So, as happened to us a few months back, we had had our fill of burgers, wings and typical bar foods, and felt the need to branch out to something a little different. And now that Shane is addicted to sushi, we knew Cilantro would be a perfect choice.

The place is much bigger on the inside that I anticipated. Being that it’s a storefront in a downtown area, I wasn’t expecting much past the seating area you can see from the large front windows. This was where we sat – and while we never got up and wandered around (because, well, I think they tend to frown on that in restaurant settings), we could see the large bar from our seats, as well as a back room area that looked even larger than where we were seated.  I think there’s a patio, too, so this place may possibly end up as a contender come summer patio season.

A quick side note for those who have sports obsessed husbands like mine – Cilantro does not have televisions. So when dining on a night when, say, the Browns are announcing their upcoming schedule, be forewarned that you’ll hear a lot of grumbling that he can’t watch ESPN. And that of course this would be the week we don’t go to a sports bar. Because apparently its important to hear live commentary as the opposing teams are announced? Whatever. Let’s just say that Shane’s phone spent a large portion of the evening in my purse after he spent a large portion of the meal looking at Twitter.

BTW, those of us not watching Twitter spent a good portion of our time there trying to determine if the table behind us was on a first date or not. And that’s just good fun. See what you miss out on when you’re on your phone, Shane?

Anyway, onto the food. Amanda had the pad Thai and a Philly roll, Shane had the chicken teriayki and a California roll, I had the pepper garlic with beef and a cucumber roll, and Ted had the Dragon roll. All this of course accompanied by the usual three Miller Lites, and a beer I can’t pronounce for Ted.

Anyone know where I can find a glass?

The food was excellent. I don’t think any of us had a bad word to say about it. And the portions are very generous – both Amanda and I left with doggy bags. Honestly, we probably could’ve just ordered a few different kinds of sushi and shared that among the group of us – but with the prices so cheap (about $4 – $5 for each of the rolls, and then $10 or so for the entrees) it was easy to order both. Plus you know how we like to challenge the size of the table to contain all of our food. 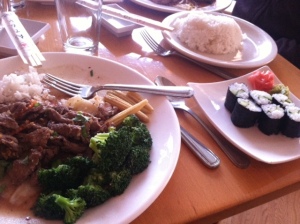 Oh, hello there not bar food 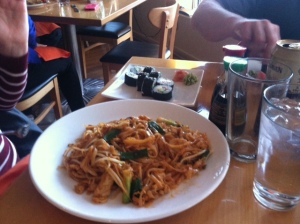 Ted always gets something interesting looking at Asian places

Cilantro has an early closing time – 9:30 on Wednesdays – which meant of course that we went elsewhere for drinks after dinner, because, well, we like to pretend we all don’t have to get up early the next day. We headed back over to 69 Taps – a place we seem to end up often for drinks whenever we’re downtown, but none of us are quite brave enough to eat at.  Well, except Ted … so that means they must not put cheese on anything.

Anyway, Amanda and I were thrilled to find out that Summer Shandy was back on tap. Ted ordered the darkest, heaviest beer on the menu. And Shane twice ordered something that smelled like grapefruit without meaning to or particularly liking it. Go figure.

Oh, and while we were there we were witness to yet another first date, which led us to believe that apparently Wednesdays are becoming the new Fridays. But then again we’ve known that for a while. Just call us trendsetters.

Because we’re all about checking out new places – and also because we’d had several beers – we made a quick stop at the new GetGo on the way home to check out their made to order menu. We didn’t order anything, so I can’t rule on the quality – but just judging on the menu as well as the location in proximity to our house. it looks like Sheetz may have some competition for our post-drinking snacking. Plus, they have a milkshake machine!?! I don’t see how you can possibly go wrong with that. They also have indoor and outdoor seating, so looks like we may have a new place on the WTGW list … Ha.

Oh, and because I decided we don’t take nearly enough interesting and/or fun (read: stupid) pictures as we used to when we first started out on WTGW, this week we debuted a new challenge: taking a picture with something interesting in the restaurant. Because this was the first week, we didn’t really go all out (see pictures below of Shane trying to hide in a plant) … but you can see how this could get fun, right? Stay tuned … 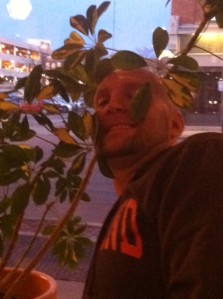 Um, I can still see you 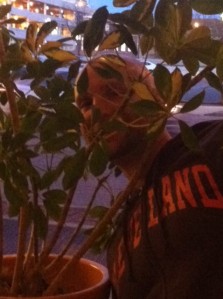 I think he finally nailed it

Picked by:  Amanda
Drinks: Nice to see they had the old staples on tap, as well as traditional drinks like sake and craft beers.
Food: Generous portions of great tasting food. Nothing to complain about there.
Service: Good. I think the waiter may have been slightly frightened of our table, but we’re pretty much used to that by now.
Overall: I’d like to think we’ll be back, especially once patio season hits.