I guess it was only inevitable, right? I mean …

Consider that your warning.

Larry’s Main Entrance is located on W. Market St., right next to Ken Stewart’s Grille. Apparently this is the part of town where we just put our names on businesses instead of coming up with some catchy title. I wonder if Larry and Ken know one another? It’s like Sesame Street.

Since the place is basically a storefront on a fairly busy street, we were slightly confused on where to park upon our arrival at Larry’s. But we quickly discovered that if you look kind of lost and smile nicely at Ken’s parking attendant they just might let you park in the lot they apparently borrow from Jiffy Lube (not “Tom’s Liffy Lube”? Someone didn’t get the memo.) across the street. Seriously, I’m not sure where you’re actually supposed to park for Larry’s Main Entrance, but this worked out OK, so I’m not complaining.

Also confusing: the entrance itself. 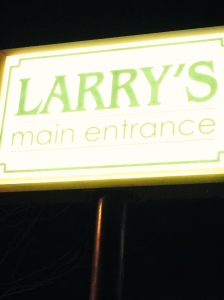 Larry’s is another on the list of top contenders for tiniest dining establishments. We seriously have to start finding places with more than 10 tables. OK, so this place probably has at least 15, but we were still lucky to grab the very last one big enough for our party of four. Four. Thankfully our WTGW group isn’t bigger than a bobsled team.

For drinks, Amanda and I went with the Miller Lite drafts. Talls. And they came out ice cold, as in with a glacier ice cap on the top. Nice.

Ted went with Christmas Ale, and Shane had bottles of Angry Orchard. The beer list isn’t that extensive, although given the size of the place I’m not sure where they’d put it if they had more, so that’s probably a good thing.

Our server, upon hearing this was our first visit, highly recommended the sauerkraut balls for our appetizer. So we ordered that – because, well, we’re gullible. And also the calamari – because, well, Shane loves calamari.

Neither was that outstanding. The calamari was freezer to fryer, decent taste but nothing original. Although Shane claimed the marinara was really tasty. The best word we could use to describe the sauerkraut balls was “interesting.” The sauce that accompanied them was a zesty cheesy something-or-other (yes, that is the official name of it – at least at our table), which neither helped nor hurt the flavor.

Larry’s is known for the burgers, so of course that’s what we ordered (see “gullible” above). Amanda had the mushroom and swiss, Ted and I both went for the Buffalo burger (a regular cheeseburger made with bison meat) and Shane had the bleu cheese. Which had real bleu cheese dressing on it, not crumbled bleu cheese. The server made that clarification when he ordered, which was probably a good thing.

My burger was fine, nothing special. My biggest gripe was that I specifically ordered it without onion, and got this:

Ted said his was OK as well. Nothing to write home about.

And the same verdict from Amanda, but here’s a photo of hers just for fun also. 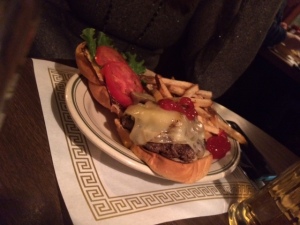 Probably the biggest complaint of the evening came from Shane, with regards to the “doneness” of his burger. He’s on a quest to get the perfect “just right pink” burger, and had a lengthy discussion with our server about medium vs medium rare. Scarred by his “nearly eating live cow” experience at The Rail a few months back, he’s abandoned his usual rare order and now typically orders medium. And is quickly realizing that means very different things at every restaurant.  As in, some places that’s closer to well done, and others it’s practially still mooing. At Larry’s he ordered medium, and the server even made a note that he wanted some pink – but when his burger arrived it was still brown all the way through. Disappointing, and most likely greatly influenced his opinion of the place in general.

Overall Larry’s isn’t a horrible place, but there’s really nothing overwhelmingly impressive about it either. With only two small TVs over the bar, it’s not really the place to go if you want to watch sports. Also, there was a weird burning smell coming from the kitchen (or at least that’s where we hoped it was coming from anyway) at various times throughout out meal. Call me crazy, but that isn’t the most pleasant aroma when you’re awaiting your meal. Although maybe that was them chargrilling all the really well done burgers? Who knows. And did I mention it’s kind of tiny?

Plus apparently people – like the ones seated just behind us – like to bring just-barely-learned-to-walk toddlers into the place, and let them roam free while they enjoy their drinks. Because that’s fun and safe in a bar.

We did find one fun thing we liked for sure: chalkboards in the restrooms. There’s an interesting and fun (although not exactly hygienically appealing) party trick. Also the start of many “for a good time call” threats at our table.

Being the night before Thanksgiving, we had to pretend as if we weren’t a group of late 30-somethings, and go out to join the “biggest party night of the year.” I guess those crowds don’t come out until well past 10PM, because we definitely didn’t see them. Hit up the downtown Akron Barley House, and then the Red Fox, and both were moderately dead. But they did serve yummy shots, so I guess that counts for something, right?

Sidenote: we’ve decided to start a new feature on WTGW, and that’s our “Thumbs Up, Down or Middle” rating system photos. Essentially this is more for my benefit, so I can remember exactly how everyone felt about the place when I go to write this blog, but since we’ve got the photos, why not share with everyone, right? So here you go:

Picked by:  Amanda
Drinks:  Not a huge draft/bottle selection, but good enough for us.
Food: OK. Nothing overwhelmingly special, but definitely not horrible.
Service: Good. Our server seemed kind of excited that we hadn’t been there before, and was helpful.
Overall: “Thumbs middle.” If we lived down the street and this was our neighborhood bar, we would definitely go back. But overall nothing special compared to all the other places we’ve gone to, so we won’t go out of our way to go back.