So there’s a sign outside of the Windsor Pub that proclaims they have “the best burgers on this Earth.” And since we’ve been on a burger streak lately I guess it’s only fitting that we venture in and find out how close to reality that statement is.

Although, side note, “this” Earth? What other Earth might we be talking about here? I mean, in fairness, that sign looks like it’s been up for a hot minute, so maybe at that time we really were into the “life on other planets” debate. And god forbid we insult their burgers, I guess.

Anyway, I have to admit that the Windsor Pub isn’t much to look at – from the inside or outside. It’s on a stretch of road where a lot of the bars are actually semi-seedy strip clubs. And those that aren’t are, well, pretty much like this one:  dive bars with a base clientele that haven’t been updated in 20 years.

Not that there’s necessarily anything wrong with that. I love me a good dive bar, and I think we all secretly wish for the Cheers-esque greeting whenever we enter one. I grew up frequenting a similar place with my dad, sitting at the bar drinking Pepsi and getting schooled in the finer points of billiards and Atari baseball with stick figures.

(BTW, these days spending the afternoon at the neighborhood bar with your friends and your 4-year old would probably be considered bad parenting. But in the 80’s that was just called “babysitting.”)

However, the irony of the Windsor Pub having a floor mat at the front door advertising the new season of Bar Rescue was not lost on any of us, as I think we all agreed that this place would probably be a prime candidate for that show. Not that I think it’s necessarily hurting for business – there seemed to be a good crowd of regulars there at 7:00 on a Wednesday night – but just the overall decor begs for a bit of an upgrade. Like seats with springs that aren’t trying to reach out and steal fries from the table next to you.

And we’ll get to the bartending skills later.

As with most dive bars, there’s a very small list of beers on tap. Here this included all the usual domestics and then Fat Tire, which Ted and I both went with. Amanda had Miller Lite. And Shane ordered Rum and diet … which in a strange twist actually ended up being lighter in color than any of our beers. So there’s that.

Which is lighter, the beer or the rum and diet?

We ordered appetizers, because, well, us. But this was clearly a rookie mistake, as I’m sure anyone who has ever eaten at this place will tell you. You either order apps, or a meal. Never both. I don’t care if you haven’t eaten for three days, or if this is your last meal before a starvation diet. Just trust us on this.

Now, to be fair, our waitress warned us that the actual meals – and in particular the burgers – were giant. But this was after we had already put in our appetizer order and she had come back to take our meal orders, so no take-backsey’s. And thanks for the head’s up. We had ordered pretzel sticks and onion rings, and basically should’ve just taken that money we paid for those and fed it to the hungry springs in the seats underneath us because we barely even touched either of them.

OK, I’ll admit I had a pretzel stick – because, well, I love carbs. But the onion rings in particular were way too greasy and heavy to even think about eating – especially since our meals arrived about two minutes after the apps, and we about passed out from the amount of food we were staring at on our table after that.

Since burgers were the specialty, and we had to test the validity of the outdoor sign, naturally that’s what we all ordered. There are two sizes on the menu for the burgers – a regular and a junior – and  the waitress was nice enough to explain to us that she can only just barely finish the latter of those options. Amanda and I both appreciated her telling us that, because in all honesty “junior” sounds like the kid’s version, and we all know that both of us girls can handle our meat.

We ended up with three Windsor burgers (which include onions, mushrooms, mayo and cheese) and one Rocket burger (which has salami, pepper rings and ranch dressing. And usually cheese, but this one was without – because, well, it was Ted’s). Boys had regular size and girls went with juniors.

(Interesting side note: when the meals arrived, only the regular size gets a knife to cut them with. #discrimination) 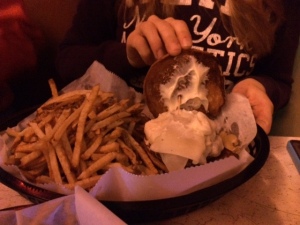 Have some burger with your mayo

So as we were placing our orders, the waitress didn’t ask how we wanted the burgers cooked, something all of us overlooked. Except Shane. Of course. So naturally Mr. Particular asked if he could do his medium rare – and she said no, all the burgers are done well. And that there was a reason for that but she couldn’t remember what that reason was.

I could tell Shane was scared, but he wasn’t going to back down.

And he was glad he didn’t. Because the burgers are delicious. They’re large, fresh made – they crumble apart but not because they’re dry. They have really good flavor. And they’re so, so filling. Almost too filling. I really wanted to eat the last of the potato wedges I’d gotten with my burger, but I literally couldn’t fit another thing in me. Even beer was a challenge. And that was on the junior size burger. I can’t even imagine if I had ordered the regular size. 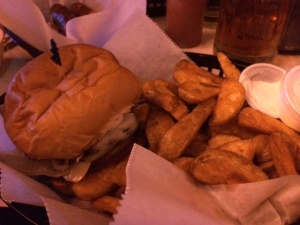 It’s still a potato, but somehow the wedges make it fancy

Or, better yet, the “Windsor Challenge,” which we saw a sign promoting on our table. What’s this, you ask? Oh let’s see, just THREE of the regular sized Windsor burgers stacked on top of one another. Three. That has to be, like, an entire cow. And if you can eat it in 30 minutes you get it for free. Along with a side of heart disease and high cholesterol.

So, remember Shane’s rum and diet that was lighter than our beer? Yeah, by the end of the night we were marveling at the fact that his drinks only seemed to get clearer. By the time we watched the bartender pour his third drink, I think one of us was ready to pull out our phone and get John Taffer from Bar Rescue on speed dial. Three long pours and a splash of coke in a tall, skinny glass. What? You may as well just give him the bottle of rum and a straw at that point.

Although when we got out bill at the end of the night, we realized that the waitress had forgotten to charge us for two of those tall drinks. Which we promptly pointed out to her, because a) we’re honest and b) it was only going to add $4.50 onto our bill. That’s right, the one drink she did charge us for was $2.25. Holy crap.

Or an alcoholic’s version of heaven. Whateves.

In any case, I’m fairly positive this won’t be our last trip to the Windsor Pub. While the decor and ambiance leave a little to be desired, the food was excellent and the prices are definitely worth it. I mean, for under $10 you can get a giant burger, fries and a draft beer (or half a bottle of rum, take your pick). How can you complain about that? 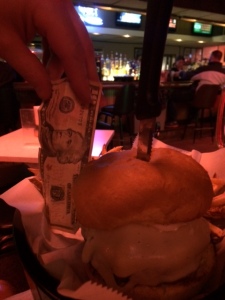 That burger is half a ten dollar bill. Size and money-wise. 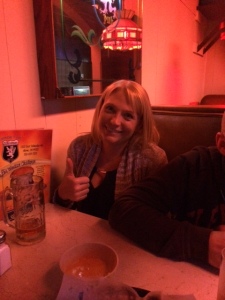 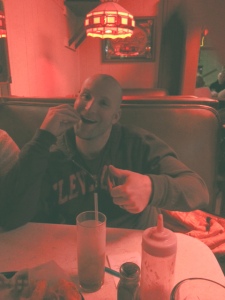 Shane (noting that his rating is based on the giant burger)

Picked by:  Ted
Drinks: There’s nothing special about the beer list, but it’s cheap so you don’t complain. If you’re an alcoholic, though, definitely go with the mixed drinks. Because you get about a quarter of the bottle of rum in a tall drink. For $2.25.
Food: We can only speak for the burgers, but we dare say that sign out front is damn close to the truth.
Service: Good. I mean, forgetting to charge you for drinks is far better than overcharging, so there’s that.
Overall: This is another of those “we really wish this place was closer to our homes” examples. Great low-key, dive bar atmosphere with good food and cheap drinks.