Alternate title to this post: always judge a Mexican place on their ability to make margaritas.

More on that in a minute.

So, since Ted was enjoying a week in Florida and didn’t even consider the option of flying back just to participate in WTGW (boo, hiss), I took advantage of his absence to choose one of the lesser chosen WTGW ethnic foods – Mexican. You know, because they usually slather everything in cheese, and we all know by now that’s like Ted’s version of hell.

I was told about Tacos Mexicanos by a coworker, who said she drives past it every night on her way home and that it was always packed – particularly on $1.00 “Taco Tuesdays.”

Needless to say, since tonight was not a Tuesday, nor were the tacos $1.00, it was a little less packed this evening. Just keep that in mind as you read on.

I noticed on the specials board as we entered that they were featuring a pumpkin margarita. My initial reaction was that that sounded kind of interestingly gross … but then I thought what the hell, it is fall after all, and if they can pumpkin out everything from cream cheese to potato chips, I may as well give it a shot.

The best way I can possibly describe this drink is that is looks like butternut squash soup, but tastes like tequila with a bit of a spice aftertaste. 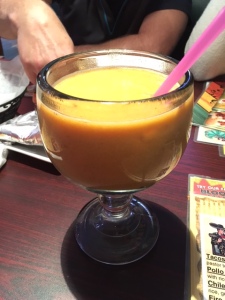 Margaritas should not be this color. Ever.

Shane and Jerrid both opted for the mango strawberry margaritas. And I was extremely jealous … until Shane eventually took pity on me sitting there sullenly stirring my margarita and traded his mango strawberry for my pumpkin. Not because he thought mine was good, mind you, but more because he was worried I would waste alcohol. Priorities.

Yeah, well, the mango strawberry isn’t much better. It was basically a crapload of tequila, with a little bit of some fruit flavor that tasted neither like strawberries or mangoes.

So that begs the question, how can you trust a Mexican place that can’t make a good margarita? It’s like sacriligious.

It was about this time that Amanda realized she and Jerrid had actually been to Tacos Mexicanos once before, back when the place first opened … and they didn’t have their liquor license yet so they couldn’t serve alcohol.

I might suggest they go back to that idea until they hire a bartender that knows more about mixing drinks. Until then it seems they’re just wasting cheap tequila.

So onto food. Since all the pictures kind of look alike (as you’ll have at a Mexican place), I’ll try to keep these straight.

Amanda got the burrito Mexicano.

Mexican stuff in a shell with sauce and cheese, take one

Jerrid got the beef chimichangas. 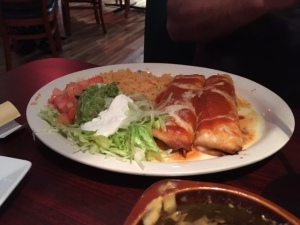 Mexican stuff in shells with sauce and cheese, take two

I got the fire burrito.

Mexican stuff in a shell with sauce and cheese, take three. No wonder they only have like three things photographed on the menus

Shane got the quesadilla skillet – after much debate since they didn’t have his usual fajita quesadilla. 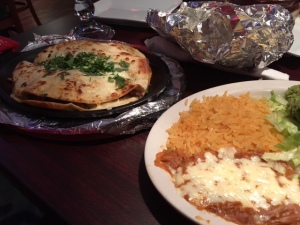 All of the above was just OK. None of us really had anything much specific to say about it – I mean, it was typical Mexican food. Put lots of meat, sauce and cheese into or on top of a tortilla shell, then serve with rice, beans, more sauce and more cheese. Repeat.

Shane did mention that his quesadilla could’ve used more filling. And I will say that I agree with that. Mine in particular was pretty much just shredded chicken inside the shell, no veggies or sauce or anything. Because that screams flavorful.

Although somehow that did make it super hot. Must’ve been the sauce on the top – and maybe I should be glad there was none inside, because wherever this heat was coming from, it was most certainly enough. And before all you smartasses point it out, yes, I know that I ordered the “fire burrito.” Clearly they got one thing right in this place with that title. Just one.

Also, the irony of the lack of a good margarita to wash this down was not lost on me.

So already we have two strikes … let’s just add one more with the service. For starters, part of the reason we – and I assume about half of America – go to Mexican restaurants is for the promise of never-ending free basket of chips and salsa that just seems to regenerate at your table nonstop all night long.

As usual, Amanda and Jerrid had been there for a little bit before Shane and I arrived, and were almost through the first basket of chips and bowl of salsa when we sat down. So you’d think when the server noticed two new people joined the table they would bring more, right? Yeah, no. We waited. And waited. And ordered our drinks. And waited. And ordered our meals. And got our crappy drinks. And then FINALLY someone asked if we wanted more chips and salsa. Um, yes. Was it that fact that we were pretty much fighting over the tiny scraps and crumbs at that point that tipped you off?

And then one our food arrived, Shane was waiting on his side of guac for almost as long as the refreshment of chips – and keep in mind he won’t start eating his food until he has it, so you’d think the fact that one plate was untouched at our table would be cause for a server to stop and ask how we were doing. But once again, you’d be wrong.

I guess the moral here is to stop thinking.

So by about 7:30PM, the place was pretty empty, only us and about two other tables. And yet the service didn’t get any better, considering they had fewer tables to check on. Did they send the servers home with the guests? Were there bartending lessons going on somewhere? (that I might be able to forgive, just sayin) Do they keep the actual good margaritas in the back and the servers go back and get sloshed on them after 7:00?

It’s a mystery, folks. And one I’m not interested in going back to find out the answer to.

Picked by: Steph
Next pick: Amanda