OK, so you know how we often go into places and declare we’re ordering ALL THE FOOD because we’re so hungry? Or how many times the guys end up getting two full meals and an appetizer each, which prompts comments from me about the copious amounts of food we have at one table?

Well, I think we finally met our match.

A month or so ago I was contacted by one of the lovely marketing peeps at Aurora Farms Premium Outlets about our team from WTGW being food judges for their Second Annual Scrumptious Showdown – an event at the outdoor shopping center that invites various local food trucks to not only sell food to patrons but also be judged by a panel for the opportunity to win bragging rights and gift cards to Aurora Farms.

So of course we said yes – because, I mean, hello, have you met us? You want us to come out and eat stuff then tell you what we thought of it? Clearly we have no clue how that concept works.

Although I think we can all admit now that, while we know food, the concept we were a little clueless on was food judging. To say we were slightly unprepared for what we were getting ourselves into is like the astronauts of Apollo 13 telling Houston they have a problem. I mean, we obviously like food. But I don’t think in my whole life I have ever eaten so much in one 90 minute time span.

Must. Train. Better. Next. Time.

When we arrived on a beautiful, sunny Saturday we met not only our hosts from Aurora Farms, but also the rest of the judges. They had invited six judges total – all area food and event bloggers – and split us up into two sets of three for the judging so that all of us didn’t have to judge every category. Which at first we were like, wait, why, we got this. Uh, no. See above comment about ill-preparedness. Because about 45 minutes into the competition I realized the organizers were actually really smart people.

So our group had four categories to judge: best wrap, best vegetarian dish, best cold dessert, and best sweet treat. The other group had both the cold and sweet desserts along with us, and then “best between two buns,” which was sandwiches that weren’t wraps.

At first I kinda thought we got the worse end of that deal – why do they get burgers and sandwiches while we get boring wraps? But in the end I think we lucked out, because not only were the wraps we tried far from boring, but also all of our trucks gave us so much food that we ended up filling several take home containers.

Seriously, So. Much. Food.

There were six entries in the wraps category alone. Six. Now, granted, it’s not like we had to eat a full wrap from each truck – but you’d be surprised how quickly a few bites of each flour tortilla filled sandwich can fill you up. Especially when what’s on the inside of those tortillas includes things like meats, cheeses (sorry, Ted) and even pasta. Um, OK.

So the six wraps we tried included a BBQ chicken mac & cheese wrap from Wrap It Up, a slow roasted beef and cheese wrap from Hatfield’s Goode Grub, a chicken wrap from Wholly Frijoles Mexican Street Food, an Open Faced Cuban wrap from Off the GRIDdle, Ahi Tuna Tacos from The Beachcomber Truck, and a gyro from Gyro George.

The three of us individually scored each item based not only on the taste, but also on things like the uniqueness and presentation. Hatfield’s scored the best on all of our sheets for the wraps – the flavor was out of this world, plus they were the only truck to actually send someone over to talk to us about the dish and how it was prepared, so that definitely scored them points for presentation. They ended up winning the category.

As far as other standouts, the mac and cheese burrito definitely got points for originality. And it should be noted that Ted The Cheese Hater’s first words were “well that cheese isn’t so awful,” which anyone who reads this blog regularly knows to be a compliment. This was also the first item we were presented with after we’d pretty much starved ourselves all morning to be ready for this event, so we had to remember to pace ourselves and not eat the entire thing at once. In the words of a wise person being interviewed by a TV station at a Browns tailgate (i.e.: me), “it’s a marathon not a sprint.”

The Cuban got points for originality, but the meat was slightly dry. The chicken burrito was good, but lacked the uniqueness of some of the other wraps – if you’ve been to Chipotle, you’ve had this item. Ted liked the ahi tuna wrap … but Shane and I thought it lacked flavor. Although I do think mine was missing a lot of the pineapple-y sauce that Ted raved about, so there’s that. And the gyro was very tasty – but, again, it’s not that original (I mean, really, how can you change up a gyro?). But we did appreciate that he gave each of the three of us an entire gyro meal – a sandwich, cheesy fries and baklava – so you now that was going down as dinner later. Thanks, Gyro George. You may not have won the vote, but you won a special place in my stomach for that move.

In the vegetarian category we only had three entries – a stuffed mushroom served in a cute little mini martini glass from Robesto’s Catering, black bean tater tots with a dipping sauce from Off the GRIDdle, and a vegetarian taco from Wrap It Up. The guys were wowed by the mushroom – or maybe just the tiny doll sized martini glasses, it’s hard to say exactly, but they couldn’t stop raving about it. Meanwhile, I was more of a fan of the veggie taco. The sauce on it was so flavorful and a touch spicy without blowing your mouth up. We all thought the tots were super original – and also really good. Personally I would order those in any restaurant. So we were all across the board individually in our scoring, but after the votes were tabulated later it seemed the mushroom in the tiny glass took the prize.

Damn you boys. No more getting wowed by plastic ware. I mean, come on, I didn’t even take a picture of it so it couldn’t be THAT impressive. Sheesh.

So by now you’re probably hungry after reading all that – but we definitely weren’t after eating it. Which means we were absolutely thrilled to find out we still had two categories left to judge. Yay!

And of course it’s my favorite – desserts. Can we please do these FIRST next time? I mean, seriously. I need to leave more room for these things.

They split the desserts up into two categories: cold, and, well, basically not cold. Personally I think that was just a ploy to get us to walk around a bit more and try to work out a corner of our stomachs for all of the remaining food – but hey, they’ve been smart so far, so I didn’t question them on this either.

For cold desserts there was a turtle sundae from East Coast Custard, iced coffee from Floured Apron, and a cherry chunk custard from Stoddards‘.

I was a fan of the cherry custard – I thought it had good flavor, with just the right amount of chunks in it (that sounds way more disgusting that it meant to, really). A lot of the other judges seemed to like the sundae, but for me there were too many nuts involved. And yes, before you say it, the guys didn’t miss out on the opportunity to joke about that sentence once I made the mistake of letting it fall from my mouth.

But overall in that category it was the iced coffee that won. It was very good, and we did get a nice explanation from the owner about the type of coffee she uses and how it’s brewed. And I have to believe the pink flamingo straw played a big part into presentation.

I mean, come on. How cute is that?

After we cleansed our palettes with cool treats, it was time for the final category of the day – sweet desserts. At which point the organizers said to us “OK, it’s time for the sweets category, let’s all head over to Jackpot Chicken for our first entry …” Wait, what now? Did you just say “desserts” and “chicken” in the same sentence? That’s like saying let’s go pick out some shoes from Pet Supplies Plus. Hmm.

Turns out they were serving warm apple empanadas. Which were somewhat tasty, although really sticky and difficult to eat until someone chased us down some plastic silverware. Negative points for presentation, thank you very much.

We all also had a laugh when one of the other judges from the other team approached the chicken truck to ask what the shells of the empanadas were mad of, since they were orange and that’s slightly unusual. The answer was this stellar and clearly well rehearsed marketing line: “I don’t know, we buy them frozen.” Genius. Maybe those people should be here showcasing their product instead of you. Just a thought.

After that it was two kinds of cupcakes, a buckeye cupcake from the Sweet Mobile Cupcakery, and a S’mores cupcake from Floured Apron.

While they were both tasty and very well presented (including talks from the owners of both trucks about how the cupcakes are made and why they chose those particular flavors to have us judge), Floured Apron took the majority of the vote to win that category.

Get out the brooms, folks, because that’s a SWEEP for Floured Apron in desserts. Nice job, ladies.

In addition to our judging, people purchasing food from the trucks had the opportunity to place votes for the day’s “Fan Favorite” – which ended up going to Gyro George. 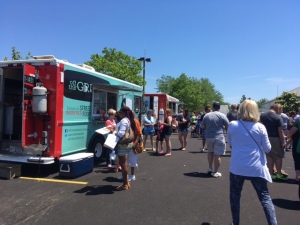 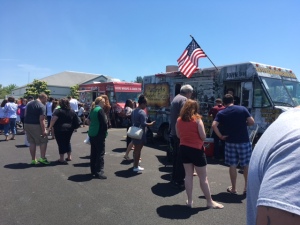 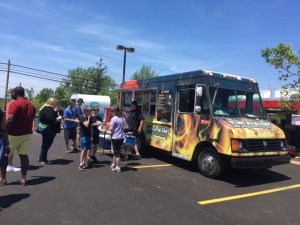 Overall it was a great event. Whoever put the order in for the weather must be better friends with Mother Nature than I am, because we had a picture perfect day to be walking around outside. And regardless of what our stomachs might have to say to us on the subject, we all thought it was fun to be judges. Even as we were unceremoniously stuffing those last bites of cupcake into our mouths, we still realized we were lucky to have been asked to be a part of this fun and interesting event.  Thank you to Aurora Farms for inviting us, and for trusting our sometimes super picky food tastes to judge these trucks and their amazing dishes. We’ll definitely do it again!

That being said, does that give us an excuse to keep ordering ALL THE FOOD so that we can stay “in shape” until next year? I mean, if we tell our doctors we’re “training” for something, that makes the weight we’re sure to gain acceptable, right?