So as we pulled up to this week’s pick, I made a comment that I think it may well be the smallest building we’ve ever been to. It was like Red Riding Hood walking up to her Grandmother’s cabin in the woods.

It may also potentially be the only place we’ve visited for dinner that you can buy a bag of ice from one of those weird cooler machines located just outside the front door. You know, in case those leftovers need some refrigeration on the drive home, I guess.

Aunt Mildred? Are you home?

This was what greeted us as we walked through the front door. Which almost caused Shane to turn and run in the opposite direction, lest his pick be the dive bar version of our infamous Gus’s Chalet. And of course he can’t have that on his record.

Continuing the “we’re just trying to get inside the front door” obstacle course: an older man steering a very drunk, teetering on the edge of passing out older woman through the front door past us.

So far we’re painting a lovely picture, I know. But at least things got better.

The place is definitely tiny inside. But homey, as Shane called it. Maybe in part thanks to these lovely purple-ish table lamps on half of the tables in the place. Classy.

I mean, I’m sure they were like $5 each at Big Lots or something like that, but it’s the thought that counts?

We were greeted by quite possibly the softest spoken bartender we’ve ever encountered. It was like she was whispering most of the time. Or maybe we’re going deaf. Either of those are a good possibility. She was super nice, though, and always checked on us when our drinks were low throughout the course of the evening – but every time she left I think we felt like we were on the Seinfeld episode with the low talker.

Ted asked about dark beer, and was told there was Shiner Bock, or Yingling, which is “kind of darker.” So, no then. He started with a Shiner and then switched to a jack and coke after the first round.

Shane got a Bud Light and I went with a tequila and soda. Two things to note: they have no draft beer, only botttles … and they pour heavy. I mean, we’re not talking Windsor Pub heavy, but still more than I was expecting.

The menu was bigger than the entire interior of the restaurant, I  think. Very unexpected for a little dive bar. Although when we saw the cook come out of the kitchen and retrieve items from a freezer strategically placed on the other side of the dining room it kind of put things back into perspective a bit.

We tried to order the breaded mushrooms as an app, but were told they were all out. Actually we knew they were all out prior to the low talking server coming to tell us, because we saw the cook consult the freezer, then call the server over to have a little chat. So at least we had time to prepare ourselves for the disappointing news and decide on an alternative. We chose the poppers instead. And calamari. Because, well, all the apps were like $4 each, and we clearly like food, so why not.

The calamari was OK. It was definitely straight from that freezer in the corner, as all the pieces looked like onion rings. And after eating a few of them I identified the breading as being the same as what they use on cheese sticks. So in a way they were really just some onion-ring-cheese-stick-with-no-onion-or-cheese hybrid. Interesting. Kudos to the server for asking us if we wanted some sauce to dip them in, as they usually don’t come with anything. She suggested marinara. I’m thinking after enough requests for that she must have this down pat. 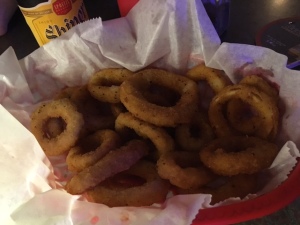 Onion rings or calamari? Your guess.

We were hopeful that maybe the poppers might be homemade instead of frozen, since they arrived looking a bit ununiform – but alas we were wrong. They honestly didn’t have much flavor, which was disappointing. But at least the breading wasn’t the same as the calamari. So there’s that.

Another product of the dining room freezer of wonders

Ted was tempted to order the tilapia entree, since he thought something other than burgers sounded good. But then he noticed the line “if it smells like fish, eat it” on the menu above the seafood section, and that kind of changed his mind a bit. Interesting marketing. If our table was any indication, they may want to rework that.

He went with the Blazin Burger instead. Which the name apparantely doesn’t lie on. He said it was super spicy, that whatever the white sauce was on it (which I think we all thought originally would be some sort of cheese sauce) was really super hot. And that it may even make him sweat. That’s a tall order from someone who once ate a habereno pepper and tried to play it off like it was no big deal

Watch out for that white hot sauce from hell

We asked the server about two burgers on the menu – the Theo’s Best and the Bad Kitty – since both of the descriptions included “lettuce, tomato, swiss cheese and mushrooms.” Like, OK, what’s the difference? Other than a 75 cent price differential anyway. She said one is bigger. And that people always ask her about that. Well, of course, why change the menus, let’s just keep answering questions. Duh.

So I got one and Shane got the other. Mine (supposedly the smaller one) arrived on a regular bun, while Shane’s (supposedly the larger one) was on a hoagie. And when you looked at his from the side you could tell there was more meat in his … but not by much. Like maybe mine was 1/4 lb patty and his was 1/3 lb or something like that.

I mean, it’s 75 cents that separates one from the other, so we get that it wouldn’t be a whole other patty included … but still. It seemed like such a small difference to even warrant two separate line items on the menu. Not to mention stocking two separate sizes of buns. But OK. 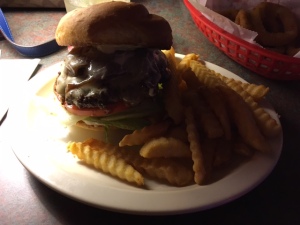 That classy lamp messed with my photo skills

We all pretty much agreed that overall the burgers weren’t big enough. I mean, they’re also like $5 each – so I guess we shouldn’t be too picky – but it seemed like they could up the size of the patties overall just a bit. As Ted said, the actual burger was almost secondary to all of the other stuff going on in there. Like you need more meat to compete with all of the toppings. (that’s what she said) He said that he would be willing to pay an extra $2.50 or so to get a whole other patty on the same sandwich, or at least have some sort of option like that for all of the different burgers on the menu. Because, you know, we’re kind of experts on this stuff by now and all.

We also all agreed that the crinkle cut fries (added on for another like $1.25 or $1.50 to each sandwich) were perfect, though. I’m partial to crinkle cuts to begin with, but these ones were done exactly right, crispy on the outside without being mushy on the inside. And they were hot. Perks of a small place, I guess – not much time from kitchen to table.

Theo’s is another of the many places that now has one of those Queen of Hearts drawings on Wednesdays nights (ah, the joys of marketing), so we each ponied up some cash to join in. None of us won, but a guy at the bar has his ticket pulled and the card he turned over earned him $100, so he did want any good alcoholic does … spent his winnings on more booze.

That worked out well for us, as he announced he was buying the whole bar a round of drinks. Which sounds impressive, until you consider that there were eight people total he was buying for, including himself and his wife. Well, 10 if you count the cook and the server, who also helped themselves to a drink of choice. But hey, we weren’t complaining, and Ted turned around and bought a drink for the winner and his wife in return also to say thank you from our group.

Of course that extra drink left us all a little bit cheerier as we left Theo’s – and it was in some ways a cool little place, but again, as with so many places we visit, not sure if it’s worth the drive to return all that often. However, mine and Shane’s tab, for two mixed drinks, two bottles of beer, two apps and two burgers with fries: $38.75. This is why we love dive bars, folks. We’re cheap dates. 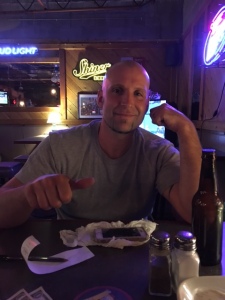 Picked by: Shane
Next pick: Steph