‘Twas the week between Christmas and New Years, and once again it’s Ted’s pick. And once again he takes us to a busy place near the mall in Fairlawn. Anyone remember last year when we tried visiting two different new places, only to find them both full of holiday celebrations .. and finally ending up at the all-you-can-eat sushi buffet down the road?

Yeah, you may not, because I didn’t write a post for that evening. Mainly because I couldn’t keep up with the guys filling their plates in their seemingly never-ending quest to be full of sushi.

So instead this year we get to witness their never-ending quest to be full of pizza. The only thing Shane may like more than sushi in this entire huge world of food.

Spoiler alert: at one point in our evening at Dewey’s our group of five adults had four pizzas and a calzone on the table in front of us. No, we don’t overindulge when we eat. No way.

And before anyone points it out, yes, we get the irony of Ted being the one to pick a place that specializes in things covered in or filled with cheese. He did this to us last year with Melt, too. I think it’s his way of keeping us on our toes. Or maybe we really are running out of places to pick after 3+ years of doing this.

The wait at Dewey’s actually wasn’t too long when we arrived, and I think the fact that we had to wait at all had more to do with us being a large group of five in a place that’s pretty small for a local chain restaurant. It’s set up pretty similar to the ones in the Cleveland area, but this one is kind of like dollhouse sized compared to their regular adult sizes.

I’m not sure why they have a bar at the back of this one, either. Seems like wasted space where they could’ve – I don’t know – put more tables. Or something. Just a thought. I mean, you only serve like six craft beers and some select wines, do you really need a horseshoe of barstools around the cooler? Are people seriously just saying “Hey, let’s pop into Dewey’s and get one of these six beers that I’ve really been craving today?” Or are there people out there who can’t enjoy alcohol and food unless they actually sit at a bar to partake in it?

On the topic of poor design … so originally our group ended up being crammed into a booth, I believe maybe just for the sake of seating us and getting our orders in since pizza can take a hot minute to prepare. Or maybe we looked like the type that would cause trouble in the waiting area if left alone for too long. Who knows. But I think as soon as the server heard our order of enough food to feed an entire youth football team, she knew this seating arrangement wasn’t going to be a good fit. Or rather a fit at all. Simple math tells you that four pizzas that are each 11 inches or larger do not fit on a booth table. Hell, we barely even fit in the booth ourselves – as it was Ted was moored to the end of the table by a single chair. We joked that he might have to set up his dinner on the stack of high chairs off to his right. Because that seems appealing.

It was also about a billion degrees in that corner. Or maybe it was just the body heat of all of us crammed in there. I mean, I appreciate a tropical island temperature as much as the next person, but not when I’m dressed for the -10 wind chill that is NE Ohio in late December.

In any case, we enjoyed our first round of beers on this, our own little tropical oasis, as well as mine and Cassi’s peppercorn ranch side salads that we ordered as appetizers. Or, rather, one large salad that we ended up splitting after the server suggested it would be cheaper for us to just to that than get our own individuals. Good call. I appreciate frugality. Especially when we’re on this tropical vacation and all.

Hey, a bigger table opened up! So what if maybe the server had to obviously stare down another large group, or inconspicuously whisper to them that they would offer up a handful of gift certificates to make them leave and make room or us, since the laws of physics weren’t going to allow us to eat in our current situation without one of us placing their meal on the floor. I can only say that I’m somewhat surprised we didn’t topple our current table as we all jumped to our feet at once as soon as another server arrived at our table and announced that we could move if we wished.

Let’s just say that was a true blessing, because this new, larger table still came close to almost causing one of us to eat out of our laps. I mean, we could probably create one of those math word problems just to figure out the exact size of our table (“If five people order four pizzas and they cover the entire width of the table, how large must the table and the pizzas be if the sizes can only be 11, 13 and 17 inches?”) But I don’t like math, so we won’t go there.

A nice feature of Dewey’s is that they have an entire menu of specialty pizzas, and you can split any pizza in half, no matter the size, so that you can try a few different specialty pizzas at once. Or plausabily split one pizza with a larger group who may disagree on what they want to order. But we wouldn’t know anything about that theory. Obviously.

So with all those options, it makes total sense that Ted got a full Don Corleone pizza. Just one kind for all 13 inches. No splitsville for him. At least he’s definitive. 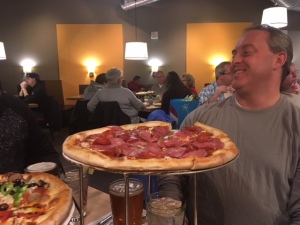 Ted and his meat pie. Wait, that sounds bad

Jason got the half southwest BBQ and half Bronx Bomber. His was a 13 inch as well.

I guess I lied before. Here’s a few more vegetables.

Not wanting to play favorites on who would be his “food soul mate” for this trip, Shane chose half of his as the Don Corleone, and half Bronx Bomber. So if you’re following along, that’s half of half of Jason’s and half of Ted’s.

Remember that whole thing I mentioned about being able to split pizzas when people at the same table want the same order?

This also explains why all of our pizzas look somewhat similar. Trust me, I’m trying to keep up, too.

Well, OK, so you can tell which one is Shane’s pizza because someone (read: me) convinced him to get the 17 inch. You know, the largest one. For himself.

This is what good wives do, people. Take notes.

Cassi got the 11 inch half porky fig and half caprice. Hers is the baby pizza on the table. 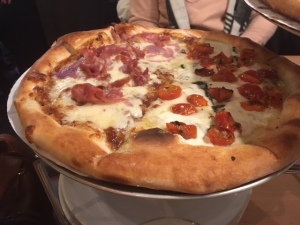 Look at all that cheese. It’s probably good this was on the complete opposite side of the table from Ted.

Meanwhile I got a calzone with pepperoni, mushrooms and banana peppers. Partially because even though – as I’ve already stated – I don’t do math, my numbers-hating brain could deduce that another pizza was not fitting on this table.

Still dough and cheese – just in a more compact form

We all agreed everything was good. Perhaps the best praise of the night was when Ted said it was “one of the better pizzas he’s ever had.” And that’s even with cheese, people. *gasp* Of course he had to refute the cheese comment by saying that there was so much meat on the pie and it pretty much overpowered anything else … so there’s that. Loopholes.

Although he later changed his story, and claimed this was actually “in his Top 5 pizzas.” Not that he really knows what other ones would be on that list, though, since we all know this isn’t exactly his favorite meal. Maybe he just felt like Shane shouldn’t be the only one holding court in the list market.

You can also judge our fondness for a place by how much we leave on our plates at the end of the night. In this case, all but one of us were all winners of clean plate awards for the evening. Jason was the first to finish his whole pizza. Cassi was going to save one slice of hers, but once Jason finished his off and there wasn’t going to be a take home box she just decieded to eat her last one and save the need. Ted also accepted the challenge and ate his whole pizza. But the last two slices were tough, and probably should’ve gone home with him.

Shane was the odd man out, taking four pieces of his pizza home for later. That couldn’t at all be because someone convinced him to get the larger size or anything. Nope.

It was about the time that they were clearing away our plates that I looked over and noticed another group of five at a table not far from us being delivered one 17 inch pizza for them all to share. Um, really? ONE pizza? They’re clearly amateurs.

I think the place has potential – but unlike the other Dewey’s up in Cleveland, this one seems pared down a little and definitely caters to the “we’re shopping at the mall and want pizza but not from the food court because I want to have a beer with it” crowd. The ambiance isn’t so great, either. Our tropical corner booth aside, it just seems a bit sterile and uninviting. There’s no memorable background music or sporting events on large TVs – and with a large open space that kind of makes it seem cavernous when it’s just snippets of conversations rising up to fill the air. It definitely has an air of “eat and get out,” not “hang out and have another beer” to it – which, again, is why the bar is a bit baffling. But the pizzas are good, and I would definitely think of them as an option for take out after a shopping trip or on the way home from work. Just don’t make me do the math to figure out how many will fit into my car comfortably. 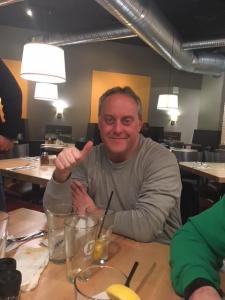 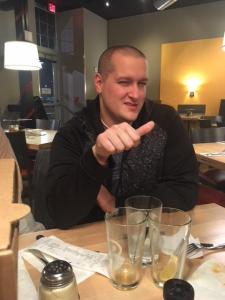 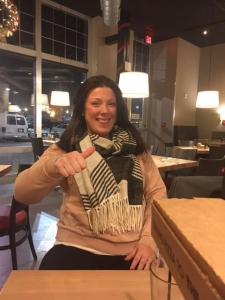 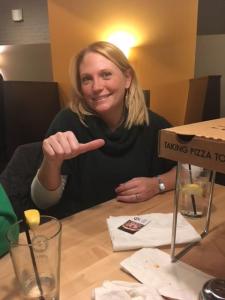