Hey we’re back on the east side again! At another place that’s literally a house in the middle of some farmlands. Cool.

Word of warning: beware of typing the address into Google Maps, as it will first drop you off on Waterloo Road and tell you to make a u-turn straight into the parking lot of a shopping center equipped with not much more than a Giant Eagle and a Johnny J’s … neither of which seemed to be places we wished to dine at this evening.

It only took the work of five educated adults on iPhones to realize that you instead have to keep driving east out to nearly Rt 44. We’re still not really sure how we outsmarted Siri, GoogleMaps and Waze to come to this conclusion, but I feel as though it should be deserving of some kind of a medal.

Our reward instead was The Hillside Tavern, which is quite literally a house, only instead of a front yard it’s a parking lot you just kind of turn into and find a spot.

We’ve been to worse places, trust me.

I think Jason and Shane would actually say that the real reward lay inside the Hillside Tavern, in the form of the largest beer we think we’ve ever been allowed to order on a WTGW outing.

That’s 34oz of Bud Lite for the drinking. When the server asked what size he wanted, Jason jokingly asked if there was anything larger than 16 oz. And I think we all thought she was joking right back when she replied that there was.

Much like Shane’s answer to the great “that must be sweet” question of 2014 … nope.

Ted’s IPA that only came in 16oz looks like a baby in comparison.

In the world of “everything here is supersized,” Cassi and I each got actual soda glasses of tequila and soda. Barware be damned!

It took Ted about 3.7 seconds to glance at the menu and announce that he’s getting the mini corn dogs. OK then.

Less decisively, Shane and I got nachos, while Cassi and Jason got loaded fries. They also followed Ted’s lead on the mini corn dogs. I mean, he was quickly sold so that must mean something, right?

Apparently that half a keg of Bud Lite went to Jason’s head rather quickly, because when Ted’s order arrives at the table, Jason grabs one, saying they look really good and he just has to try one. Like totally forgot his order would be about about two minutes later.

We also never officially claimed to prefer warm cheese on our nachos, but I’d like to make that statement right now. Because we learned firsthand that cold nacho cheese is not preferrable in any sense. Our app was pretty much like a big basket of tortilla chips with some cold cheese and a little bit of sour cream. Oh, and “bacon” that seemed more like chip chopped ham than the crispy bacon pieces I believe we were both envisioning. Like, you do know you need to cook that first before serving it, right?

It seemed like something drunk Steph might’ve concocted in her college apartment at about 3AM after stupidly passing on a trip to Taco Bell on the way home from the bar.

Oh, and the loaded fries? Yeah, samsies, just replace the chips with fries.

Next time, mini corn dogs for everyone. They were the clear winner of the appetizer party this evening.

Cassi was the odd man out this evening, ordering a steak Philly.

The rest of us went with wings.

I got 12 of the garlic parm. They were, um, interesting. 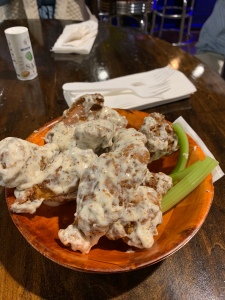 Let’ just say that I’ve never seen a garlic parm sauce to be quite so creamy. Or white.

But really, WTF? Part of me wants to ask how this was created, while part of me, well, just tried not to think about it and actually eat my meal.

I also got chips. They were like someone poured them out of a bag but them added seasoning to them so it was like they “made” them in house. Eh, OK.

I mean, at least they could’ve given me a tub of store bought French Onion dip to go along with them.

Shane got 12 of the “dry rub” which, when asked, was explained that it’s kind of a spicy Cajun. Which begs the question, why not just put that on the menu then? 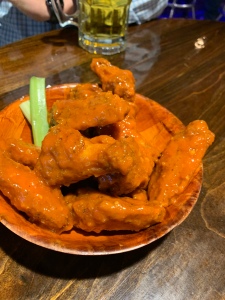 Jason got honey mustard, but only six.

The guys also decided that they needed coney dogs to go along with their wings. Because if it’s not wings and burgers with this group, it may as well be wings and hot dogs covered in chili, right?

I mean clearly it’s been established already that it’s a night for variety.

Shane and Jason each got two, and Ted – full on mini corn dogs, apparently – just decided on one.

So when the wings arrive and they’re quite literally on the jumbo side, Ted announces that he’s really glad he didn’t opt for two coney dogs. And Jason was glad he only got six wings, instead of 12.

Let’s just say that the size of the wings may have been their best quality. The taste was just OK. Shane and I – who had already decided to split our wing orders because we were both indecisive on the same flavors – kind of ended up with a Goldilocks situation, as my wings didn’t seem to have enough flavor, while Shane’s had too much seasoning.

We finally determined that if we just took them home and mixed them together we’d probably get the best result. I think I ate five wings total between the two flavors, and Shane maybe had about the same amount, as did Ted. If not less – because, well, coney dogs.

And did we mention the size of the wings?

Our server wasn’t exactly winning our hearts and friendships this evening with her briskness and – well – non-masked annoyance to our questions. She seemed irritated that we didn’t know our order five minutes after we sat down in a place we’ve never been to before. Sorry, our bad. Forgive us for being new and not harnessing our telepathic abilities to pre-read the menu that you don’t have available on a website anywhere. I mean, it’s only 2019. No need to put yourself out there on a platform that most people use to advertise their businesses these days. Cool.

It didn’t help that the food was delivered in batches as it was cooked – so she was probably none too thrilled to have to continue returning to our table when the little “food’s up” bell rang every two minutes for a good stretch of time. Again, sorry. We like food.

But her demeanor was contradicted by a group of guys standing outside who greeted us with a hello and welcome, as well as a guy behind the bar (an owner, perhaps? he seemed to know everyone there) who gave us the same greeting as we were choosing our table, and also yelled a goodbye and thanks for coming in when we left. So that’s a bit of a confusing vibe for a newbie.

I mean, lets all understand – Hillside Tavern is definitely a locals kind of place. The crowd dress code was almost exclusively hoodies and work boots, and I can imagine it being the type of place that boasts a parking lot full of snowmobiles rather than shutting the doors when we get hit with a foot of northeast Ohio snow. But part of that is due to location. I mean, it’s almost like your neighbor throwing a big party. And charging you for food and drinks.

Which brings me to …

THE HOW (much we paid)

Seems a little pricey for essentially wings and beer, no? Well, and the coney dogs, and the college frat party nacho app. But still.

I mean, knowing now the size of the wings and the deliciousness of the mini corn dogs, I bet we could come back and just get those two things, plus about six giant beers, and walk out spending less than we did this evening.

THE WHY (they may not see us again)

So the food was OK, the atmosphere the same (minus the crabby waitress) – but to go that far again for food that we had to take home to doctor up may not be in our cards. Plus GoogleMaps may be on to us now and never let us find the place again.

The best solution may be to make this a stop for a last call drink whenever we end up out this way for another pick. It’s like a reward for our travels.