So, let’s just start this by saying that I’m not sure if it’s a blessing or a punishment that the places we really, really like are no where near our house.

Honestly, though, Lager Head’s is pretty much nowhere near anything. Except horses, large open spaces, and country roads that for once aren’t named “Granger.” This place is seriously like a farmland oasis of BBQ and beer, rising up out of the pastures and cornfields. But very well worth the find.

As the full name suggests, Lager Head’s has their own brewery – so you can expect a seasonally rotating list of craft beers. But they also have bottles of the domestics like Miller Lite and Budweiser, as well as some ciders. And also a full bar and a decent list of seasonal specialty mixed drinks.

I’m sure you’re already seeing why we wish this place was, like, next door to us.

We sat in the bar (duh) and after taking a few minutes to digest the drink menus opted for pretty much going all over the board in our selections. Amanda played it safe and stuck to bottles of Woodchuck Cider. Ted tried a tall High Five IPA, later switching to a short glass of the Bed Head Red. Shane and I chose off of the specialty drink menu, with Shane taking the Southern Tea (described as their version of a Long Island Iced Tea), while I went with the Ginger Hive Five Shandy. My drink was interesting, you could definitely taste the ginger but then the bitters come in on the end and smack you.

Shane’s comment on his drink was just “it’s fucking delicious.”

When it comes in a mason jar, you know it means business

Just be forewarned, though, that the prices are not on the drink menus. Ted ended up putting out $14 for that first tall beer, and each of our drinks were like $7. Not saying it wasn’t worth it, but just be warned.

Our server was outstanding. His name was Zach (although Shane swore he heard “Brandon” somehow?? Because we can all see how they’re similar). In any case, he was extremely knowledgeable. When we outed ourselves as virgins to the place, he made a point to tell us how much he loved it there, that it’s one of the best places he’s ever worked (and he said that he’s “worked in a lot of steakhouses”) and that the training program was wonderful. And it obviously worked, because anything we asked him about he had a great response for. You honestly have to love a server who can give honest recommendations and truly tell you about the food instead of just giving the blanket “yeah that’s really good” or “well if you like lettuce then you should probably order a salad” kind of responses.

Now, granted, I will say that Zach’s answer to a lot of “how is the …” questions did come in some form of “really good, one of the best I’ve ever had” – but we didn’t think he was just telling us that to get us to order it, he actually meant it. We actually asked him at one point what he didn’t like there because then we’d know honestly what not to order.

(And just FYI, that would be the fish, the cajun chicken pasta, and basically any salad – because, well, he prefers meat to vegetables if given the choice. So there’s that.)

For an appetizer we chose pretzel sticks. Somewhat hastily, I might add, because we were definitely disappointed later on when Zach was talking about different things on the menu and mentioned something called Boars Tails, which just sounded unique and, quite honestly, amazing. Damn us for gravitating to our safety net pretzel sticks. But at least they were tasty, so while we were disappointed at not trying something new, at least we did like what we got. The sauces were especially delicious. I liked the bier cheese the best, while Shane preferred the spicy mustard.

And this is why we’re married folks. Balance.

For meals, Ted continued his trend of trying out the “Wednesday special,” and opted for the half chicken dinner. He also got a sampler of the ribs. Because, well, when you’re in a BBQ place it’s almost expected I guess. He said everything was outstanding. And that the only part he couldn’t beleive was that he still watned to eat more after he was done, given what he had just ate.

Shane got the sampler platter, after hearing Zach describe it and asking him if it would be enough for him to just eat himself as a meal (it’s technically on the appetizer menu). It wasn’t, FYI, but that could be because – well – you’ve seen the caliber of food that man puts away on most WTGW outings. A little bit of ribs, brisket, pulled pork and chicken wings (so meat, with three sides of meat) actually is an appetizer in comparison to his usual order of a burger and wings. Or an entire cafeteria tray sized pizza. I mean, come on.

But just because it didn’t fill him up didn’t mean he left unhappy. He said it was all delicious. The wings in particular were very good, made so by the hot sauce they were bathed in. He actually saved those for last after sampling the sauce. Also, note that when we talk about wings, these are the actual wings of the chicken. Like the kind you usually see in fried chicken baskets. Buffalo got nothing on these babies.

Amanda got the brisket sandwich, which was delicious but huge. She also loved the house BBQ sauce, found in bottles on the tables, and doused her sandwich in it. I got the lager melt, which was essentially Amanda’s sandwich but with mushrooms, onions and cheese sauce. It was good but messy – especially after I also added the house BBQ sauce. I had to eat it with a fork, since there was no way I could even begin to think about picking it up. 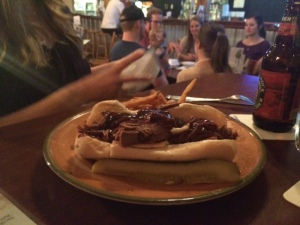 Are those gang signs in the background? 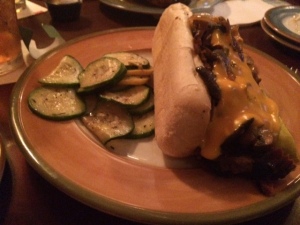 I tried to go a tad bit healthier and got the veggies as a side … which was immediately negated by also ordering a side of cornbread. Hey, corn = vegetable, right? Yeah, not in that form. I swear that small cake of cornbread weighed more than a full large mug of beer. Or a small dog.

But, hey, speaking of cake – and since the guys were still hungry after their meals of meat – they actually took Zach up on his offer when he came over asking if anyone wanted dessert. Maybe regrettably so. Before I tell you what they ordered, I’m just going to put this here.

What in the actual hell.

So, yeah, that would be a slice of the malted chocolate caramel pie on the right (ordered by Shane), dwarfed in the shadow of the GIGANTIC SLICE OF CARROT CAKE on the left (ordered by Ted). Now, we all know how much Ted loves carrot cake, evidenced by our visits to both Blue Rock and Gasoline Alley. And to be fair, Zach warned him that the slice was “massive.” But we were in no way prepared for the monstrosity that arrived on the table.

How many carrots were harmed in the making of this cake?

Even with Amanda and Shane helping – I only picked at he frosting since I don’t actually like carrot cake – Ted still had enough left over when he threw in the towel to warrant a take home box.

This is what Ted took home. You know, otherwise known as a normal sized slice of cake.

I mean, don’t get me wrong, it was all very good. Obviously. But wow. I mean, how big is the cake that that thing was born from? The size of our table? How do you even make something that gigantic? Is Andre the Giant back in the kitchen crafting baked goods for people his size? Seriously.

All in all, Lager Head’s is a must visit. And revisit. Ted hit a home run with this one, although it didn’t stop us from reminding him about the Gus’s Chalet Incident for the 8 billionth time. But you’ll have that with this group. I definitely see us going back, especially since we took special note of the Saturday prime rib special, which Zach noted is so popular that it usually sells out withing 30-45 minutes of offering (dinner specials on Saturdays begin at 5:00). I see an afternoon of college football capped off with prime rib dinners in our near future. If any of you all beat us to a table – and don’t let us join you as a thank you for the recommendation – we’re going to have words. 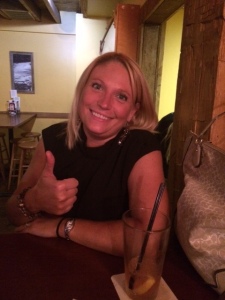 Shane, with the super rare Tebow Stamp of Approval

Drinks:  Would like to try the beers, although they didn’t have anything on the fall seasonal list that I was crazy about. I had seen a few online that I thought I would like to try, but they didn’t have them on tap anymore. Stupid fall.
Food: Delicious. Although vegetarians probably should just keep driving. I mean, I saw salads on the menu – but who goes to a BBQ restaurant for salad? Really.
Service: Outstanding. It’s refreshing to meet a server who has actually sampled most of the menu, instead of just sight judging what they deliver on plates to other customers. And he had a personality to boot. I feel like we discovered a rarity here.
Overall: Yes. I don’t see myself as a “living in the extreme farmland country” kind of girl, but I kind of think if the house next door to this place came on the market, we might have to seriously consider buying it, just to be near this place every day.