Folks, if you ever wonder to yourselves why we keep up this little food blog – I mean, other than to remind ourselves of the various mistakes we’ve made in our picks over the past 4+ years and all of the reasons why we should all truly be dead of heart attacks by this point – let this annual post serve as a reminder of the true reasoning behind our actions.

For the second consecutive year we were honored to be invited to serve as judges for the annual Scrumptious Showdown at Aurora Farms Outlet, a free event that offers a space for various local food trucks to open and sell food to patrons for few hours on a Saturday afternoon. Several awards are given out at the conclusion of the event (that’s where we come in), including a fan favorite voted on by the public (the one category we are not invited to judge). This is the event’s third year, and our second year serving as judges.

The weather for this year’s event was cool and overcast, which was much more conducive to spending a few hours standing on blacktop stuffing ourselves silly than last year’s blazing hot sun and high 80 degree temperatures. I think we’re still trying to blame last year’s water intake for our stuffed-as-a-sausage feeling by the end of the day – even though in reality we know it was really our inexperience with the “it’s a marathon, not a sprint” philosophy that should accompany any event asking you to sample more than 20 foods in one short time span.

I know, it sounds great until the first time you do it. Trust me on this one.

Once again we were separated into two judging groups, with Shane, Ted and I serving as one team. Because we were return judges and hadn’t had the opportunity to eat our way through the “meat” category last year, the event organizers this year gave us that one to start with. We had six entries to judge in that group (while the other group of three judges worked their way through all of the “non-meat” sandwiches). Then the six of us judges combined forces to judge wraps (four entries) and desserts (four entries).

Just in case you don’t feel like using your math skills, that equals 14 samples in the course of about 90 minutes.

Now, if you’re like we were last year, you’re probably foolishly thinking that doesn’t sound like much. Don’t let the term “samples” throw you off. Several of these places are known to give out entire sandwiches, thus leaving it up to us to use the word “sample” as a verb of our own accord.

Can we just talk for a minute about how food you have to eat standing up could maybe be a little less messy?

Let’s just say we definitely learned last year to take the organizers up on their generous offering of to-go boxes.

So in this year’s meat category we tried a BBQ chicken sandwich from Jackpot Chicken, a “Judas beef” sandwich from Smokin’ Rock ‘n’ Roll, a sloppy joe from Hatfield’s, all-American burgers from Robesto’s, and a hot honey pepperoni pizza from DiLauro’s Pizzeria.

Our favorite – and winner of the category – was the Judas Beef. It was very tasty, the meat was smoked just to perfection and pretty much melted in your mouth.

Although we have to give props to Robesto’s for the presentation involved with their burgers. Mini root beer floats? Please. 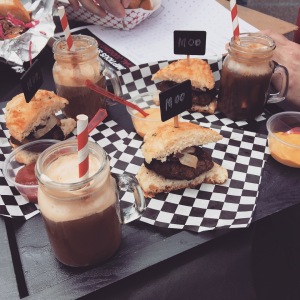 And special mention also goes out to DiLauro’s, for the amazingness that was their wood fired oven in a trailer. Let me say that again, in case you missed it: a full fledged wood fired pizza oven in the confines of trailer that gets hitched to the back of a truck. The entire group of judges made a pilgrimage to their truck to learn more about this engineering marvel that cooks a personal sized pizza in 90 seconds at 1000 degrees. Apparently it takes three hours to heat up, and then 4-5 DAYS to cool down. That’s right, while you’re at work for an entire week, this trailer is just literally chilling out, waiting to get back to normal temperature. But it’s fully insulated, so after the event they could just close up the sides and drive off. Like, oh here, let me just close up my giant oven and take it back to grandma’s house to park. Cool. 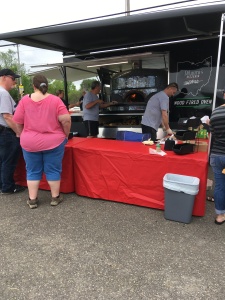 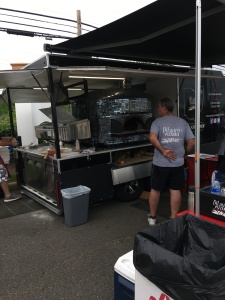 I mean, come on. It’s a giant oven on wheels. How is that not amazing?

In the wraps category, we sampled a chorizo meatloaf wrap from Wrap It Up, chorizo balls with goat cheese from The Funky Truckeria and a gyro from Gyro George.

While I could appreciate the goal of putting together something different with the meatloaf wrap, honestly there was just way too much going on in that one. Tater tots, corn, sausage = overload. Like, hey, let’s put an entire meal into one flour tortilla and save ourselves the steps of having to actually take out a fork and eat it separately. Ted liked it, but probably more so because his other options were a basic gyro (that Shane was a bit salty this year skimped out on the entire meal of fries and baklava) and something filled with cheese.

Newsflash: the cheese item won. Because the rest of the group can appreciate a tasty cheese-filled item wrapped up and deep fried. Sorry, Ted.

On to dessert, where we were given fried naan from Chopati (who had already won over the non-meat group with their Indian sampling earlier), banana pudding from Hatfield’s, chocolate covered strawberry frozen yogurt from The Little Penguin, and strawberry custard from Stoddard’s.

Side note: can we only judge this category next year? Or at least do it first? Because it’s a little unfair to give us things like ice cream that are impossible to box up and save for later AFTER we’re already full from sampling the rest of the categories. Just sayin.

The Little Penguin truck was definitely the most original of the bunch, since it was essentially a mobilized soft serve frozen yogurt shop. Instead of paying by weight you just pay by container size, then step up to the side of the truck and fill the container yourself from the soft serve taps, then add a variety of toppings.

Where was this place when Ted and Shane had the famous 8 lb sundaes? Because it seems this route might’ve saved us some money.

The group was divided on the winner of the dessert category. It really came down to a toss up in the first two desserts (the naan and the banana pudding), since they were both delicious. Commence internal struggle. I think my pen hovered over the scorecard for what seemed like eternity as I tried to decide which to score higher.

By vote of whole group the naan took it. 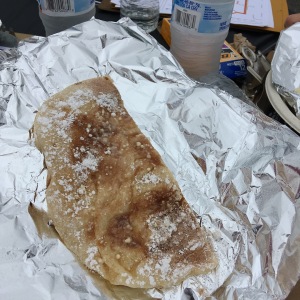 Fried dough will always be a winner in my book

But we will surely see you in our dreams, banana pudding. Until we meet again.

I felt slightly less upset about the great banana pudding upset when Hatfield’s took home the fan favorite award, though. At least they got some recognition for their deliciousness.

So another fun year under our belts, and as always we are grateful to the presenters of the event for inviting us back and trusting our love of food as the basis of prestigious awards. Be sure to mark your calendars for Saturday, June 1, 2019, to come check out the fourth annual Scrumptious Showdown at Aurora Farms Outlets along with us. And definitely say hello if you see us there.

Do we look stuffed? Because we are.

In the meantime, if you see us out and about with giant tables of food in front of us, let;s just all agree that we’ll be considering it “training.”  Stop laughing.