So full disclosure, we’ve all technically been here before, but only for drinks, and not food. On a night a few summers back we returned to a previous WTGW spot, The Ignorant Owl, to check out a band … which was so awful that it literally drove us across the street in search of better times elsewhere.

We ended up on the patio at Nathan’s, enjoying several cocktails and a much better band. So essentially we credit Nathan’s for turning that evening around for us.

Well, and the ensuing 3AM Taco Bell run, which involved Ted knocking on the window of the drive thru as we pulled up after placing our order and emphatically declaring that we were “gonna need some orders of cinnamon twists.”

But that’s a story for another time.

Back to this week’s adventure (spoiler alert, it did not end at Taco Bell, or at 3AM for that matter). We tried to once again visit the patio area of Nathan’s but as we walked out to that area we looked around to discover that there were only about a handful of very small tables that maybe would’ve fit about 1/4 of our usual food order. So that was disappointing.

I mean, I guess we could’ve all four just sat by ourselves and yelled from table to table. But that would’ve probably gotten annoying to the other patrons at the bar area out there, and we kind of didn’t feel like getting beat up that evening.

And we didn’t see menus anywhere, or anyone else eating on the patio … so by our secret decoder ring settings that usually implies that they don’t serve food in that part of the establishment.

So back inside we went. We grabbed a table along the far wall, and studied the helpful calendar of specials.

Hey look, it’s $4 burger night! And you know this group typically doesn’t turn down a burger. Or wings.

What are we on, like week #427 of mentioning that now?

Plus, trivia. I mean, granted we were down one member of the Moist Towlettes trivia team, but of course we weren’t about to let that stop us.

However, our general lack of knowledge for pretty much anything pertaining to this particular game of trivia did stop us from winning any portion of the game, but that’s neither here nor there.

Uh, duh. I pretty much already gave this one away. Even someone as awful as we were at trivia that evening could guess the answer to that question.

So Nathan’s classifies their burgers into categories: regular, super, mega, etc. Seems someone was a little overly concerned with size when they put this menu together, no?

I have to give props to our server, as she was a giant help in placing our orders. No complacent “everything here is good, can’t go wrong” answers from this one. She basically ordered Cassi’s entire meal for her, and had quick answers to the firing range of questions that were thrown at her during that process: which burger is better, mushroom or Italian? what’s better, fries or onion rings? which fries, steak or regular?

It was like watching an eye doctor go through the “which is better, one or two?” portion of the eye test, but at like 100x the normal speed. And some would argue with greater consequences.

BTW, the answers to those questions were Italian, fries and steak. Which is exactly what Cassi ordered.

I went for the lesser of the server’s choices in Cassi’s scenario, the mushroom Swiss burger. And the side salad, which no one asked about. Because, well, we all know this group doesn’t do vegetables well.

Ted got the mega-sized Big Piggy burger. Which was delivered looking just as unhealthy as it sounds.

But it did come with its own very sharp utensil, so I guess I really should watch what I say about it.

Shane got the regular burger … and also the kielbasa burger. Because, why not? Clearly I’m eating all the vegetables in our family, so he has to take on some of the bad habits to make up for my health, right? 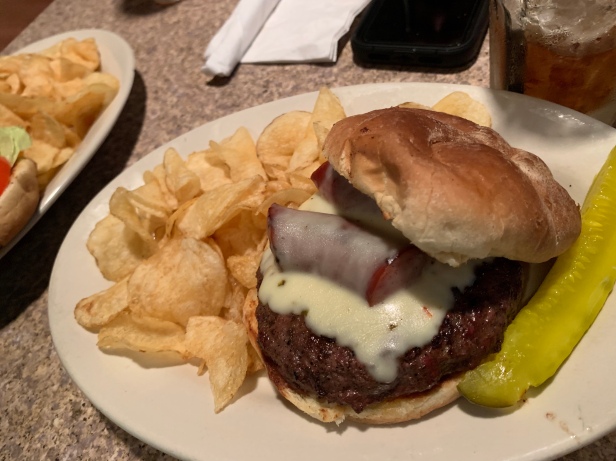 We should point out Shane was shocked to see that both of his sandwiches contained a burger patty. Wait, what now?

Yeah, he thought he was just ordering one burger, and the other would just be kielbasa on a bun. Ok. That might’ve made sense had that sandwich not also been listed under the section called “burgers.” But sure. Guess that extra meat was just bonus.

That what she … oh never mind.

We also started out with a nice big bowl of queso with tortilla chips, just for Ted.

Just kidding. That was for the entire table, minus Ted. He opted for fried pickles.

Let’s just talk for a moment about that sauce for the pickles, shall we? Oh wait, we couldn’t, because it was so spicy that all we could do after first trying it was gulp down about a gallon of water or whatever other beverage might have been sitting in front of us at that moment. Even habanero-eating Ted declared it to be “pretty spicy.”

I mean, don’t get me wrong, it was also good. Just consider this more a word of warning to like not even think about trying it if your glass is almost empty.

Also, maybe don’t order the queso in the same sitting, or else you’ll leave thinking it had zero flavor. I’m sure it did have at least a little, but it was like just putting a bit of squashed, unseasoned cauliflower on a tortilla chip in comparison to the pickle sauce.

Plus we could’ve used about another whole serving of chips with the queso.

Oh, and in our never-ending quest to get hard seltzer at every single bar we visit, we were thrilled to discover they have both White Claw and Truly. But – in true “us” fashion – of course the flavors are held under top secret clearance until the server makes about 15 trips to our table. This evening our server was convinced there was a raspberry back there, until she returned holding mango.

AND THE VERDICT IS:

The burgers were really good. They were cooked to order, and actually stayed pretty close to those specifications. So Shane wasn’t going to die this time.

Always a plus. The Rail will clearly never be forgiven for their murderous attempts. Of like 5 years ago. But whatever.

I ended up not eating the bun because it was a little too toasted for my liking. Meanwhile, on the other side of the opposite train, Cassi thought hers had a mushy bottom.

This was also definitely one of the cheaper nights out for us in a while.

Cassi’s bill for herself was only $14. She spent more on alcohol ($4 each for each White Claw?!) than her $5 burger and $1 upgrade to fries.

Our bill was $39, which breaks down to two rum and cokes, two white claw, three burgers, and one app. 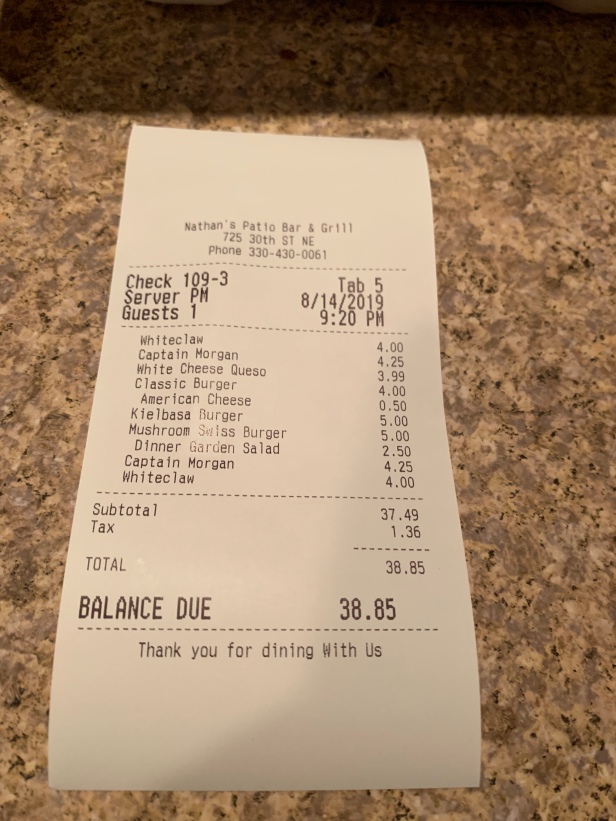 The service was far better than I think we expected to see when we walked into the place. Our server was always nearby and super friendly, greeted us promptly, and gave helpful recommendations.

Oh how our standards have fallen over the years, right? Like basically just pay attention to us and be friendly and we’ll love you forever. We’re like a group of stray puppies.

Which is what I’m sure you’d rather look at as opposed to the usual pictures of our group at the end of our posts … and since we forgot to take our pictures this week anyway, here you go. 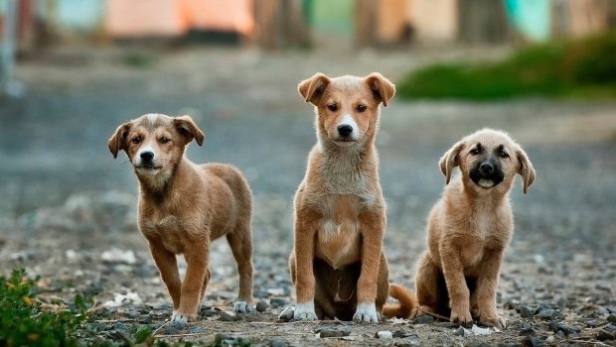 Picked by: Ted
Next pick: Jason’s back in rotation

Occasionally the weather gods actually smile on us for a #wheretogowednesday and we get to enjoy one of the best #patios in #cuyahogafalls ☀️
Tonight we learned the difference between a side and a basket of #fries, that even though the namesake #burger isn’t on the menu anymore that doesn’t necessarily mean it’s not still available, and that Hot Garlic #wings lean more toward hot or more toward garlic depending on who is working in the kitchen at the moment 🤷‍♀️😵‍💫
Welcome to another failed patio Wednesday, this time due to rain. Glad to see that apparently our vendetta with Mother Nature has survived the pandemic 🙃
You guys. We’ve emerged from the takeout bubble! 🤗 Even though our attempt to sit on a patio equated to pretty much dining on the surface of the sun, Shane and I still enjoyed a delicious meal of boneless wings, a caprese chicken sandwich with side salad, and *of course* fried mac’n’cheese bites 😋 And draft beer! How we’ve missed you. 🥰
It’s been an usually busy couple of weeks around here, and honestly we skipped our Wednesday night take out this week due to a few too many dine outs over the weekend … but we couldn’t not mention the meal that included some AMAZING take out from the newly opened @whollyfrijoles in @cuyahogafallsoh 😍 I mean, if you’re looking for some totally loaded nachos, a (somewhat) healthier but still completely filling bowl option, or a burrito literally the size of your head - you definitely need to make a visit. Our one complaint is that the size of the sides of salsa don’t really match the size of the meals - but because it was so delicious we got over that pretty quickly 🤷‍♀️
Happy Cinco de Mayo! Of course we celebrated the holiday with … fried appetizers and sandwiches! I mean, would you expect anything less? 🤷‍♀️🤣