In our next edition of let’s soak up as much of summer as we can before we begin the season in which Mother Nature unleashes her fury of five feet of snow in one hour, we visit The Ramp, a new restaurant on the water in Portage Lakes.

I believe I read somewhere that the marina owners decided to build a new restaurant on their property because they heard people saying there weren’t enough restaurants on that side of the lakes.

But I could also be totally making that up, so don’t quote me on that. I’m blonde. Strange ideas take up residence inside my head sometimes. 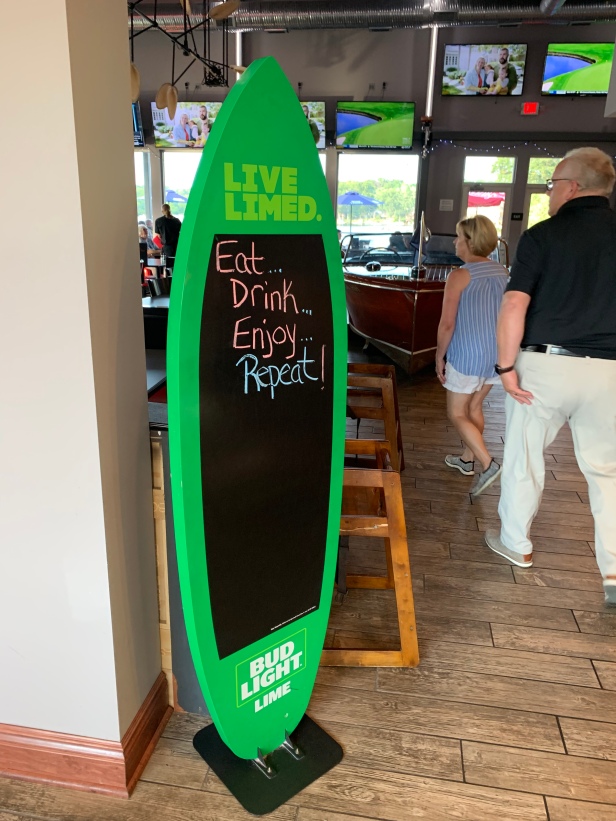 The place was surprisingly not busy considering the location, great patio and fantastic weather.  

I mean, come on. In northeast Ohio, this is about as good as it gets.

I’d also heard from others in the area that conversely there’s a wait list about a mile long to get a table on the weekends, so I guess maybe we are a little bit smart on this whole Wednesday planning deal after all.

In the great Summer Quest for White Claw 2019, this place is in the “yes” category. Score.

We all took one look at the menu and knew Ted was going to order the lamb lollipops for appetizers. I mean, not that he’s predictable or anything, but serve up some sort of meat on a stick and it will definitely makes it’s way to his plate. 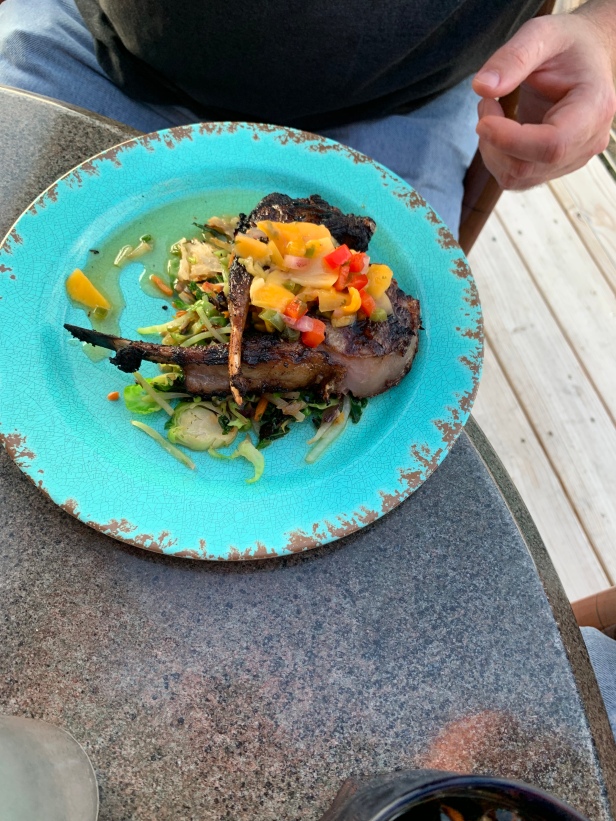 He said they were perfect. And that the slaw served with them was spicy AND sweet.

Oh, Gus’ Chalet, you live on in our hearts.

Shane and I got the fried pickles.

They were good. The breading was rather heavy, but in a good way. If you’ve read this blog enough you understand how that makes sense.

Word of warning: the sauce that accompanied the pickles is super spicy. Again, in a good way, but just be advised not to let your drink run dry before taking a bite. It was like eat one pickle with sauce and drink half a beer to make up for it.

Cassi and Jason got the Brussels sprouts. 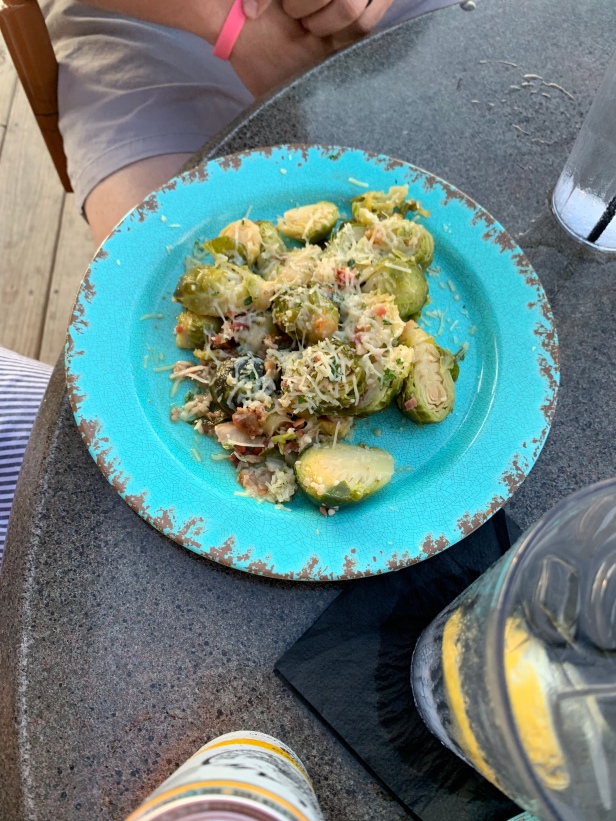 They weren’t the greatest.

On the dinner side of things, I got the beer battered cod with baked potato and salad.

Shane got the Reuben with onion rings.

Cassi got the smothered chicken with side salad and baked potato. 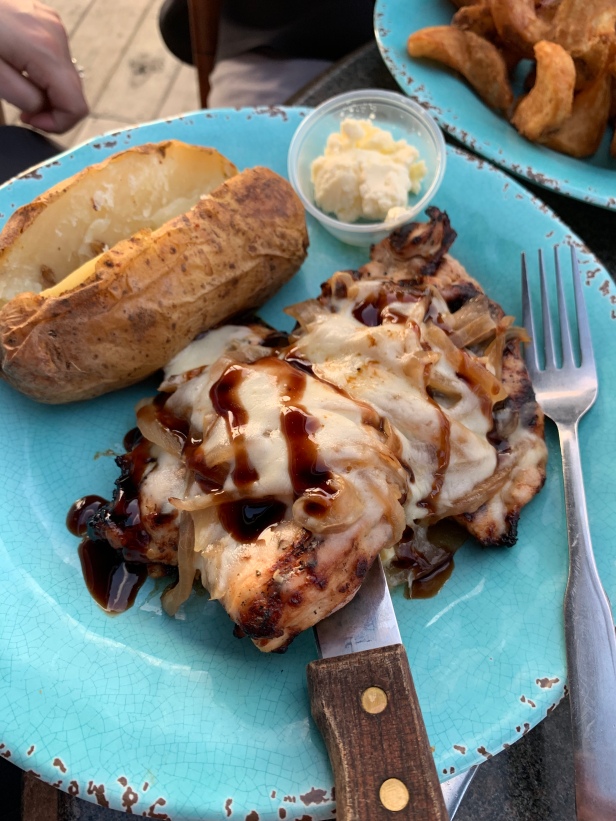 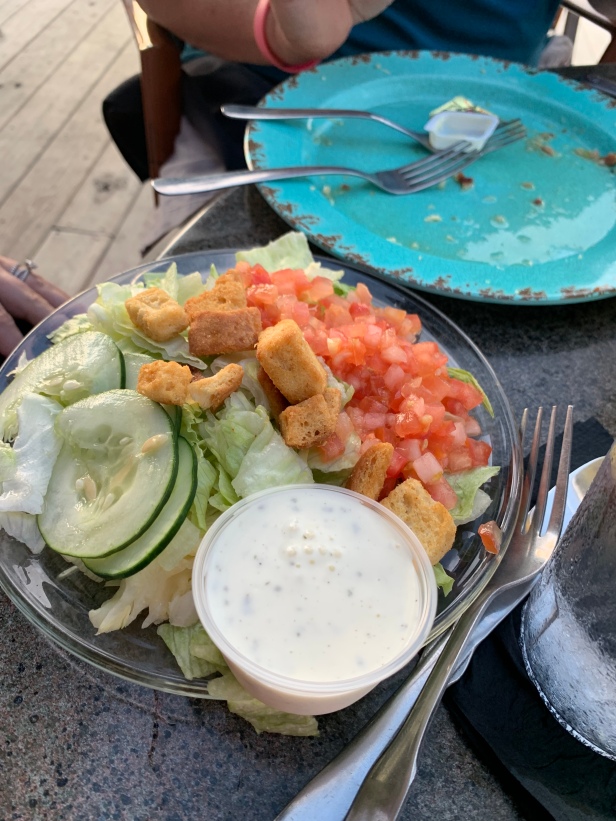 Jason got the Reuben with the sidewinder fries.

Ted got the ahi tuna wrap, also with sidewinder fries.

Overall the consensus was that everything was pretty good. The special sidewinder fries were probably the biggest hit of the meal, everyone who tried them gave those a huge thumbs up. It’s hard to describe what makes them so much better than regular fries – I mean, other than the funky shape and all – but I guess you’ll just have to just trust our well traveled taste buds on this one.

Shane said the Panko breading on the onion rings was exceptionally good. And my cod was very tasty also.

The only one who wasn’t quite as happy with his meal was Ted, but basically that was because the wrap just wasn’t as good as his meat-on-a-stick appetizer. Like he should’ve gotten the app as his actual meal, and ordered something else as the app.

And Cassi might’ve enjoyed her baked potato more had she gotten the extra butter she asked the server for about four times.

So, you know, there’s that.

Wait … please tell me someone out there reading this noticed that no one in our group ordered burgers OR wings?!?!? And yes, they were on the menu.

We’re slipping. Might have to go back to the Springfield Tavern just to redeem ourselves.

Overall The Ramp isn’t a bad place. You can definitely tell that it hasn’t been open very long and that they’re still working out some of the kinks … you know, like taking an entire meal to bring extra butter or boxes for leftovers, even though there’s only about five other tables filled in the entire place … but it seems like it has great potential. I mean, the location alone is amazing. Just needs to make a few adjustments and it could really be great.

Like, for one: entertainment. So they have all those TVs on the patio, how about turning them on? Or hitting up a band or even some Pandora station for background music? Did someone misplace ALL of the remotes?

I mean I get that you don’t want to re-create the party atmosphere or reputation that some of the places on the Lakes have. But when the alternative is letting your patrons be entertained by some kids across the lake doing the poor mans water park and jumping in the water from a rope swing whilst making a ton of noise, or a great blue heron stalking its dinner in the water from the boat docks … well let’s just say that even the Golf Channel begins to look appealing given those alternatives.

There’s a lot of ground between wet t-shirt contest and real live nature channel, and finding the middle certainly shouldn’t be such an impossible concept.

I hear that the weekends find the place full, but on a Wednesday night at dinner time it was not even close to being standing room only. In fact the only standing was done by the staff, who quite possible outnumbered the patrons. At least in the dining room anyway.

Which, again, offers no explanation for the great butter debacle. But I digress.

Plus they have White Claw for $3.75, which all in itself is a great marketing asset considering the limbs we’ve lost paying for it at other local establishments.

I have to think we’d give it another try. And we’re definitely adding it to the “amazing patio” list. So we can be prepared on, you know, the possible four times a year that nice weather and Wednesday actually collide. 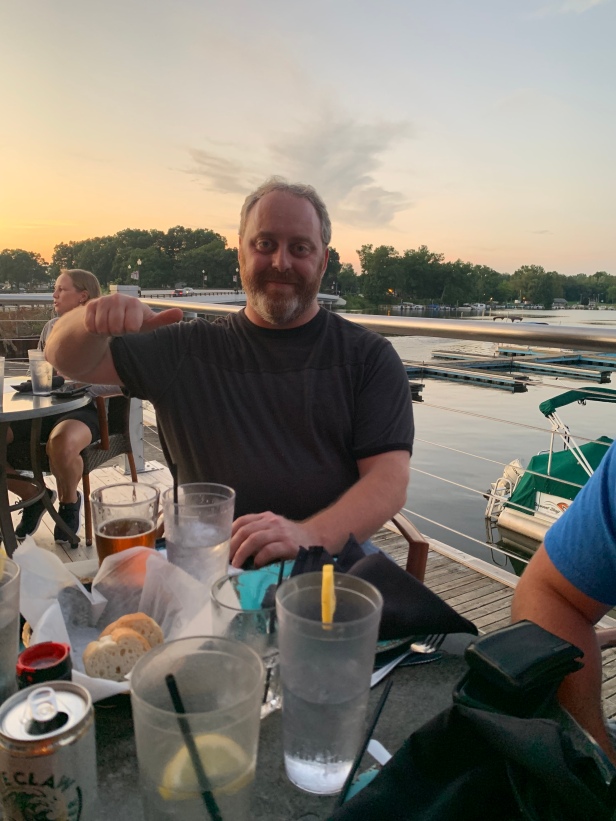 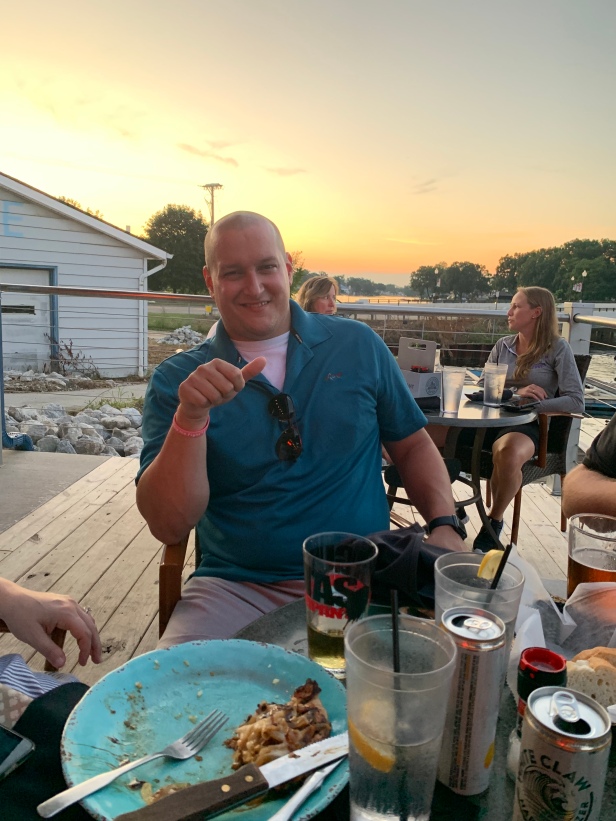