Oh hey, Basement, it’s been a hot minute. Or, well, three years and four and a half years, I guess – but who’s counting.

Allowing Shane to pick the new Cuyahoga Falls location of The Basement is really kind of a technicality, because not only have we a) been to the restaurant twice already, but b) he was the one to pick it the last time we visited.

I have to think that Ted might want to jump in to give Shane a little bit of hell for this, no?

But seeing as that last visit pretty much, in Shane’s (perhaps somewhat dramatic) words, tried to kill him, I guess if he wants to be the one to take his chances and return to the scene of the near poisoning, well, who are we to stop him? Especially when we already know we like the food there and have kind of just been avoiding it as a favor to him?

So here we are again, as mentioned at the new location that has recently opened in Cuyahoga Falls. Either the opening hasn’t really been publicized all that much yet, or several others in the area have been victimized by wings and pizza in the same way Shane was after our last visit, because it wasn’t very busy inside when we arrived.

The menu is still just a few words short of War and Peace, so be sure to plan a few extra minutes in the battle of your hunger vs. your entire party’s ability to choose an entrée in a timely manner when visiting this place. Likewise, maybe don’t visit with people you haven’t seen for a while and need time to catch up with before even opening the menu. Or anyone prone to indecisiveness.

At some point you just have to pretty much commit to one particular page and then point to something before you have a chance to change your mind again.

Our group eventually unanimously agreed with taking few moments of silence just so we could all peruse uninterrupted and make a decision in a timely manner before someone bit off a finger out of hunger.

Of course even though we already made our choices, we still had to do the weekly server inquisition to see if what we chose lined up with what she recommended. She voted for the wings, hands down, and also the philly sandwiches. Which is apparently what The Basement is known for? How did I miss that somewhere in the last two visits?

Oh, wait, I think I know how … funnel cake fries. Those bastards always stole the show, even when we didn’t actually order them because we were too full by the end of the meal to do so.

Which is why Ted learned from his mistakes and ordered them right away as an appetizer.

You’ll be happy to know that they still do not disappoint.

Unlike the pizza rolls, which claim to be a “party in your mouth.” I mean, they were good and all, but that seems to be a bit of false advertising.

Samsies on the cheesy tots that Jason and Cassi got as an appetizer, which were more like non-cheese tots. Or Ted-stye Tots, as I guess they could more aptly be called. 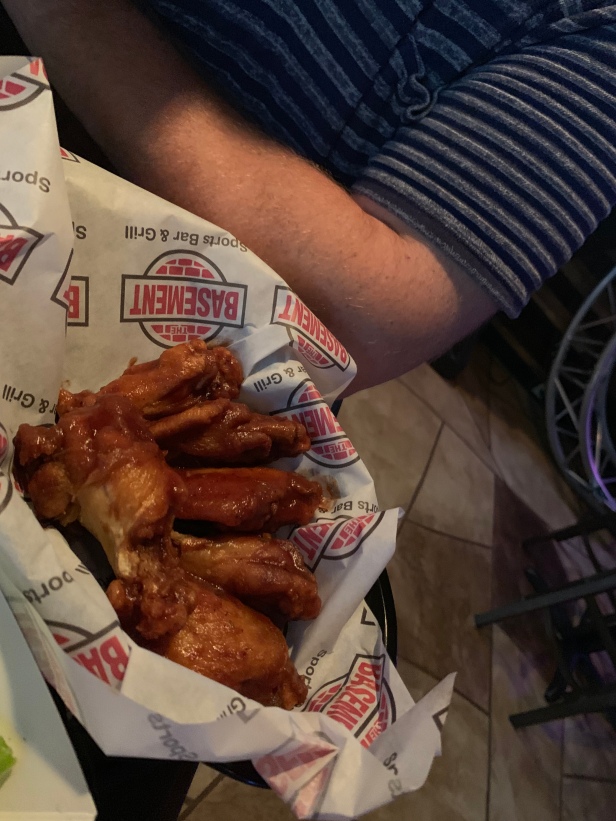 I followed the server’s recommendation and got 12 chili lime wings and a side salad.

Of course I also ordered a black cherry white claw (which I thought they had thanks to a super helpful TV screen showing all of the drink options) … but then was treated to the dreaded return of the server telling me that they were all out. So mango it was then. At least they had another flavor choice, so score.

Shane got six pepper parm wings – which seems like a new sauce combination, no? Considering anything with pepper or parm are the two most likely for Shane to order, it’s almost like they discovered a way to give him a little peace offering for his near death experience a few years back.

He also got a basket of two sliders, I guess just in case the wings started to go south quickly? 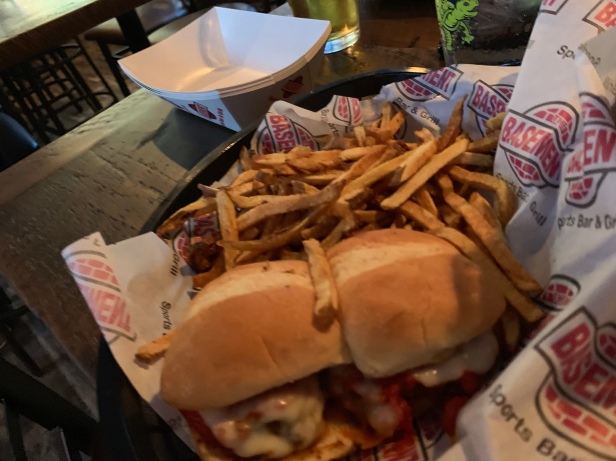 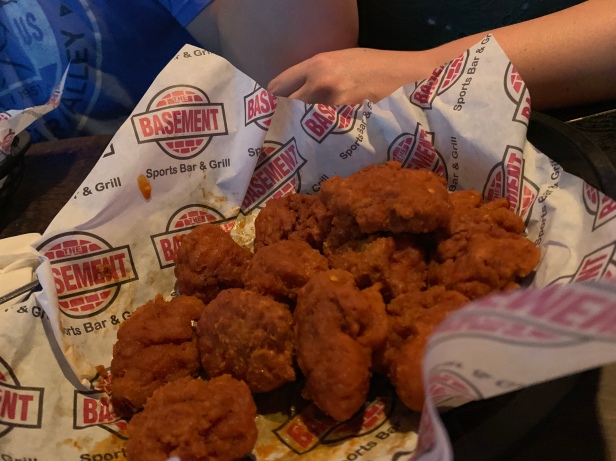 Jason got nine of the Kaluger wings – which apparently is the somewhat non-appetite-inducing name of their special housemade sauce. I mean, I’m sure it’s named after someone and so I shouldn’t make fun of it, but then again when has that ever stopped us? The server described it for us but clearly it wasn’t very memorable, since I can’t seem to remember now what she said it tasted like. 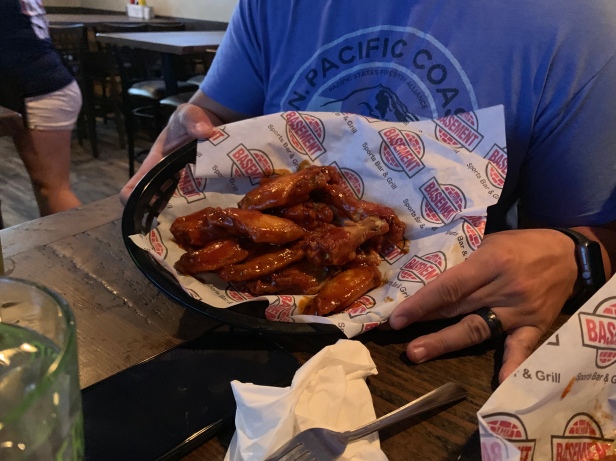 AND THE VERDICT IS

After we put our orders in we were warned that the kitchen was “totally slammed” so it could be up to 45 minutes to get our food. Hmm. OK. I mean, on one hand we appreciate the warning – but then again after taking a look around and noticing about 10 other full tables in the place with us that was slightly concerning that they could be that backed up. Are they taking a cue from Wadsworth Tavern and cooking everything in two Easy Bake Ovens in the back? Seems logical.

They did get all of the apps out pretty quickly though, so that was a plus.

But when the actual meals finally started to funnel out we quickly realized that Ted’s sandwich was not among them, and quite frankly nowhere to be found. So we waited … and waited … and eventually was able to flag down the server to go check in the back to see what was up. Turns out there was a miscommunication – which was never really clarified, but we’re assuming is code for “the order was never put in.”

However, a manager did eventually appear to say they would comp his meal for him, so that was a nice gesture.

And that comp was definitely appreciated, especially when the bills came and it was discovered that Ted spent almost $20 on two beers.

Yeah, Ted’s Guinness and the first round of craft IPSs that Ted and Jason got were $8.75 each.

Yikes. Clearly they need to revise that TV screen technology to also include pricing.

And remember that White Claw I ordered? Yeah, it was $4.00. Meanwhile Shane’s tall mixed drink was only $4.25. Clearly I chose poorly. Or someone is just using a pick-the-price-out-of-thin-air scale behind the bar.

Overall, it seems like they’ve got a few kinks to work out since opening – and let’s hope they do so before any major sporting events like Browns football Sundays or perhaps Indians postseason start really filling the place up. The food was still just as good as we remember it from the other locations, but service and pricing could stand to be upgraded in order to warrant another visit in our future.

This is what we get when we ask for places we like to open up in our neighborhood, I guess. *sigh*

Picked by: Shane
Next pick: Cassi … after a brief hiatus for vacation 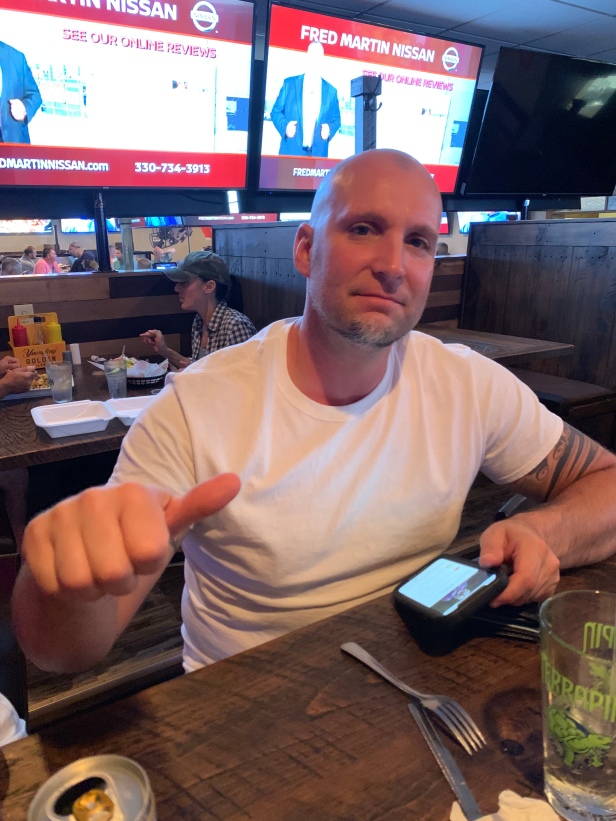 Because nothing says it’s almost Christmas like going out for Mexican food, right? 🎄🌮
‘Twas the night before Thanksgiving … and we started out at the Bailey Rd Tavern, because $3 burgers are just crazy to pass up.
We are branching out to the perimeters of our “30-ish minutes drive” radius this week to explore the wonders of Brunswick - because it’s been 10 years we’ve been at this now, y’all, and let’s face it, we’ve been to A LOT of places by this point.
Burgers half off on a Wednesday? I mean, it’s not like this group *ever* orders those 🙄
Words of wisdom from Casa Nueva in Stow 🌮
Tonight’s adventure was one of patience that paid off.