So we’re down a person this week, with Cassi out on a work trip. Which means it’s revisit time for the rest of the group.

A feat which was slightly more difficult than you would think. We were trying to stay close to home, so once we filed through some of our nearby favs, we opted for the Noisy Oyster. But forgot that Wednesdays are trivia nights, and apparently ALL OF CUYAHOGA FALLS shows up to vie for the 20 tables available on this place.

So, yeah, that didn’t work out.

Special shout out to the non-helpful man sitting outside who told us on our way back to the car that next time we should try arriving before 5:30 if we want to get a table on trivia night. Thanks, mister. I’ll be sure to pass that along to my boss as an excuse as to why I need to leave my job early the next time we want to go there on a Wednesday night.

Back to the drawing board. Our usual revisit go-to, R. Shea’s, looked packed, and even though I’m sure we could get a table at The Getaway, we likely wouldn’t be served our food until about 10pm. Hmm, where else haven’t we been for a while?

Ah, Retz Laconi. It’s been almost three years since our last visit to this little tucked away neighborhood bar and restaurant, so we were well overdue for a revisit.

Of course Shane demanded a storytime presentation of the blog post from the last visit so he knew what to order this time around. I’m glad my phone is the only one that seems to work for these ventures?

But we did learn that Shane chose the eggplant parm in that last visit, partially for the intriguing aspect of the eggplant being rolled in cheese and deep fried.

Because that sounds nothing like anything any of our total health but selves would ever order, right?

And Ted of course bypassed the Italian menu completely and ordered our group staple of a burger (served Ted-stye, minus the cheese) with wings.

This time around, the guys all opted for their own personal pizzas, combined with orders of wings. So clearly Shane learned his lesson from last time when he ordered an entree and wings but then couldn’t eat the wings because he was too full.

We truly are creatures of habit in this group.

Back to 2019, where, as mentioned, we have a theme for tonight of pizza and wings. No burgers this time around. Surprisingly.

Ted got 12 hot wings and a medium meat lovers pizza. 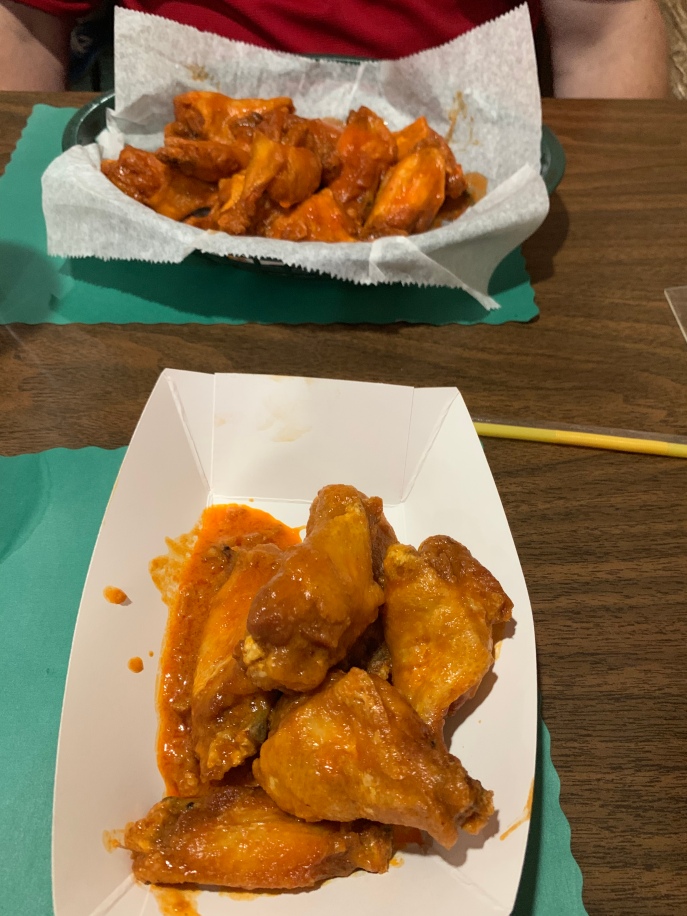 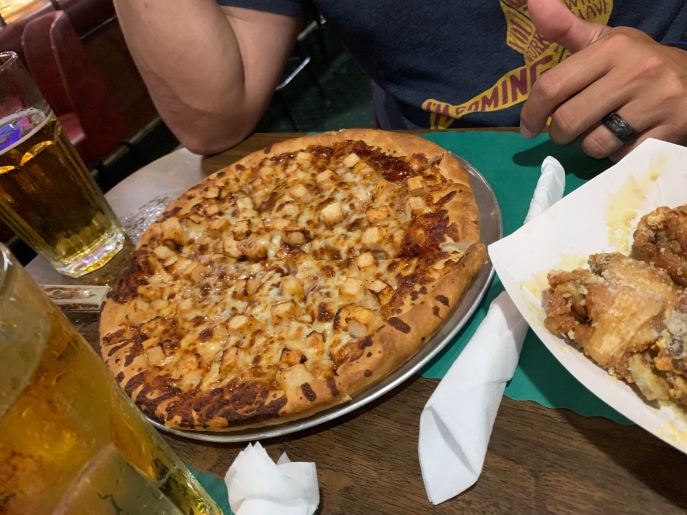 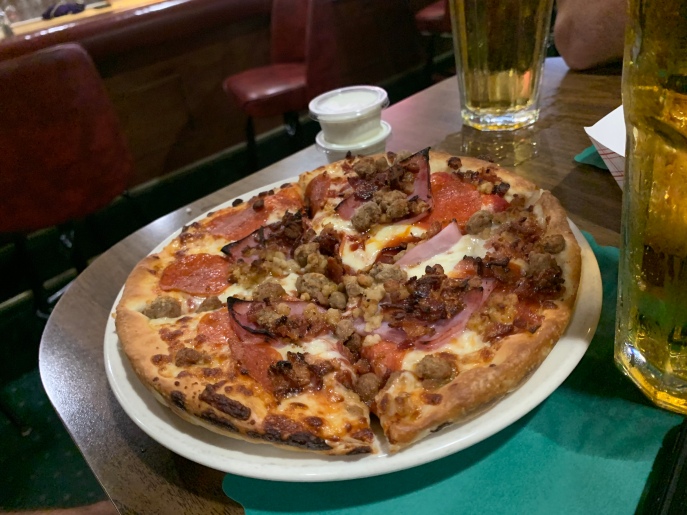 I kept with the wing night theme, but decided on a side salad instead of a full pizza to go along with them. One of these things is not like the other in this group.

And that unlike thing is also something I seemingly forgot to take a photo of, so you’ll just have to use your imagination on my order. Just picture the wings from those photos above, and replace the large circle of carbs, gluten and meat covered in melted cheese with a small bowl of something green covered in non-melted cheese. Done.

The guys gave the pizzas a thumbs up. Although Ted took half of his home – because, well, if you haven’t noticed there was a crapload of food on our table. And he also ordered a medium pizza all for himself.

Shane said he would eat the pizza first next time so he’s not as full by the time he gets to that portion of the meal. So if you’re keeping track here, note that he didn’t say he would order less food, just that he would change the order in which he consumed it so as to make sure he got to try everything.

Also we all know how Shane needs to let his food cool to the temperature of a hardwood floor in winter, so Im also noting that if we have to wait for him to eat his pizza first then maybe we should call ahead and have them prepare it before we arrive so we aren’t still there at midnight waiting for it to cool down.

Mine and Shane’s bill was $46 before tip. Jason’s and Ted’s bills were each around $35 before tip. That damn medium pizza was definitely the kicker.

Also my mixed drinks were the same price as Shane’s beers ($4) … and being that all I tasted was cherry I can only assume that there was definitely more rum than coke involved with those. For once I may have actually won the drink lottery and chosen wisely.

Side note – we’re on hiatus from new picks for most of this month, as every week we seem to have at least one member of the group with a work or vacation conflict. So check back for more revisits, and we’ll see you in October for the next new pick. 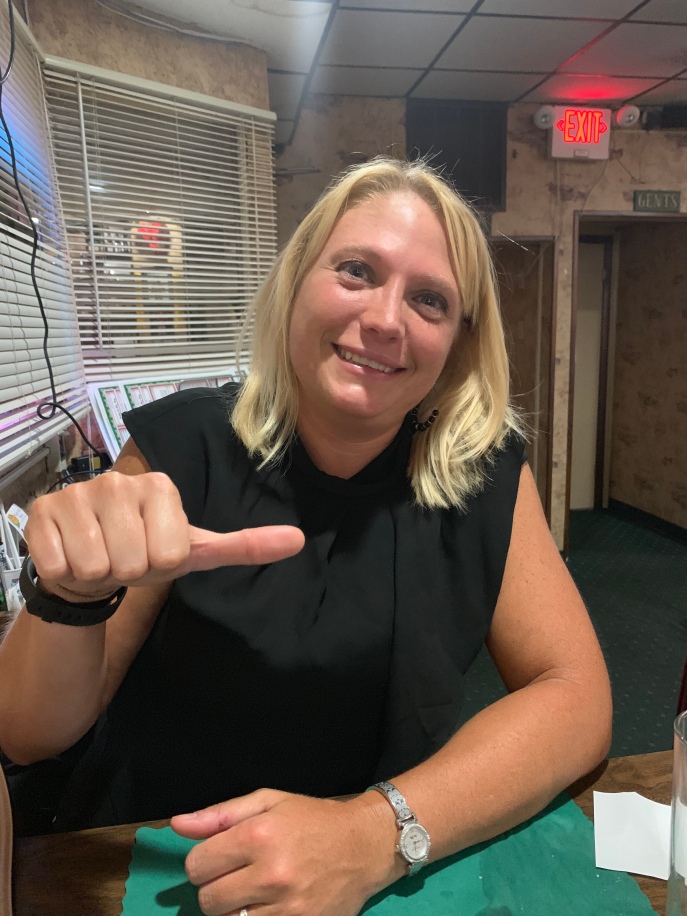 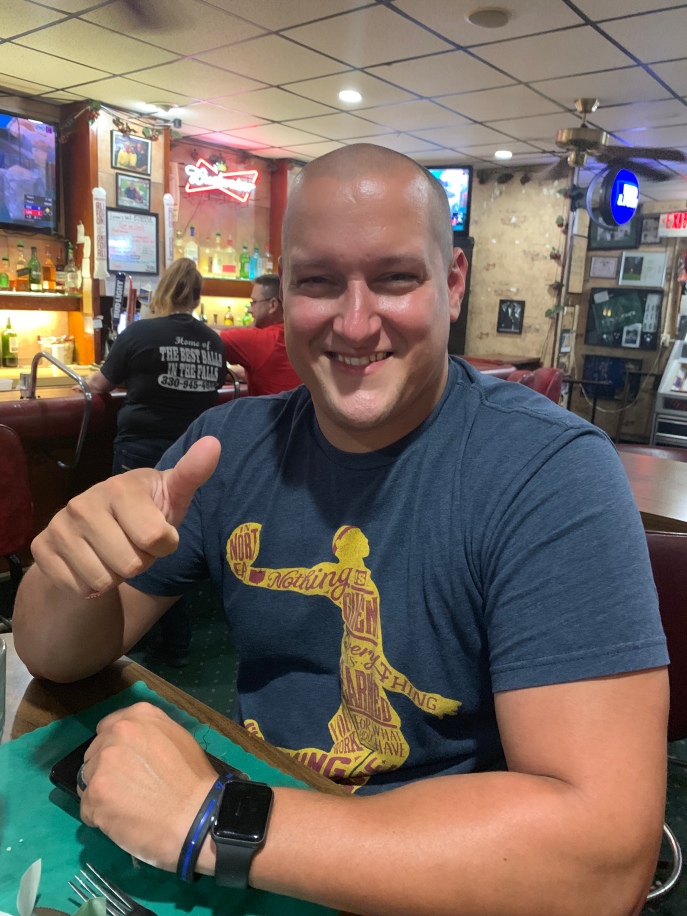