As mentioned in our last post, we’re on a revisit month here at WTGW, while we all take turns rotating out for work and life commitments. Because clearly we’re still not a big enough deal for the rest of our lives to catch up and realize this is what we do on Wednesday nights.

This week we’re missing Ted, who was out of state for a family wedding.

After our difficulty finding a place in Cuyahoga Falls to revisit last week, we thought it best to branch out to nearby Akron for this week. And it’s been more than a hot minute since our last visit to Frank’s Place (five years!) – but of course we remember we liked it because we got free booze and desserts the last time we were here.

Yes, we’re that easy. Have we not all realized this by now?

Our other memory was that we nearly got nailed by sharp objects as we walked in the front door, thanks to dart leauges on an already busy night and some improperly placed dartboards. Which seemed slightly sketch and maybe not the best way to make a good impression on folks as they try to come in and enjoy a beer and some dinner. But whatevs.

Well as much as we’d like an appetizer of a trip to Jamaica, that seemed somewhat unfeasible and a little much to splurge on for a Wednesday night. But thanks for giving it a page in the menu, that was fun to read.

Shane and I opted for the spicy hot pepper balls instead. Because that’s almost the same. 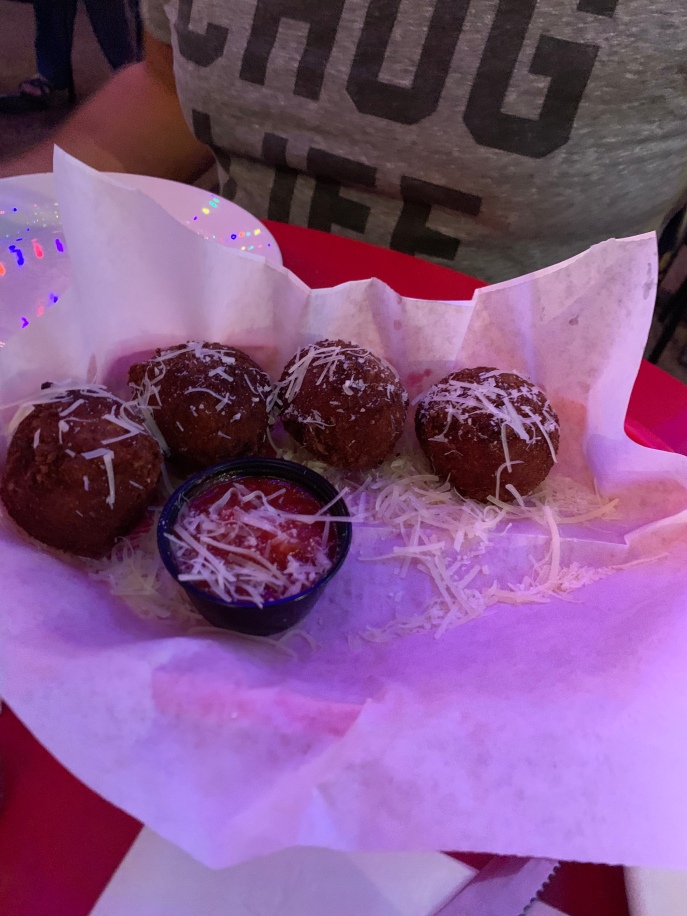 Cassi and Jason got the chips and dip, after a lengthy discussion about not being able to get the special dip when you get the chips as a side – only as an app. Anyone else think this is weird? Like what makes this dip so special that it only comes as part of the app?

Hey Shane got a burger and wings. Anyone shocked? No? Didn’t think so. He got the regular burger with pepper jack cheese.

Cassi got the same, just a different cheese and a side salad instead of that side of fries that seems to be so popular with our group.

I got the wise guy burger with a side salad.

Jason got the cowboy burger with crinkle cut fries.

Also while they did have Black Cherry White Claw, we opted for the Natural Light hard seltzer – because who doesn’t feel classy drinking a form of Natty Light at a place where the evening’s dinner special is salmon? 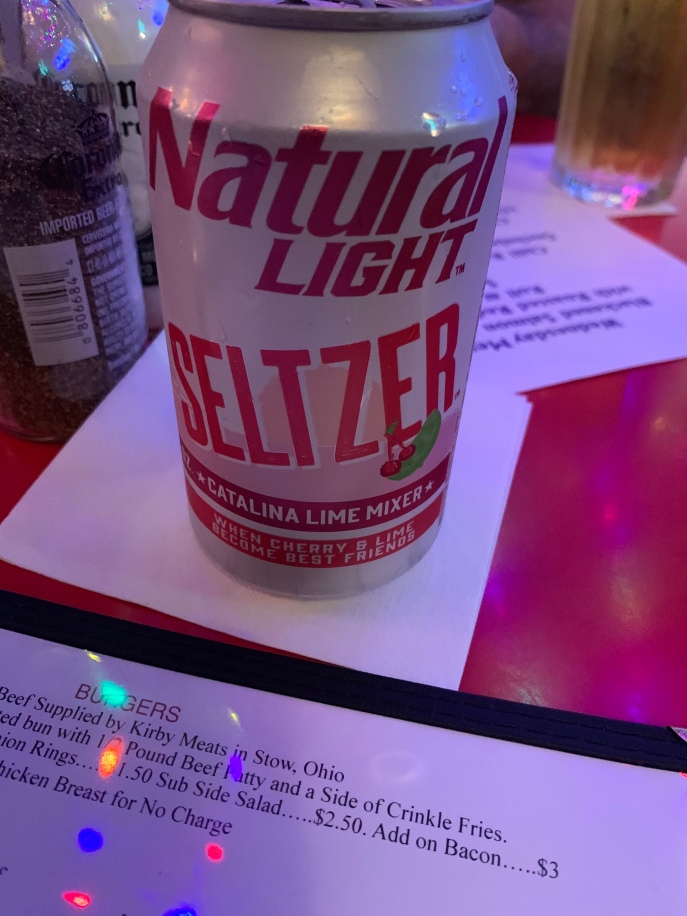 So I ordered my burger cooked medium, and was served one that was very much looking like it was the color of the inside of a grapefruit. Hmm. I’ve seen those color charts on the chain steakhouse menu that basically depict “grilling colors for dummies,” and that doesn’t seem to match up. Might’ve wanted to leave that one on the grill a bit longer there, chief.

That made Shane nervous to even cut into his, which he ordered medium rare. And we all know how he feels about places that serve burgers that seems to have just been killed fresh in the backyard.

See also: why we haven’t been back to The Rail in, well, ever. 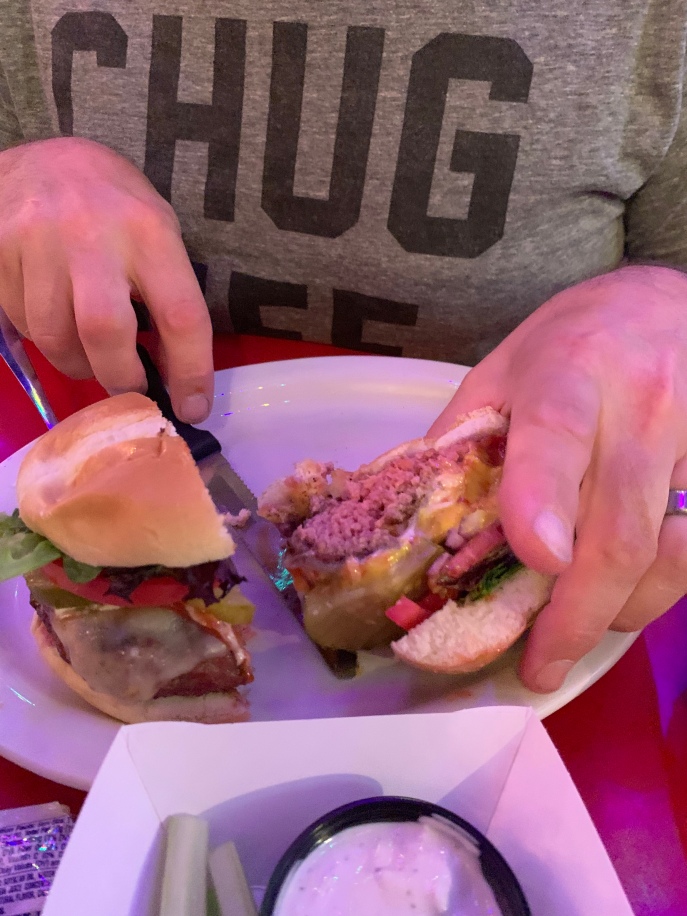 Let’s just say that if you’re reading this then that means that neither of us died from some sort of food-borne undercooked meat disease, and that might be something short of a miracle.

Cassi ordered hers well done, and that seemed to have been the best choice on the non-sketch scale. So the moral of the story here seems to be that you should take into consideration the color you want your burger to be, and order about two levels up on the cooking scale for this place.

Apparently the special you-can-only-get-it-as-part-of-the-appetizer chip dip was the bomb. So let’s just go back to this, because we’re still a bit perplexed about why they can’t make this available as a part of any other order of chips on the menu? I mean, here’s an idea, why not sell it as a side with the chips that you’re already making people upsell to get as a side dish. $2.00 for chips, $2.00 for the dip.

I’m not saying we’re brilliant or anything, but if you try that for a year and then cut us a check for that extra compensation maybe it will make it more obvious just how smart this really is?

The salads were good. Croutons were a hit. And the crinkle cut fries were hot and delicious also.

Plus who doesn’t love getting a receipt with a line item for an $8 order of “balls”?

Overall a good little gem of a place that it’s surprising it took us five whole years to return to. It seems that Wednesdays are no longer dart nights, a change that means not only is it easier to get a table this time around, but your chances of getting impaled by a dart upon entry have greatly decreased as well.

Although if impalement is your thing, you can take your chances that you may have a sharp knife rolled in your silverware setting. Or it may be a butter knife. Who knows? You could make a drinking game out of guessing which one you might uncover.

If you haven’t learned by now, we definitely make our own fun wherever we go, kids. Whether that’s playing with sharp objects or ordering slightly sketch meats.

But we did miss getting free desserts and shots here this time around. That’s something you shouldn’t take away, ever. 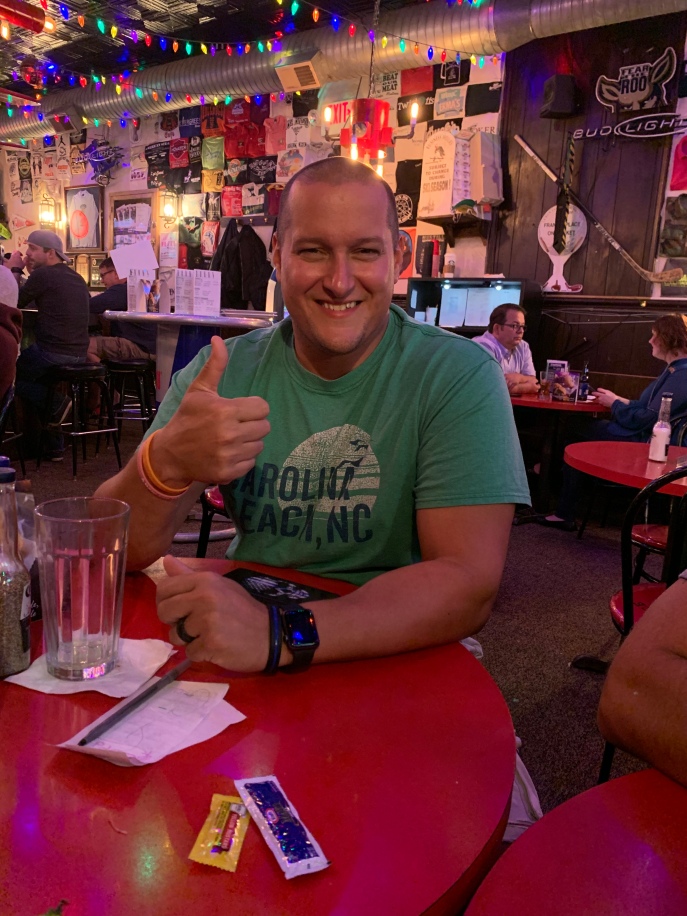 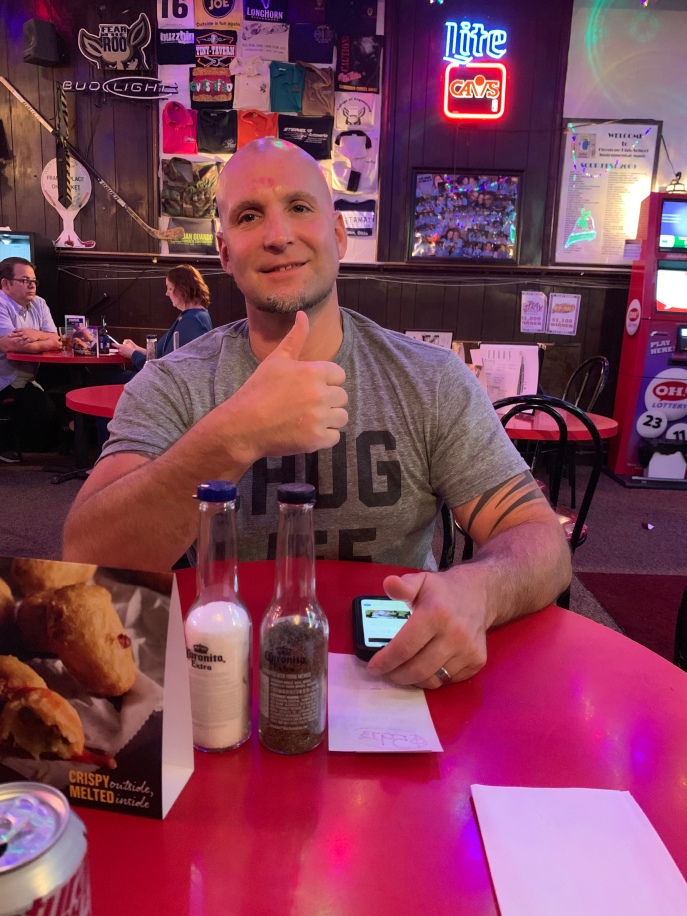