Did you miss us? Because we sure missed you, friends.

Or, well, let’s be honest, we missed going new places with you. Yes, we realize it’s been a hot minute of revisits since our last true pick. It seems like the past month has been a game of tag within our group, as each week brought a new reason for one or the other of us to not be available.

So, since it’s been a good amount of time since we had a real pick, I bet you’re assuming that we have a real good one lined up for our first week back to normal, right?

Well, we all know what happens when we assume.

There’s your set up, folks. Read the rest at your own risk.

On a positive note, I can say that at first glance, Erie St Kitchen showed quite a bit of potential. Cassi had looked up the menu online before picking it (duh, who doesn’t? Oh, well, us, sometimes, I guess – but really I think that’s more the establishment’s fault for not having a website in the first place) and was confident about her findings. And as we were sitting in the booth staring at the printed menus, we agreed. The specialty seems to be a lot of southern style food like jambalaya, plantains, gumbo, po boys and so forth. And when you can get Nashville style hot chicken in Kent, Ohio, you can’t pass that up, can you?

Um. Well. We’ll get back to that one, but let’s just save everyone some time and say that the answer, apparently, is yes, yes you can.

We should’ve realized our misstep when we sat down in the booth at the far corner, and in assessing the lay of the land, realized that we would need to get up and visit the bar for a drink, and the kitchen window for the food. Hmmm. OK. So basically this is just one step above a drive thru, then? Nice. I mean, they do bring the food over to you, you don’t have to get back up and pick it up from the window. But still. That’s like saying when you order fries at McDonald’s from the drive thru and they tell you that they just ran out but are making a fresh batch, and instead of making you come in to claim them you just have to pull over to the side and wait for someone to run them outside to your car. Cool.

Or not. Not cool at all, Erie St Kitchen.

Well, while we’re waiting for our food and not conversing with wait staff at all, let’s look around and try to figure out the vibe, shall we? I mean, we’re in a college town, so obviously we expect to see students around us. OK, check. But then there were also several tables of folks old enough to be our parents. OK. Professors, maybe? Townies? Parents of students in town for that elusive and probably not entirely welcome mid-week surprise visit? It’s a mystery.

Ted went full southern on us, ordering the fried plantains and jambalaya.

All of which arrived in front of him approximately 3.2 seconds after he ordered it. Like I don’t even think Jason and Shane were back from placing our respective orders yet by the time Ted’s arrived at the table. And his plate was almost clean before ours even left the kitchen.

So let this be your takeaway: if you’re hungry, apparently plantains and jambalaya are the salsa and chips of this place. So place that order and have no worries about hitting that hangry phase before your food arrives.

Cassi and Jason ordered what may be one of the strangest items ever to grace an appetizer menu: deviled eggs.

Because nothing screams bar kitchen like some eggs filled with mayo and mustard. I mean, it’s not tarter toast. But. Well. You get where I’m going here.

Cassi got the Nashville chicken dinner with the pimento mac & cheese. She also subbed the cole slaw for a side salad. 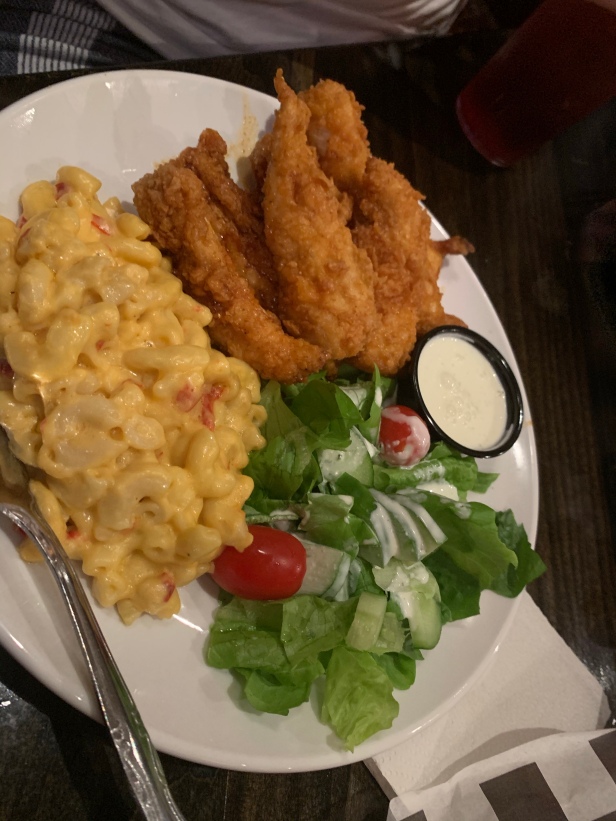 Yes, you read that right – pimento mac & cheese. That alone almost swayed my decision in that favor. But instead I went with the Nashville chicken “snack,” which is apparently a code word for “chicken tenders.” I also opted for a side salad. 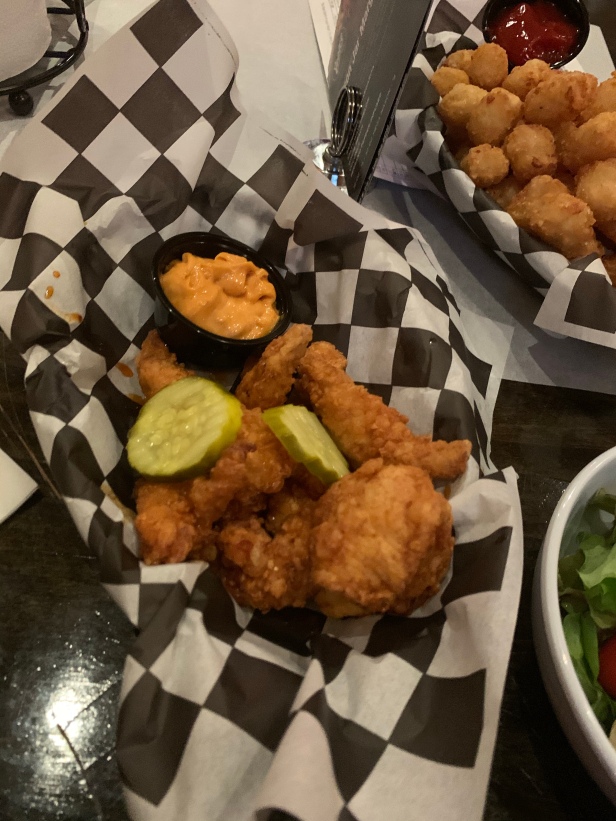 Shane and I started off with a basket of tots.

On the “we love burgers” side of the table, Shane got the bacon blue burger with a side of fries and Jason got the goat cheese burger. 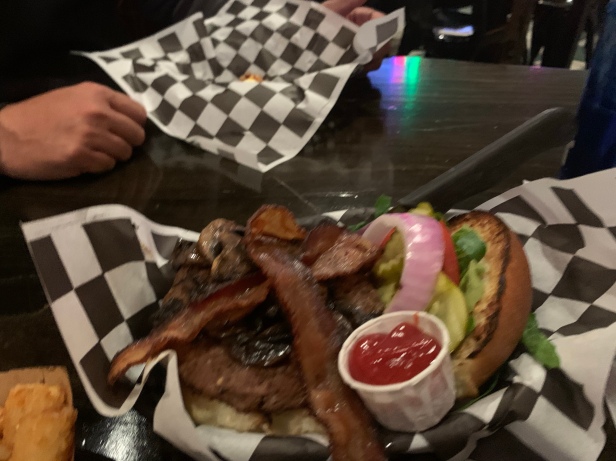 Ted gave a big thumbs up to the plantains, saying that the sauce was a little bit spicy but the plantains themselves were sweet.

He was not as vocal about the jambalaya, calling it just OK.

The deviled eggs got that same verdict.

Shane was not a fan of the burger. He said it had zero flavor at all. He had to douse it in some of the sirachi mayo that came with my chicken tenders just to make it edible.

Although I think I would take no flavor over the flavor I’ll lovingly call “WTF” that was all over my tenders. The chicken was spicy, sure – as Nashville hot chicken should be, duh – but the initial taste was more like a vinegary floury … mess.

Because that’s what you want in a product description, no?

I couldn’t even eat them.

Thank god for the smallest bowl of lettuce ever and a crapton of tater tots, I guess. Dinner of champions.

Cassi’s chicken was much better, which was strange because, well, essentially it was supposed to be pretty much the same thing as what I ordered. Hmmm. We eventually deduced that hers came with sauce on it and mine came with the sauce on the side, so perhaps the five alarm fire hot sauce was just masking the initial taste?

The only salvageable thing for me was the white peach margarita I had, although the amount of sugar in it probably equals about 75 candy bars.

Overall I’m gonna go out on a limb and say we won’t be returning to the Erie St Kitchen. I mean we could basically get the same service if we go get takeout and bring it back to our own kitchen to eat. And at least then there’s also ingredients there to doctor it up when it’s not edible too.

Picked by: Cassi
Next pick: Steph 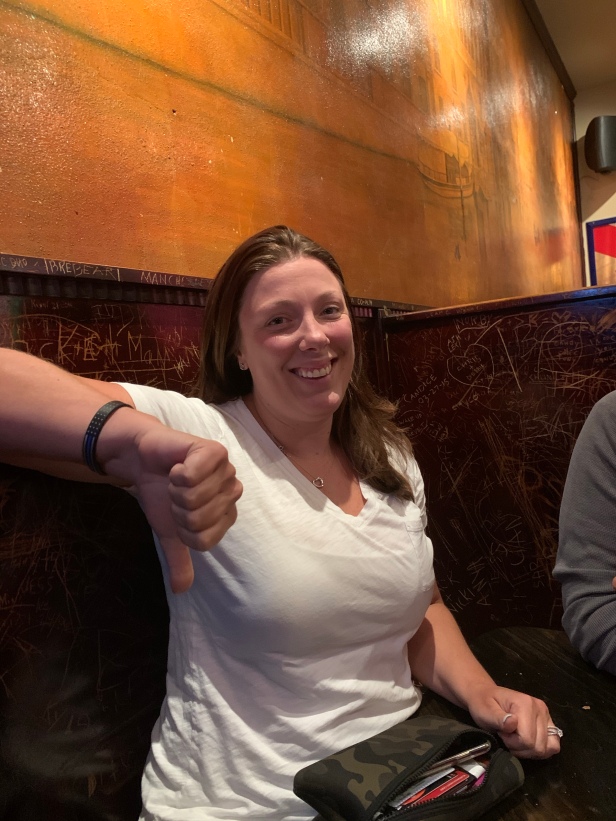 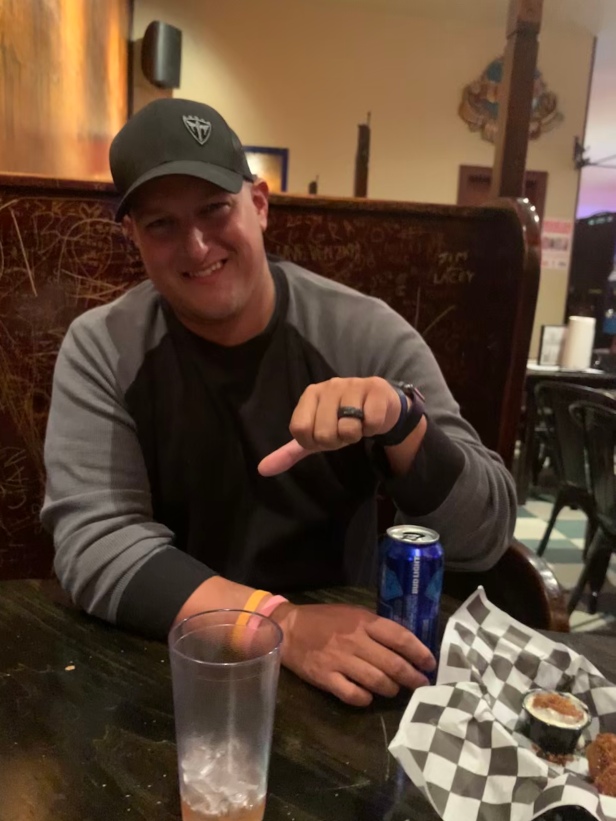 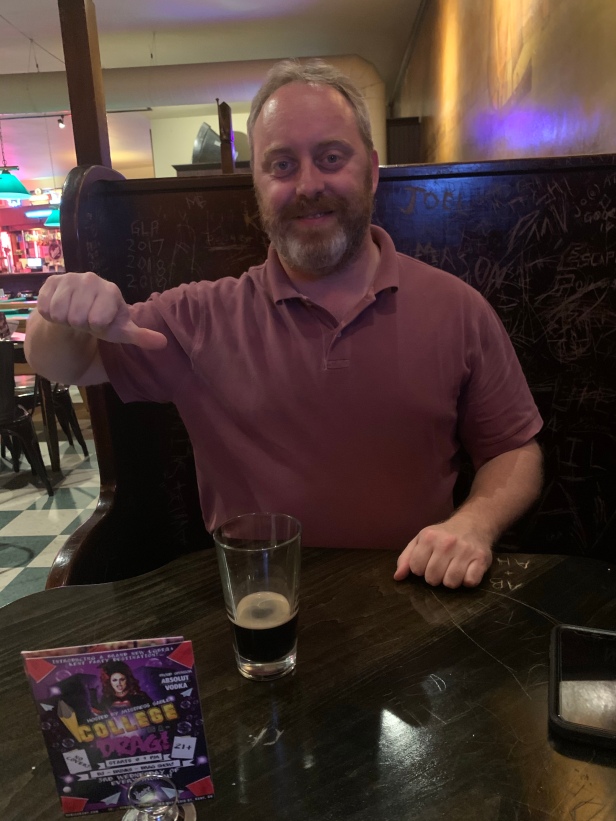 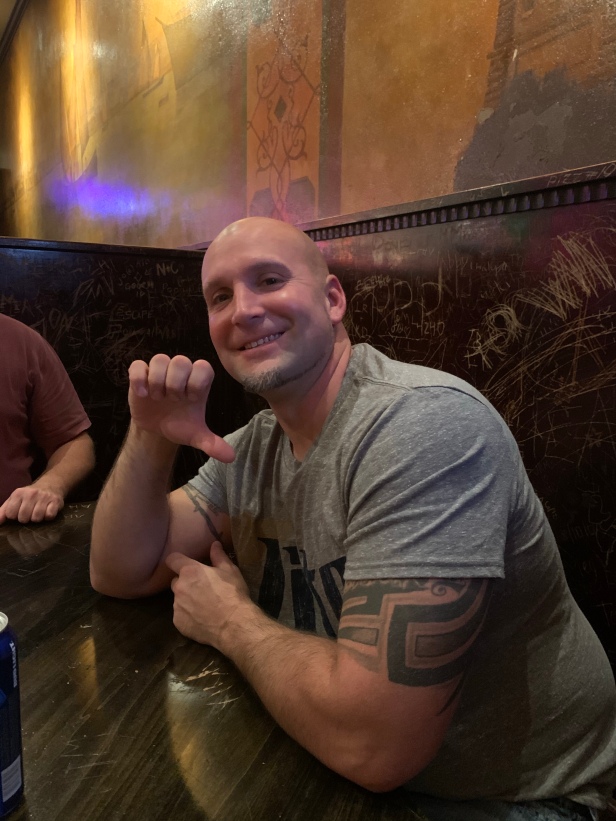