Friends, if you will, indulge us for a moment for a story.

Once upon a time a group of food testing friends came across a bar that had everything they were looking for. There were drinks. There was food. And there was a lot of fun with some new friends, which culminated in a far later night out than folks of their age should likely indulge in, but that’s neither here nor there. 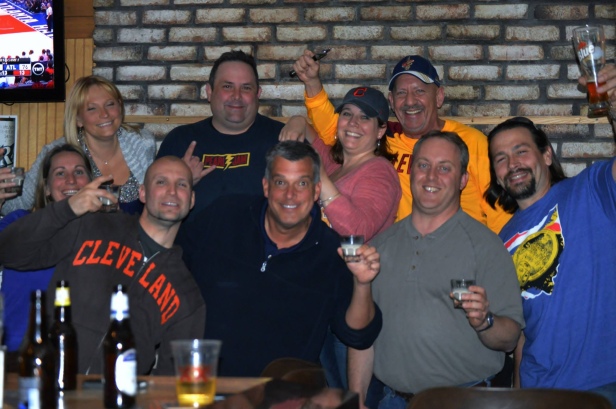 It should also be noted that we only really know about four people in all of those photos.

The name of this magical place was Howie’s. It was situated next to a lake, the likes of which they didn’t see that evening because it was a chilly spring evening, and, well, occasionally this group makes smart choices.

But they vowed to return.

And they did, once or twice, on a few weekends and one particular 4th of a July.

But then the place closed. And they were sad for taking its existence for granted.

But wait! Thanks to the power of social media, it was learned that the owners opened a new place! A pizza pub, in nearby Green, called Deluca’s Pizza Pub. 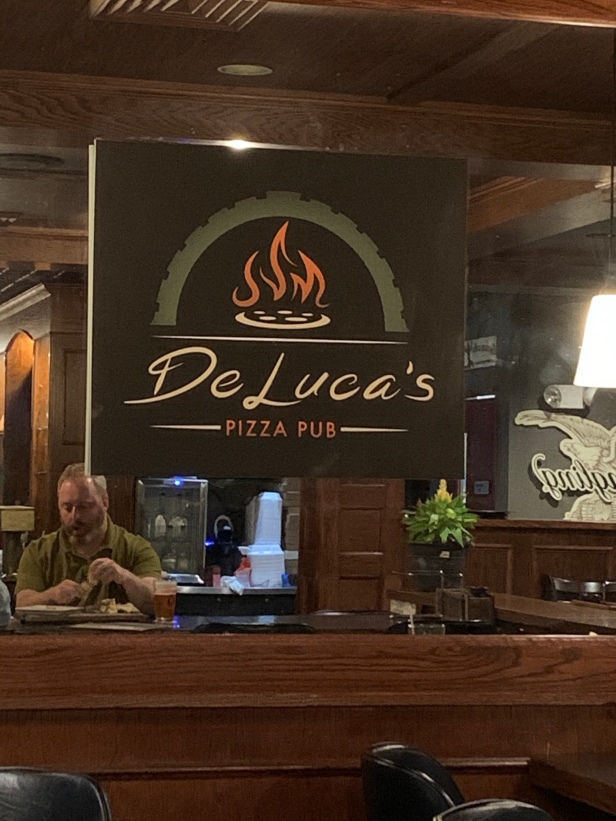 An anxious wait followed, carefully watching social media for the eventual opening and the rave reviews that followed.

And so the group finally went to check it out. And discovered … well … first and foremost, that it was really difficult to find. Because the plaza lacks signage and lighting and, well, basically the look of actually being a habitat for real human life of any sort. Maybe we should work on making the theme more “great place to come eat” and less “we’re suffering from a permanent power outage,” no?

But first, ALL THE BREAD AND OIL. Like seriously, entire wheat fields were sacrificed to bring this spread to our table this evening. 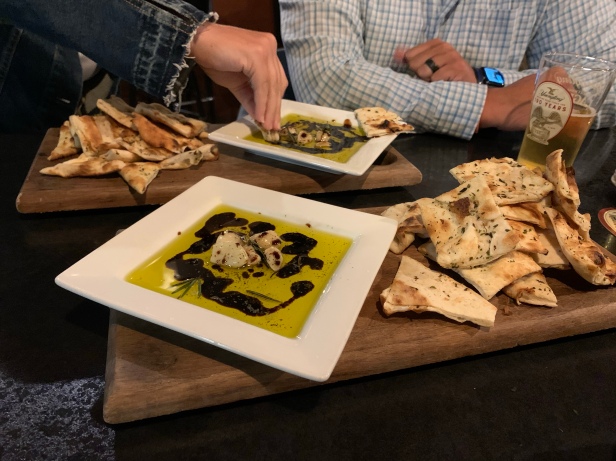 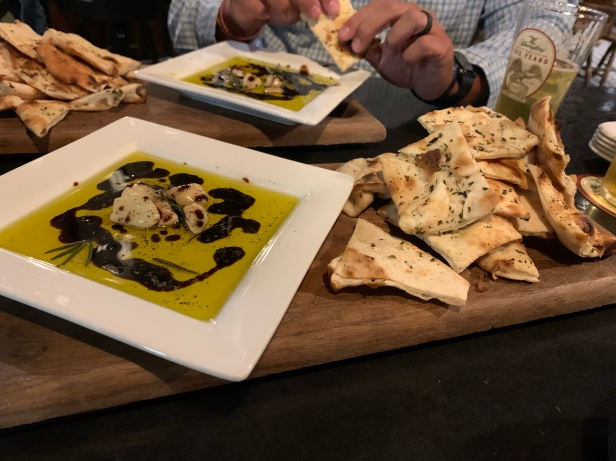 Yes, that’s three orders of bread and oil on one table. Because who needs variety? And also:

Ok, now that we’re past that, let’s move on to the pizzas, since that is the specialty here after all. They have all sorts of specialty flavored pizza, but they for the most part are all NY style. So it you’re looking for deep dish, this is probably not your scene.

Shane got his own pizza – the Wise Guy – because, well, see the photo above. 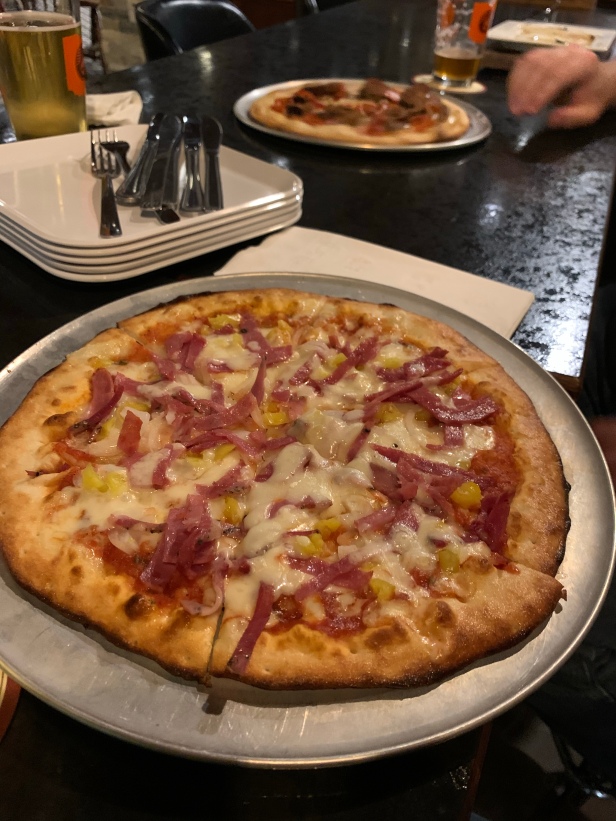 For clarity’s sake, this is a 10 inch pizza. Which we all took one look at upon arrival and knew would barely be enough for Shane alone, so fortunately I was wise enough to order my own meal.

Cassi and Jason got the much larger Meatball pizza to share. 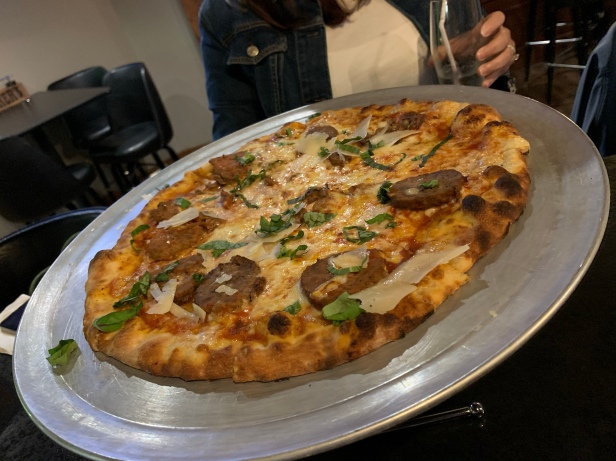 Cassi also got a side salad. 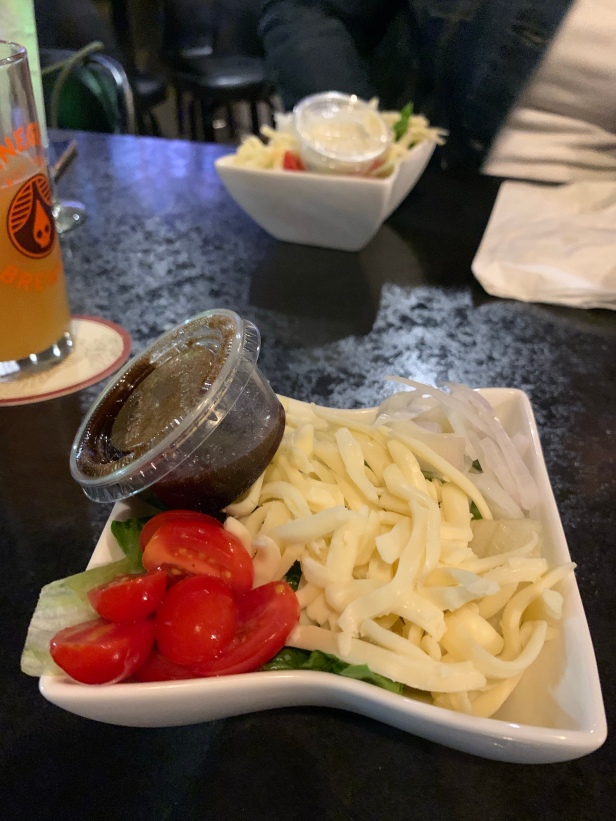 Ted got a pizza he made himself with toppings, not a specialty one. Well, by “made himself” I mean he picked out the toppings, not that he actually went back into the kitchen and cooked it himself – which I would think is obvious, but just clarifying. I mean, could you imagine the outrage? We got bent out of shape when we had to go up and order our own food last week, let’s not even talk about what kind of world it would be if they expected us to enter the kitchen and cook something.

He chose sausage, pepperoni and meatballs. It had minimal cheese, by the server’s admission because of all the meats covering it. To which we all replied in a resounding chorus that that’s exactly how Ted likes it. 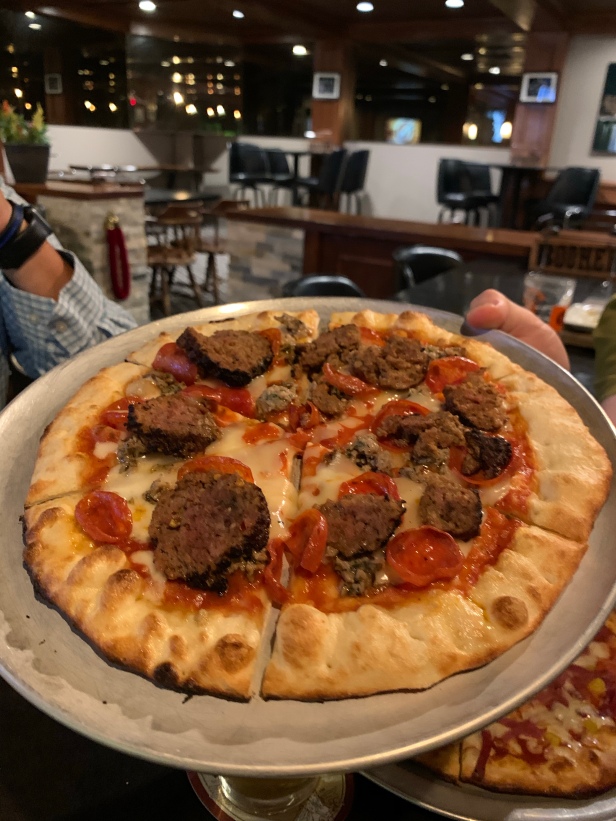 I got a calzone with mushrooms and sausage, and a side salad 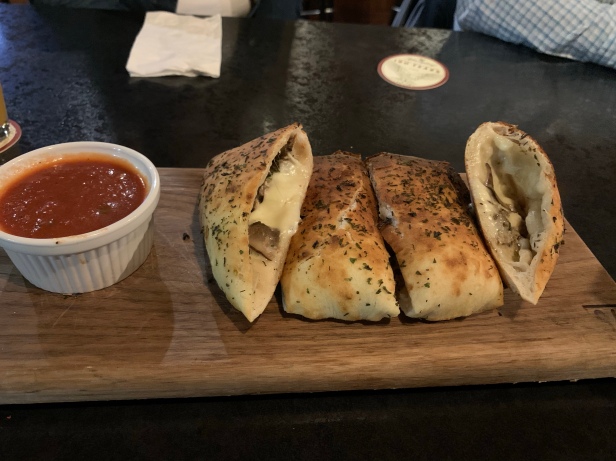 So overall, taste-wise, everything was good. The flavors in the pizza and the calzone were both delicious. The dough especially was amazing, and you could tell it’s all fresh made – even without the note in the menu mentioning the lack of freezers or fryers in the back kitchen. In fact, if all four pieces could’ve been as doughy as the end two slices I might not have been able to hold myself back from eating the whole thing and getting rolled out the back door to the parking lot.

Which, fortunately is shrouded in darkness so at least no one would’ve seen. Maybe we’ve cracked the code on this while lighting situation after all.

Admittedly Shane was somewhat disappointed that the pizzas were thin crust, because he would’ve rather enjoyed the doughier version. Or at least probably been less hungry when we left.

Our bounty of bread and oil was arguably the best part of the meal. Props to the server who told us to smash the garlic cloves into the oil rather than out previous method of attempting to eat them an entire clove at a time. And the bread was really flavorful. While it didn’t soak up the oil entirely, the taste of the bread alone made up for that. It was like those pita crisp crackers turned into a full piece of bread.

Cassi liked her salad so much that she claimed she wanted them to pack her a salad for tomorrow’s lunch. Oh, hey, thank you to-go menu. That worked out well.

But in particular the cheese on the salad was amazing. You could tell it was fresh, not packaged from the Market District grocery down the street.

And the homemade sausage in my calzone was to die for.

So, if you’re following along here, so far on taste one we’re giving DeLucas a five-thumbs-up rating.

But here are our biggest issues with the place, and the reason for us saying it’s not Howie’s – and it won’t get the stellar overall rating that we gave that place. For one, the atmosphere. Look, I get the reasoning behind wanting to make the move from rowdy “let’s all do shots at 7PM” waterfront bar to classier pizza pub where mixed drinks are called “handcrafted cocktails” and seasonal pumpkin cider is served on draft. 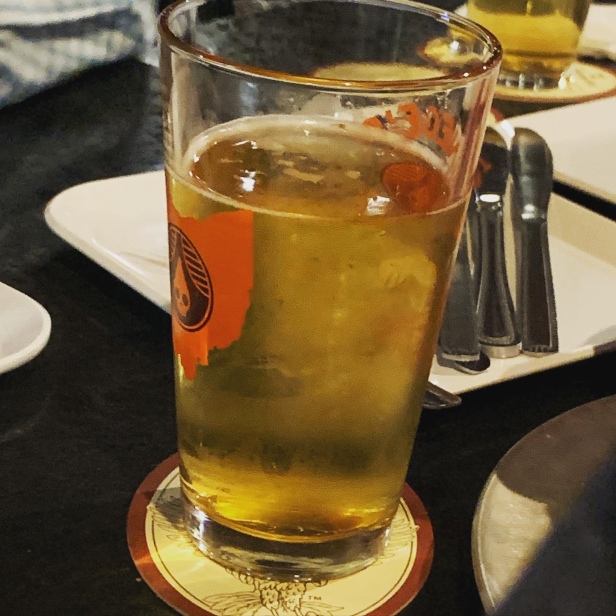 But, well, this leap may just be a little too much for this particular area. I mean, let’s look around … by 7:30PM, we were literally the only people in the place that couldn’t walk into the kitchen without being told we didn’t belong there.

Which may dovetail into our second issue … price. I mean, we get the whole fresh-made thing. And we both enjoy and appreciate that. But, well, paying $14 for a just a step above personal pan pizza and $6 for a draft cider was a little bit disheartening. Maybe in NYC that flies, but not in Green, Ohio. 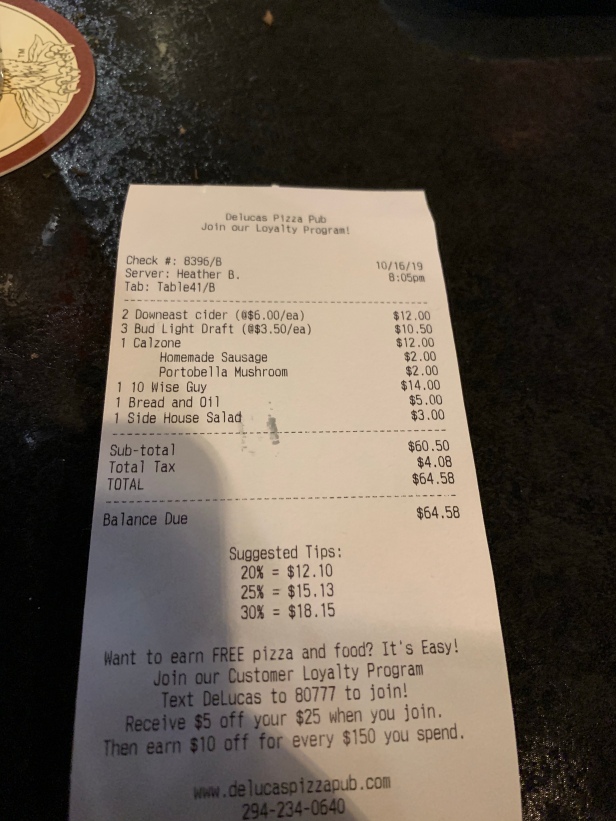 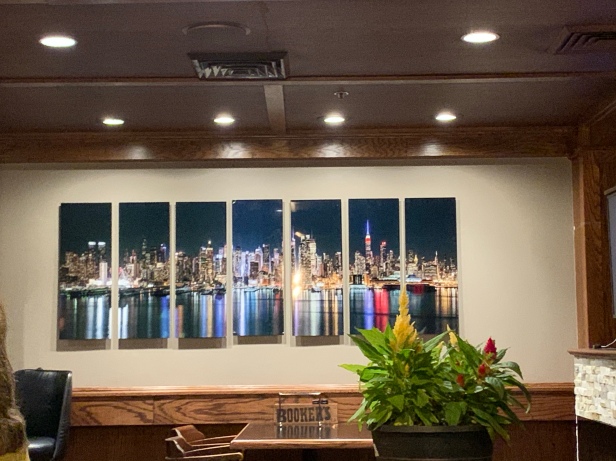 So chances are that as much as we may have enjoyed the pizzas and other bread and cheese products here … we won’t be sitting here a few years from now retelling the story of how much we love Deluca’s. At least not in the same way we loved Howie’s, anyway.

Picked by: Steph
Next pick: Ted 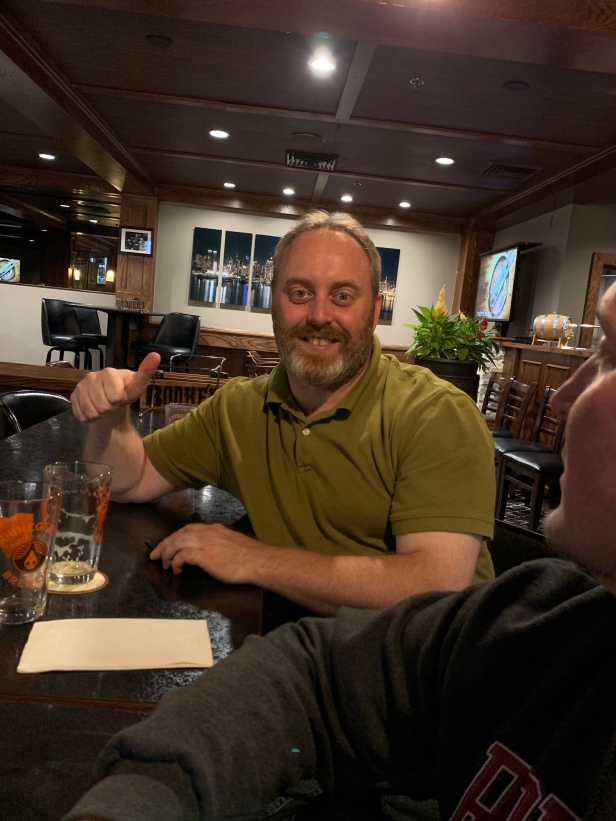 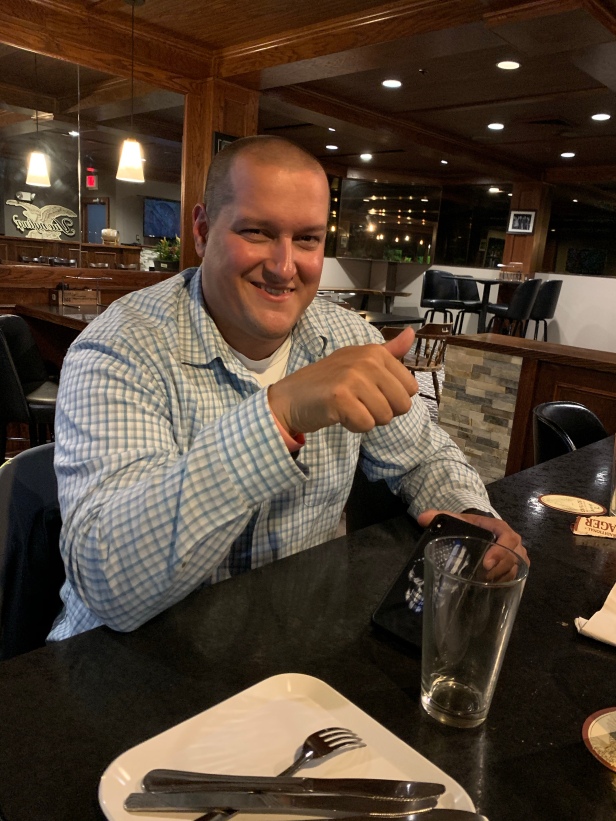 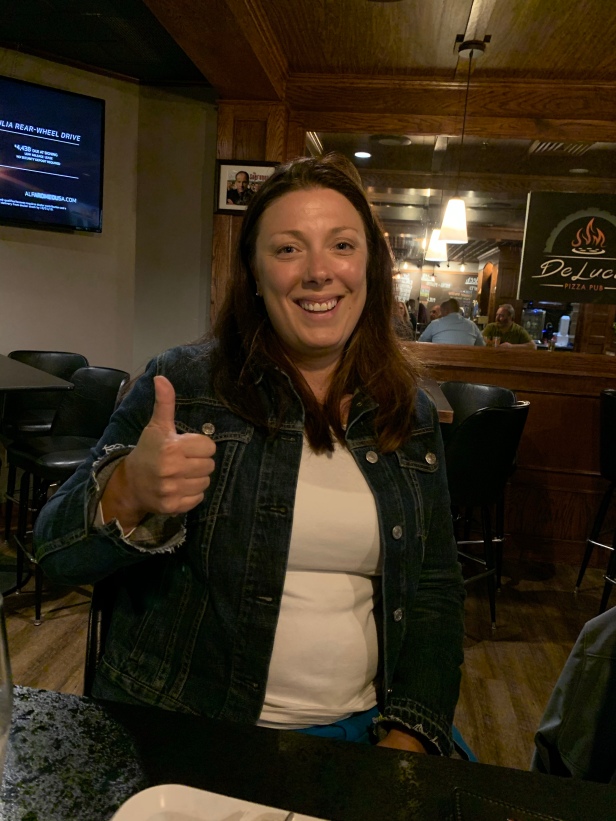 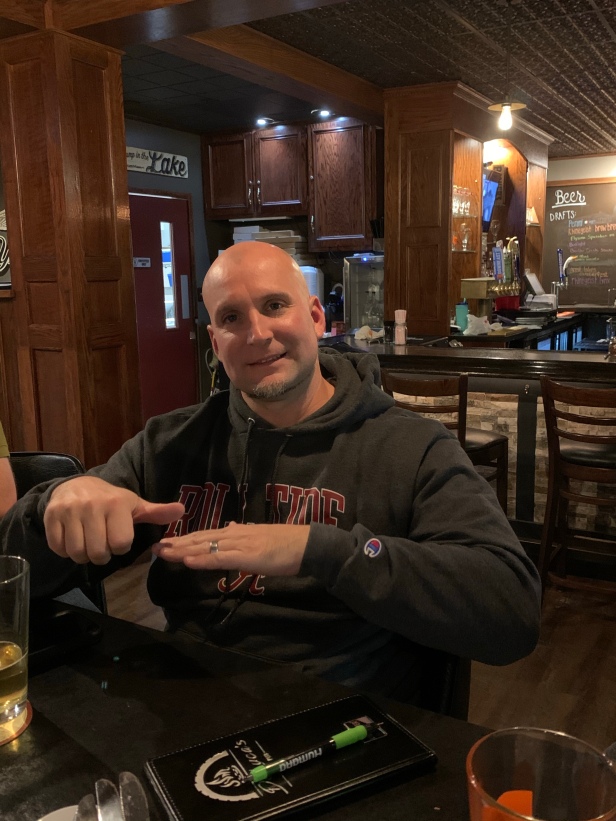 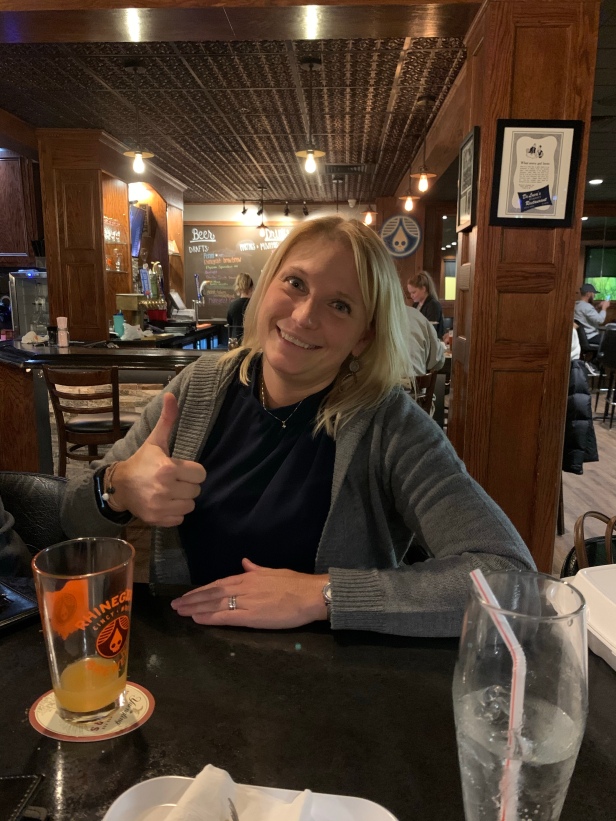 When Ohio finally stops acting like it’s attempting a designation as a tropical rain forest long enough for us to enjoy an evening on a patio, we take full advantage! Tonight’s dinner at @thejettycuyahogafalls included a gorgeous view, a discussion on how much meat is appropriate as a topping on other meat, a gratuitous amount of yellow cheese sauce on nachos (which probably made Ted think a good amount about jumping into the river running beneath us) and a few moments of wondering whether we should be worried about 1/4 of Shane’s chair falling victim to gravity 😬
When hosting the holiday weekend party means you end up with brats, burgers and pasta salad leftovers for daaaayyyyys … you end up ordering things like loaded tater tots, onion rings, Reubens, chicken sandwiches, boom boom shrimp, Philly cheesesteaks, and perhaps the saddest little attempt at a healthy salad we’ve ever seen.
Our luck with #patioweather unfortunately ran out this week 🤷‍♀️😔⛈
Oh Battleground. How we wanted to love you. How we stalked photos of your patio for months on social media waiting for the perfect week to visit. How we had such high hopes when the first sips of house margarita and bites of spicy pineapple guacamole, street corn and specialty corn tacos were taken. How we could’ve ordered several more rounds of drinks and probably spent considerably more money at your establishment - both in this visit and many to follow … had our table not somehow gotten caught under the shadow of invisibility and forgotten about after we put in orders for another round of drinks 😔 We’re typically patient people, and we definitely cut servers slack when it’s super busy or clearly mot their fault. But watching our server hold onto our finalized bill holders with credit cards enclosed as she delivered food to a large party - and then as an afterthought dropped them with us for us to finish signing as she passed back by - that was the final straw of an already patience-testing evening. Food and drinks were amazing 😍👍🏻Getting more of them and being able to pay for them so we could leave was a challenge 😬👎🏻
Occasionally the weather gods actually smile on us for a #wheretogowednesday and we get to enjoy one of the best #patios in #cuyahogafalls ☀️
Tonight we learned the difference between a side and a basket of #fries, that even though the namesake #burger isn’t on the menu anymore that doesn’t necessarily mean it’s not still available, and that Hot Garlic #wings lean more toward hot or more toward garlic depending on who is working in the kitchen at the moment 🤷‍♀️😵‍💫