How many times have we lamented that all the new places keep opening anywhere else but in our town?

Which explains not at all why it took us so long to visit this new brewery, seeing as it has been open since at least the beginning of the summer by now. And also that by “new brewery,” we actually mean the new location of a brewery that has been in existence for a few years now.

But no matter either way, because this is the first time we’ve visited either iteration. Oops.

In any case, Ohio Brewing Company actually used to be in Akron, but recently relocated to a remodeled building on Front Street in Cuyahoga Falls. It’s one of a handful of new places that have popped up in the newly rebuilt downtown area. (Nod to OBC neighbor Leo’s Social Kitchen – don’t think you aren’t on one of our collective lists for a future visit)

Ted assumed one of us would’ve jumped on this OBC pick long before now, and I guess was waiting to give one of us the opportunity, but finally decided to “be selfish” and pick it for himself if for no other reason than to be able to go there on his lunch break from work.

You’re welcome for the look inside the minds of the WTGW Crew, folks. It’s a whole lot of “strategery” hard at work.

Ohio Brewing Company is relatively large inside, with a bar along one side and lots of tables in the rest of the space. Word of warning to the ladies … or, I guess, any guys out there who my want to wear a kilt for a fancy night out … many of the tables are of the picnic variety, so if you want to have an easier time of entering and exiting the table area, you might want to take another look at your wardrobe.

There’s also an area downstairs with ping pong tables and other games. Not quite M&M Taproom in Barberton, where we basically had an entire late 90’s rich family’s basement at our disposal throughout our evening – but I see what they’re going for here.

Well, it’s a brewery, so it only makes sense that we started out with flights of beer, no? Bonus that they arrive on really cool wooden Ohio-shaped plates. Which then afford us the opportunity to pass judgement on various portions of the state based on the type of beer that was placed in that part of the plate. 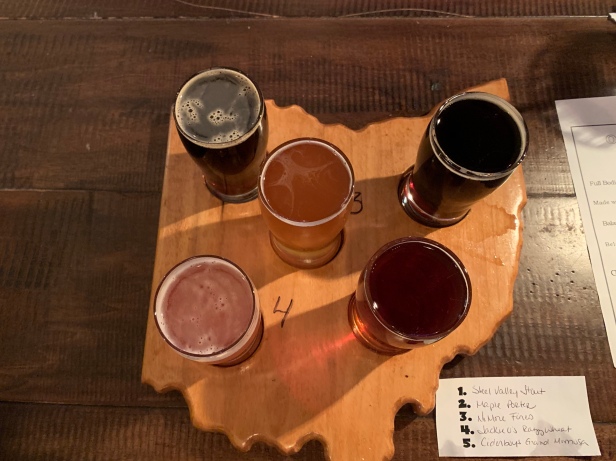 The southeastern portion of Ohio was particularly good to me.

That may be the only time I utter that sentence.

Ted got 12 of the Cajun wings, along with the OBC burger, which is a burger topped with lettuce, tomato, cheese and a spicy onion ring. But of course Ted ordered his sans cheese, which I guess makes it an OB burger?

Oh, wait, that’s not what they were doing there. Got it.

Shane got the same burger but kept the cheese – obviously, because the rest of the world prefers their burgers with cheese, Ted – and also chips.

Well, let me clarify, what Shane ordered was fries with the burger and then a side of chips. But clearly that’s not what arrived. What he ended up getting was chips as a side and then an entire basket of fries later. 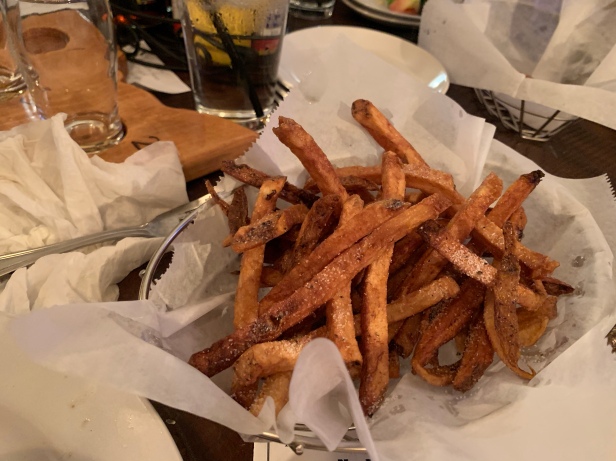 I got the Swiss and Shroom burger with a side salad. 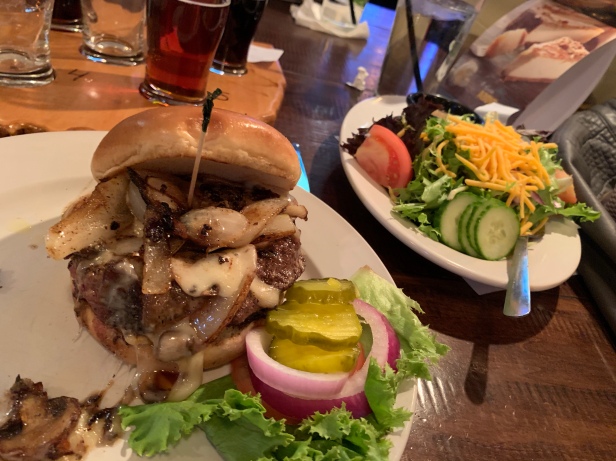 We also got the Hungarian stuffed peppers as an app.

Taking a cue from Shane’s non-food-sharing philosophy, Cassi and Jason got both the pretzel sticks and fried pickles as apps.

Jason got same burger as me, with chips as his side, while Cassi got grilled cheese and a side salad.

BTW that piece of lettuce and tomato wasn’t the side salad Cassi ordered. Just clarifying. I mean, I’m not really sure what you’re supposed to do with some side lettuce and tomato in terms of a grilled cheese – as kind of the whole point of the sandwich involves the cheese gluing the bread together – so it seems like the time for adding something to that mixture has already passed us by at this point, no?

Our apps all scored a thumbs up. Shane and I both thought the peppers were really good. They weren’t super spicy, but the sausage and cheese filling was a really good mix of flavors. The pretzels were voted “delicious.” And the pickles, while in spear form and not the chips that Cassi usually enjoys more, were probably not the best of the bunch – the breading was just a touch too thick – but still decent.

I mean, after we’ve had pickles at Dilly D’s, how can we really ever truly complain?

Ted’s wings arrived and Shane was in full regret mode for the fact that he didn’t order any for himself just on sight alone.

Ted said that as wings go they were good – large wings, decent flavor … but that they weren’t spicy at all.

My burger was OK. It was done correctly – medium – meanwhile Jason’s and Shane’s medium rare burgers looked like they had just been freshly killed out back, so perhaps they unknowingly ordered that elusive side of salmonella with their meals?

Regardless we all agreed that they weren’t the best burgers any of us have ever eaten. With or without the 50/50 chance of potential death.

I also gave up on my bun halfway through. As a lover of good carbs, that hurts my heart just a little bit to say.

Cassi took half of her grilled cheese home, saying it was just too filling for one sitting.

Overall, OBC is a cool place. The menu was a bit small, and quite honestly we all thought that it was one of those times when everything on the apps menu looked better than the actual dinners. Case in point, Shane said he would get an order of the fire onion rings just based on the one that topped his burger.

But our one gripe – because you know we have to have one, right? We’re judgey like that, I know – was that the beer … well … was not our favorite, by local brewery standards. I mean some were of course better than others, and Ted seemed to be the one out of the group to be the most agreeable to the majority of them. And we all know Shane and Jason could really be happy with Bud Light, so it’s not like our standards are super high. But I guess when compared to other local places like our old favorite R Shea’s … it’s really no contest.

And it was a little pricey, especially when it came to the sides and apps. The stuffed pepper app was as much as a burger. And those “extra” fries that Shane actually wanted subbed as the side with his burger were another $4. Yikes.

But will we return? Most likely. Given the proximity to home and the fact that we did for the most part like the food options, I could see it being an easy revisit for those nights when we need a nearby locale.

Or maybe we’ll convince OBC to start a new trend of bar table tennis leagues. I mean, if skew ball leagues are a thing, then it could catch on … right?

Only one way to find out …

Picked by: Ted
Next pick: Jason 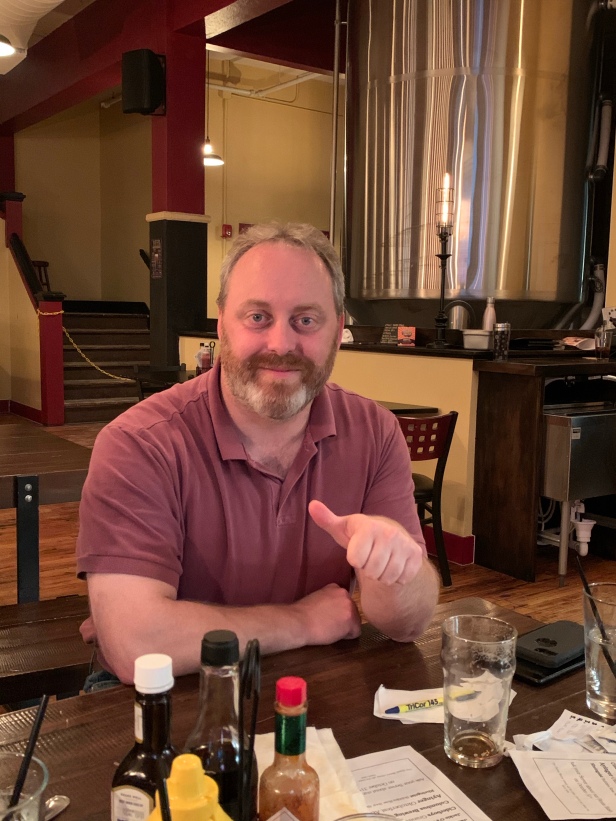 One of these things is not like the other … and is also not mentioned on the table advertisement either. Hmm 🤔
Here’s a fun drinking game (literally) 🍻: match the person in our group to the color beer you think they likely ordered 🤔
Sometimes we drink our alcohol out of fancy glasses - and one tall Bud Light - and I yell at Ted for removing one piece of the spicy cauliflower appetizer before I’ve had a chance to take a proper photo. 🤷‍♀️
Remember that time Shane lost half of the taste buds on his tongue despite being warned that the fried zucchini would be hella hot, and someone in the kitchen thought it would be a food idea for trust us with steak knives speared into our sandwiches? That was fun.
The great patio tour of 2021 continues, with an evening of fried foods galore at Jerzees in Green. Which, while the patio is really just a glorified portion of the parking lot with nothing much to look at other that the traffic speeding by, the connection to the rest of the bar area makes it a pretty cool option. Let’s just say whoever invented garage doors as a complement to bar patio areas is somewhat of a “let’s figure out a way to take advantage of the nice weather in northern states as much as we can” genius. 💡🤯
You know it was a fun night when we don’t get around to posting about it until the next day 😉 Let’s just say that those flight boards you see rounding out our table were only round #1 🍻