If only I had $1.00 for all the times one of us asked if we were going to someone’s house as a WTGW pick.

But, I mean, let’s be real here, restaurant owners. Can we stop putting places so far out of the way that we have to ask ourselves these things? I mean, seriously, we shouldn’t have to get off the highway and traverse across an entire town of ranch houses before we find your sports pub. And even then it’s like an oasis of fun and beer waiting for us on a dark fall evening.

But I guess at least it’s easy to know we’ve arrived. Because, let’s face it, where this particular place is located it was either Tailgator’s, the Salvation Army (which may or may not be serving food) or something called the Minit Mart (not Mini Mart, mind you – Minit Mart) across the street … which if I had to guess likely had some sort of hot dog special.

I think we chose wisely.

In fact, this was a place that had been on my neverending list of eventual choices. It can be either a blessing or a curse when someone else picks a place you have your eye on, folks. The bullet you dodge can be full of regret of many forms.

The jury is still kind of out on which instance this falls under.

So the inside of Tailgater’s is like what if you put a sports bar in the middle of a hunting lodge in the heart of Minnesota. There’s a lot of wood paneling and brick juxtaposed by posters for sports teams and beer specials.

There also must’ve been some sort of a berry air freshener plugged in nearby to our table, because I got a good whiff of it every time I turned my head.

I mean, there are worse things, I suppose?

We also noticed a patio out back – well, OK, really just part of the parking lot that was fenced in and provided tables to make it an outdoor seating/dining area … but hey, you can hang lights over anything and it immediately makes it fancy, right?

Regardless, it was raining – because we’ve already established that Mother Nature is a whore on Wednesdays (see also why it took me over an hour to get home before heading out to Wadsworth for this venture) so we couldn’t sit out there. But good to know it exists.

So, the theme of Tailgator’s is, appropriately, alligator. Clever. Which means that they do have actual alligator meat cooked into various apps and meals. But then part of the theme is also just the names of some of the meals and drinks. Like, for instance, something called Gator Juice, which from the description sounds kind of like it might just be a fancy themed name for a midori sour.

Asked if he would rather drink that or a PBR out of a can, Ted chose the Gator Juice. I’m not really sure what to make of that exactly, but just something to note.

Hey, remember those times when we ask the server what to order and then actually take their recommendations? Well, if not, then you’re in for a treat, because this is one of those times.

The server raved about the wings (kind of a given) and also the Reuben.

Ask and you shall receive.

In particular Shane, who went all in on that suggestion. He already knew he would be ordering the Erie Island wings, since that’s his most favorite seasoning, like, in the entire world. But he changed up his patented “burger and wings” order to a Reuben and wings. 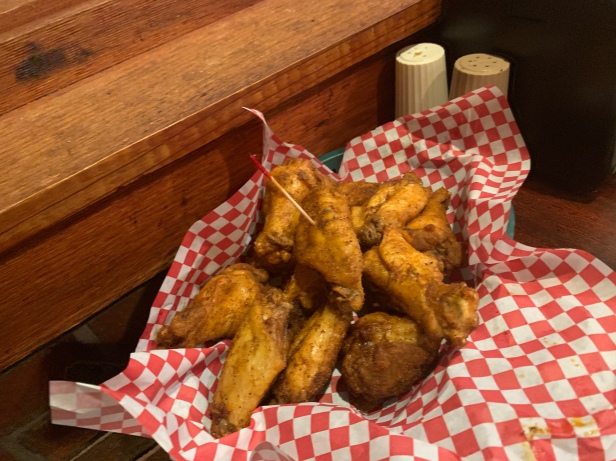 Shane and I also split the pepper cheese balls for our app. Because for all the times Ted shuns cheese, you can pretty much guarantee that Shane and I will order it in some form or another. 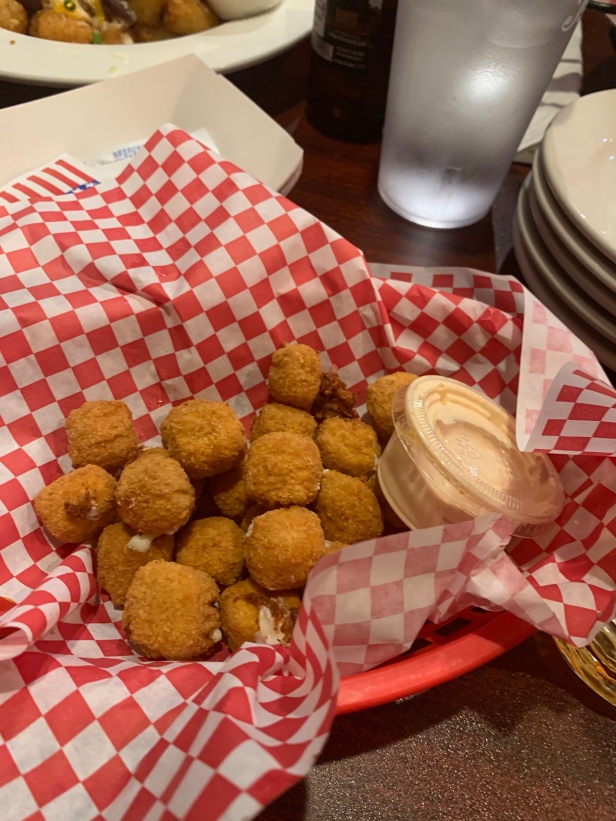 While he did pass on the Gator Juice, Ted couldn’t get away without ordering something on theme, and so he got the gator bites as an app. 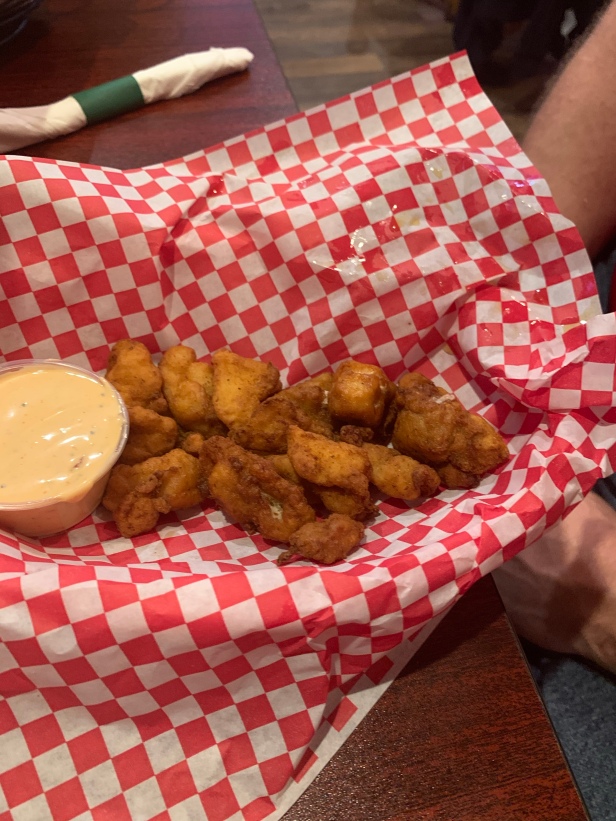 So if you’ve ever wondered what fried alligator looks like … well … kind of like a cross between clam strips and chicken fingers.

Cassi and Jason got something called Gator Tots, which may or may not have had actually fried alligator on them or just been named for the theme. I forgot to ask. But they did include beans, a little fact that Cassi missed in the description and was not entirely thrilled about. But fortunately they also got the buffalo cheese dip, which definitely did not include alligator or beans. 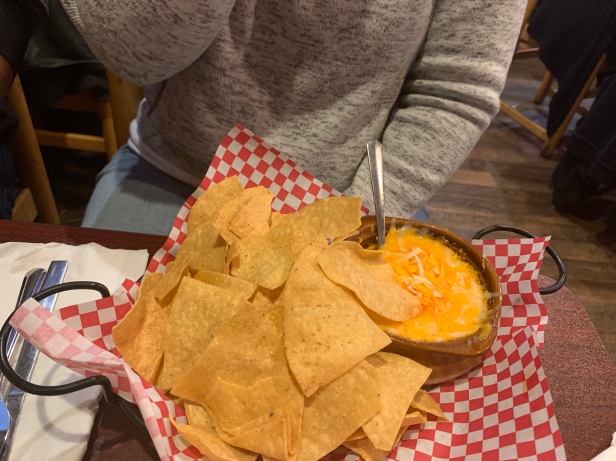 I got six of the Erie Island wings and 6 of the Hot Garlic Parm wings, plus a side salad 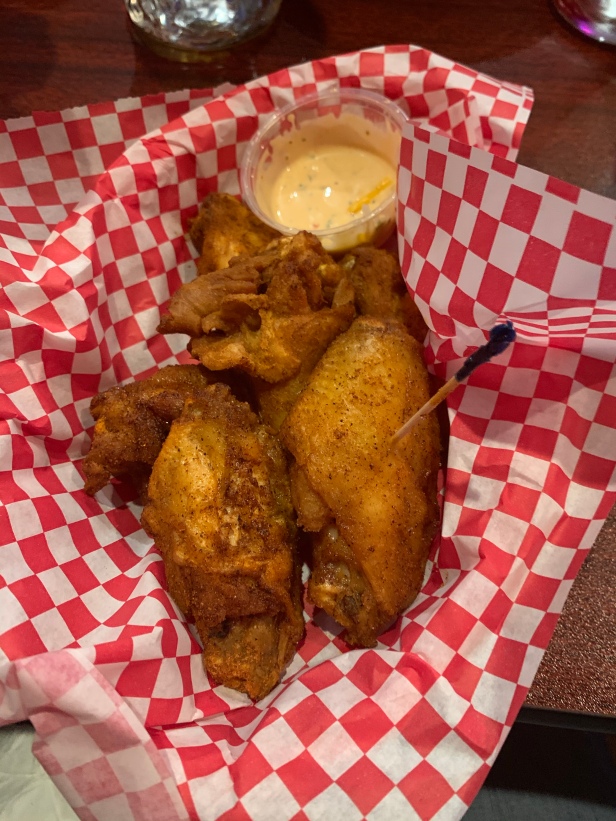 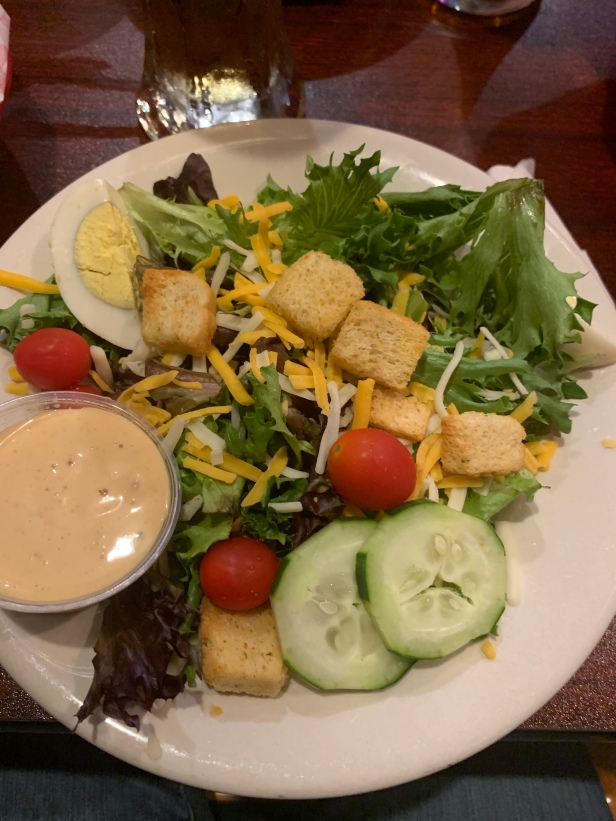 Admittedly I should’ve stuck with just six wings and a salad, but when you can’t decide between flavors and you’re also about to eat your arm off out of hunger, this is what happens.

Jason got onion rings and three orders of six wings – the honey mustard, the honey bbq and the honey bourbon

Cassi got 12 of the Hot Garlic Parm boneless wings 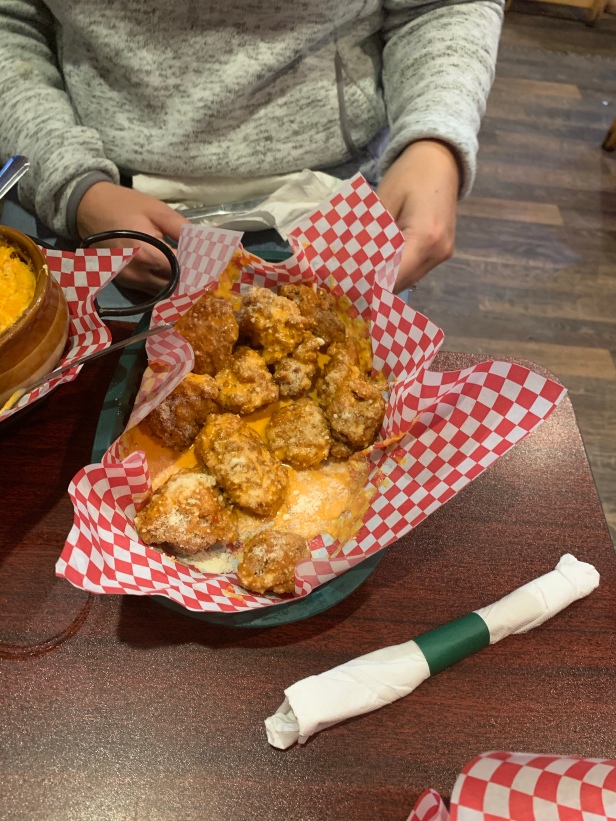 Ted got fries and six of the Six Pepper wings, plus six of the Honey Hot wings. 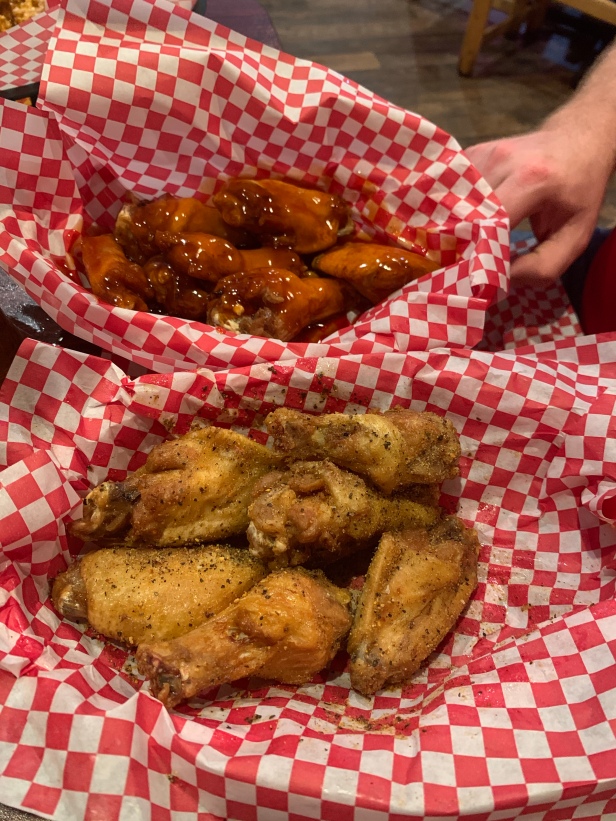 Our apps came out quickly and all at the same time, so that’s a plus. At least it wouldn’t be another of those instances where the unlucky last person to order has to wait about half an evening watching others cure their stomach grumbles.

Once we got to the wings things got a little more complicated, since the kitchen was obviously backed up dealing with the nightly special. So Shane’s Rueben arrived first along with Ted’s fries and Jason’s onion rings – and an apologetic server saying that she just didn’t want to hold those up and let them get cold while the fryers worked overtime.

We barely refrained from telling her we loved her. Barely. She had no idea how much those words mean to us.

The wings were good. The Erie Island was just as good as Shane remembered from the years when we used to order that same seasoning at Cleats. Ted wasn’t so much a fan of the six pepper, but did like the hot honey – which he said was the perfect mix of hot and sweet. And Cassi and I both agreed that the hot garlic parm really has some kick to it.

The chips were also really good. They were crispy without being burnt, a real plus.

Shane ate about half of his wings and then decided to save the rest for a take home bag and start on his sandwich. But then he ended up taking half of that home too. Not because it wasn’t good, but because he said he was just too full.

So if you’re playing along at home, a burger and wings is enough for one meal – but a Reuben and wings is too much. Noted. 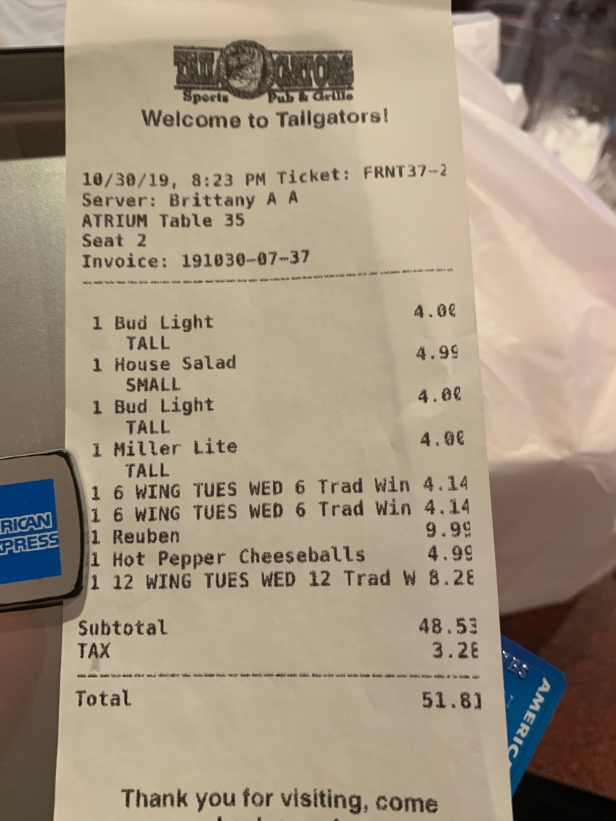 And overall it was a pretty cheap night – $51 for me and Shane, which includes an app and basically two meals for him plus my one … and essentially a lunch for each of us for another time, too. The fact that it was wing night also helped – each pack of six wings was just over $4 – and then each of our beers was $4 – and the app was around $4 … hmm, maybe we should’ve stopped and played fours in the lotto at that Minit Mart across the street on the way home?

Picked by: Jason
Next pick: Shane

Because nothing says it’s almost Christmas like going out for Mexican food, right? 🎄🌮
‘Twas the night before Thanksgiving … and we started out at the Bailey Rd Tavern, because $3 burgers are just crazy to pass up.
We are branching out to the perimeters of our “30-ish minutes drive” radius this week to explore the wonders of Brunswick - because it’s been 10 years we’ve been at this now, y’all, and let’s face it, we’ve been to A LOT of places by this point.
Burgers half off on a Wednesday? I mean, it’s not like this group *ever* orders those 🙄
Words of wisdom from Casa Nueva in Stow 🌮
Tonight’s adventure was one of patience that paid off.