This week’s pick brought to you by a distant relative of the genius behind the naming of retail chains like Five Below and Dollar General.

Well not really. But I think you see where I’m going here.

So Two Bucks takes it’s name, presumably, because several of the items on the menu are only $2. Like sliders, fries, domestic beers and more shots than you would think it’s advisable to offer for only a few dollars each. On top of that, several liquors, like Tito’s, are only $3, including mixers.

Alternate name: Let’s Get Sloppy Drunk for $20. But I suppose that doesn’t fit well on a storefront sign.

But speaking of signage, the interior of the place is decorated with posters advertising all kinds of specialty drinks and liquors, the most intriguing of which was probably a peanut butter whisky called Screwball. Jason was so curious that he got a shot of it (hey, it was only $4!), which we all ended up sampling after it was proclaimed to be surprisingly delicious.

They also feature a large specialty cocktail list. Because nothing goes better with alcohol than lots and lots of written words. 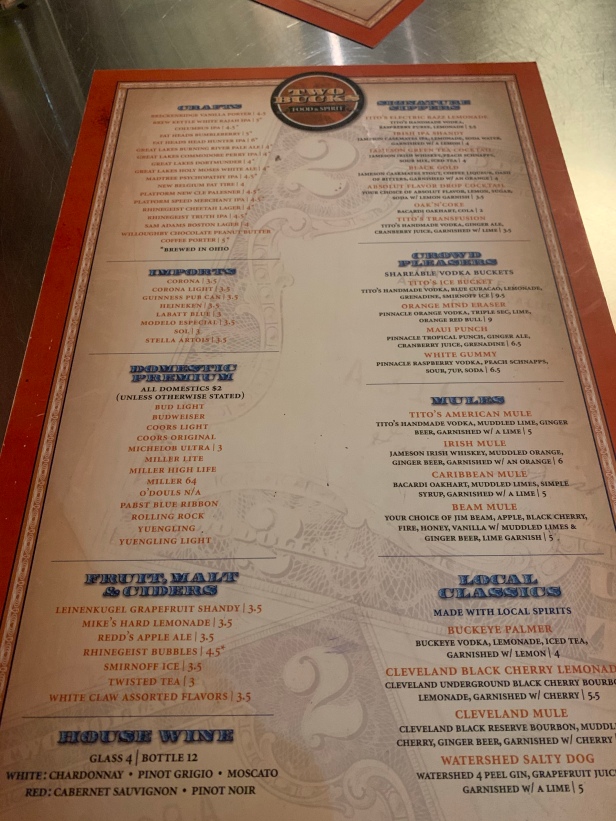 So, all that being said, it would make total sense that the specialty food for Two Bucks is … Mac and cheese?

Yeah, not exactly what you’d expect in a place adorned in alcohol advertisements and table tents touting under $5 drink specials. But according to the menus and website, it’s been cited a “Cleveland Best” in that category.

Mac and cheese, that is. Not bad decor or drink pricing. In case that wasn’t obvious. But I’m sure we could offer some suggestions for either category, no?

It’s probably not surprising, then, that when we asked the server what she recommended on the menu, the top item was the Mac and Cheese. I mean, it has won major awards and all.

But that menu item was closely followed in the server’s book by … well … pretty much almost everything else on the menu. So that’s helpful.

Cassi and Jason decided to start with pretzels and beer cheese.

Ted got the cauliflower wings with the teriyaki sauce. Thus proving there always have to be wings in some form or another on our table.

Shane and I got the “two buck” fries, and – even though it was clearly stated that the pickles were served in the form of spears and not chips – the fried pickles.

We take our chances in this group. Nothing like living on the edge.

Shane also initially wanted to order the fries along with the onion tanglers, I think because they were the only two apps on the menu under the “two buck” category. OK, like I totally get the desire to be economical, but – as Cassi said – there’s a million other good sounding things on the menu and that’s what you go for?

Moving on to meals, Cassi got the Chicken Philly with a side of the Mac and Cheese.

Jason got the Bucket Burger – the distinctive factor of which is that it has a fried egg on it – as well as onion straws and cheese.

Ted got the same thing. Minus the cheese. Of course.

I got the Steak Philly, and also chose the Mac and Cheese as a side.

But then because I wanted a side salad also, I asked if I could just get a small salad to go along with the meal … which then turned into a whole discussion about how the Mac and Cheese only comes in one size, so really getting it as an add-on side wasn’t any different than getting the side salad as an add-on side.

So wait, what now? The side and the meal are the same size? This seems odd, no?

There was already a lot of confusion at the table after that discussion, so we decided to just trust that the server knew what she was talking about and I wouldn’t end up paying $15 for a side salad.

Apparently not sensing the confusion already at the table, Shane gets the complicated order award with his choice of the “meal” of Mac and Cheese – not the plain kind that Cassi and I would be getting as the “side” order, but the special Three Way style (which, yes, we all giggled at when he ordered, because we’re 12) – along with two of the smoked kielbasa sliders and one BBQ bacon slider. 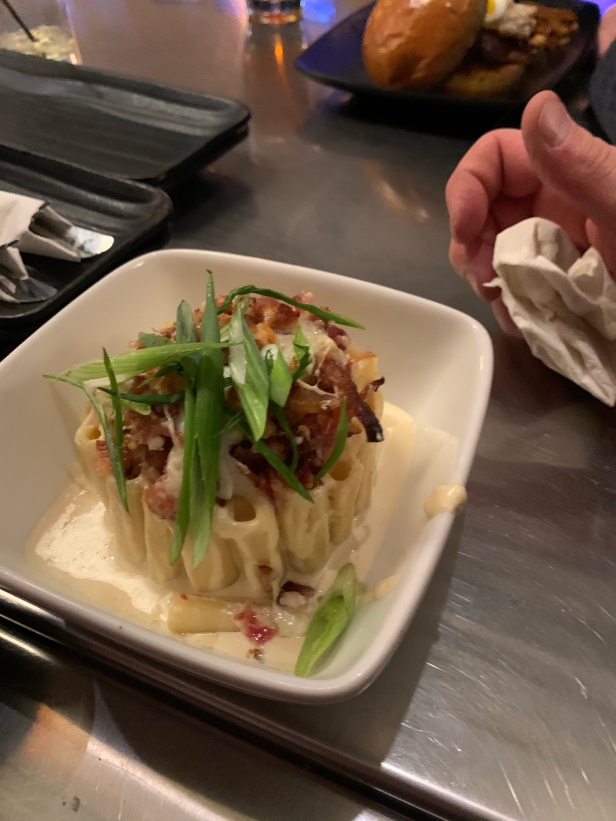 Yes, we were all pleasantly surprised when everything arrived at our table as ordered. Because we all know that could be its own separate award category.

After all the talk about the Mac and Cheese, you’ll be happy to know that it was good. I mean, I’m not sure we agree with all of the awards – Cassi stated that it certainly wasn’t her favorite ever – but it was definitely tasty.  I thought even the “plain” version had really good flavor. And in retrospect I really could’ve just ordered that and a salad and avoided the steak philly altogether, since the sandwiches were the least favorite part of both mine and Cassi’s meals. Cassi said her chicken was super dry. And while my steak was OK, it was nothing I ever need to eat again.

I ended up taking half of my sandwich and half of the mac and cheese home. And already I think we all know that only one of those halves will actually get eaten.

Cassi liked the pretzels, but said that they could’ve used salt. Color us all as shocked about that as we are when Ted orders something without cheese.

But speaking of cheese, make sure you don’t pull a Ted and skip the cheese with the pretzels. It was delicious.

Ted said the cauliflower was good, but that it really wasn’t spicy at all. Cassi tried one and said that’s what she should’ve ordered as her meal, so presumably she enjoyed that one piece more than Ted did the entire order.

Shane actually liked the fried pickles in the spear form (can we all just agree that it’s normal to start singing a Brittany Spears song everytime that word is read or typed?). But then said he added that he was really hungry, so that could’ve affected his decision. So that’s helpful.

I thought they didn’t have much flavor. The breading wasn’t overwhelming – which was a plus – but overall they could’ve used some seasoning. On a scale of Three Brothers to Dilly D’s, it was somewhere in the middle.

Apparently another specialty of the place is a new kind of French Fry that should probably be called “scraps” or “bottom of the barrell,” as they seemed to be fashioned after the tiny bits of potato chips you find at the very bottom of the chip bag. We thought when our app came out with those little pieces that maybe we were just unlucky enough to get the end of the bag of frozen bits dumped into the fryer … but then the fries that came with Jason’s and Ted’s burgers arrived looking exactly the same, so I guess that’s just how they make them? Either that or someone in the kitchen got mad at the frozen potatoes and ran them all over with their truck out back before bringing them into the kitchen? I mean, I’d take option one out of those two, but who knows at this point. Especially with all of these $2 drink specials.

Our bill was really good considering all the food we ordered. Both apps together came to just $5.50, which is less than we pay for one at most places. And my mixed drinks off of the specialty drink menu were only $4 each, which seemed super cheap. The actual meals were the most expensive things – which may be the most logical sentence I’ve typed in this entire review. Oh, wait, Ted’s beers actually beat the cost of most of our individual meals, as it was a full third of his final bill.

Even as we left, we were all still scratching our heads at the whole vibe of this place. Like the name and the drink specials pretty blatantly scream dive bar. But the touting of the award winning, “gourmet” Mac and Cheese along with the atmosphere in the place definitely screams a need to want to be more upscale than that. It’s like the bar version of the movie Pretty Woman.

The playlist also fluctuated somewhere between 70’s rock and tech dance club, which is a grey area I’m sure no one has thought necessary to give a genre name to yet, but I have to imagine this is what would happen if Bad Company and David Guetta suddenly decided to tour together. So there’s that.

We all agreed that while Two Bucks didn’t serve up the best food we‘ve ever had – Ted summed it up perfectly when he said that everything tasted good, but nothing had a ton of flavor to it – it was still tasty and we would eat here again.

And also, cheap drinks. I’ll take Things We Will Never Complain About for $1000 please, Alex. Because we never said we couldn’t be bought. 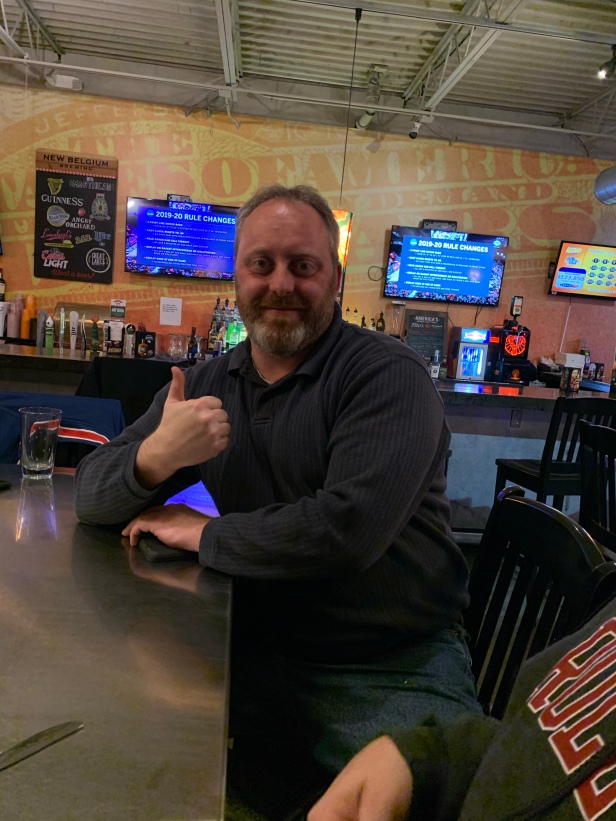 Sometimes we drink our alcohol out of fancy glasses - and one tall Bud Light - and I yell at Ted for removing one piece of the spicy cauliflower appetizer before I’ve had a chance to take a proper photo. 🤷‍♀️
Remember that time Shane lost half of the taste buds on his tongue despite being warned that the fried zucchini would be hella hot, and someone in the kitchen thought it would be a food idea for trust us with steak knives speared into our sandwiches? That was fun.
The great patio tour of 2021 continues, with an evening of fried foods galore at Jerzees in Green. Which, while the patio is really just a glorified portion of the parking lot with nothing much to look at other that the traffic speeding by, the connection to the rest of the bar area makes it a pretty cool option. Let’s just say whoever invented garage doors as a complement to bar patio areas is somewhat of a “let’s figure out a way to take advantage of the nice weather in northern states as much as we can” genius. 💡🤯
You know it was a fun night when we don’t get around to posting about it until the next day 😉 Let’s just say that those flight boards you see rounding out our table were only round #1 🍻
When it’s a billion degrees outside with a 50/50 chance of rain … you forget the Great Patio Tour of 2021 and revisit an old favorite. And realize they’ve reworked their menu. So much so that while Ted was able to strike a deal replacing the cheese on his burger with jalapeños, unfortunately Shane was unable to request a specialty remake of his old fave Triple X burger - which also involved jalapeños. Such is life, I suppose 🤷‍♀️
You know what, too few restaurants greet patrons at the table with a complimentary basket of kettle chips and homemade French onion dip. There, I said it.