Here’s a quick lesson in how to be confusing: open two breweries within a relatively short span of time from one another, in neighboring areas about eight miles apart … and then give them very similar sounding names.

Which is the story behind how our GPS was trying to direct us to Missing Mountain Brewery in Cuyahoga Falls – which we’ve tried to go to at least three times now (including this magical night) but haven’t seemed to find the secret password needed in order to get a table in their seat yourself environment – when really we wanted to go to Missing Falls Brewery – which is located in the same building as R. Shea’s newest location near downtown Akron, and Ted’s pick this week.

Seriously, was there some sort of rule that came out in 2018 that all new breweries had to have the word “missing” in them? Does no one own a thesaurus?

Side note, we were at the new R Shea’s location a few months ago for a Saturday night out, and we really liked it. I mean, we’re still partial to the original location in the Valley, but with the same great beer selection and expanded food options, we definitely enjoyed visiting this location as well.

Missing Falls looks very similar inside to R. Shea’s – the open industrial look showcasing that the building was once a factory, a big room with a bar in the center and several tables scattered around. There’s also a patio space outside, but since it was about 20 degrees on this December evening, we wisely opted to stay indoors.

And in this case it was also wise because being outdoors would’ve made it that much harder to get to the bar every time we needed to order something. That’s right, Missing Falls features our least favorite system of ordering, where instead of having servers, you have to go up to the bar and place your orders yourself. Because that always bodes well for us.

Here’s looking at you, Erie St Kitchen. Oh the memories.

We also walked into the space in the midst of some sort of card game at several of the tables. A look at the website after the fact confirms it was a euchre tournament. But without that knowledge in the moment it was kind of walking what you thought would be just a house party, and discovering it’s really a championship game night … and that you had forgotten to bring the game board, team, and rule book. So we’ll just drink and eat all the food then, I guess. Cool. I mean, that’s really kind of our usual thing anyway.

So the beer specialty at Missing Falls seems to be of the IPA variety, which Shane somehow glossed over when reading the descriptions and ended up ordering a few of as part of his flight. And we can l guess just how happy that made him, no? 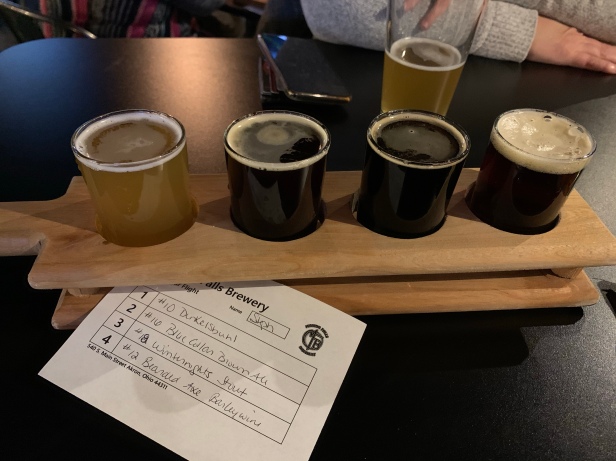 I think part of the reason he missed that, though, was because we were all super excited to see that there were about five different varieties of chips offered on the menu. Flavored potato chips?  And not just BBQ, exotic sounding things like Maui Onion, Sriracha Honey, and whatever the hell Hai Poke Wonton might be? Yes please, sign us up.

Gentle PSA: this is what arrives when you order those.

I mean, they are the advertised flavors. And full disclosure, they are still awesome. But I kind of feel like they were cheating a bit with the product description here. The menu specifically points out that all chips are gluten free, cholesterol free, kosher, cooked in peanut oil, come in these tasty flavors … that, oh yeah, let’s not bother to mention, we didn’t make here ourselves. Our bad.

Or maybe they should just team up with The Lockview, home of the Lawson’s French Onion dip served at our table in the actual plastic tub like they just bought it at the corner store down the street.

Because we seem to be in a groove recenty of everyone at the table ordering the same thing, it makes sense that Shane, Cassi and Ted all got the same sandwich, The Hitman. 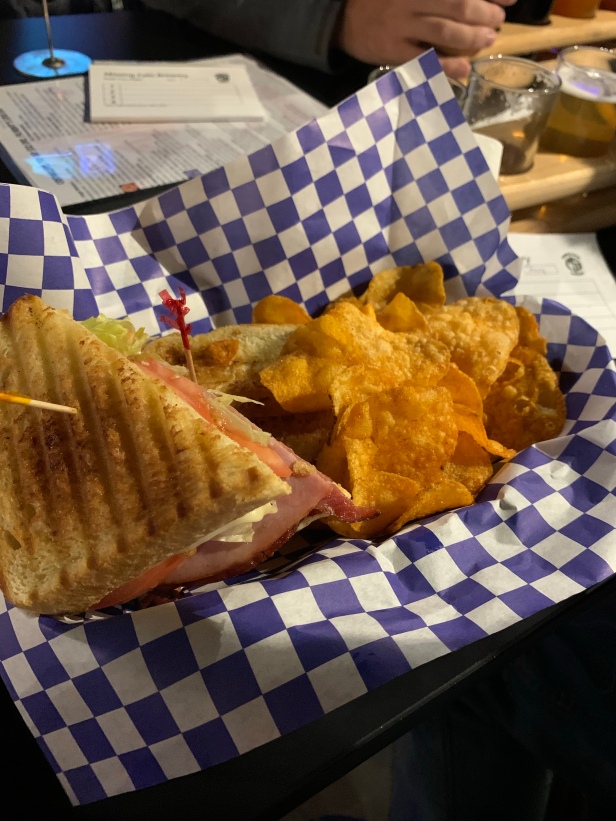 Before you think maybe you’ve had too many beers through the wonder of osmosis and this post, those really are three different pictures of the same sandwich, just with different chips.

See also: making up for the times I forgot to take photos of things with a million pictures of one sandwich. Whatevs.

I got the El Dorado pizza.

Just one photo, although it kind of almost doesn’t fit, so I guess I could’ve taken two?

Jason got the BBQ wrap with the BBQ chips.

Cassi and Jason also ordered the pretzels as an app, and were predictably thrilled when it showed up with their meals instead of ahead of time as the word appetizer would imply. 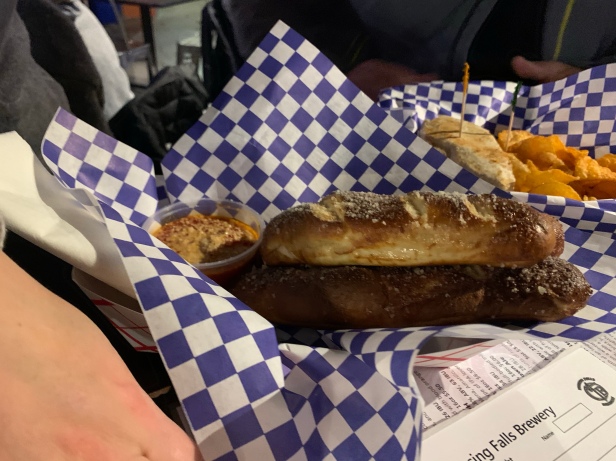 So if you like the feeling of your mouth being engulfed in flames, you should definitely order exactly what I did. Sriracha chips paired with a pizza featuring sriracha sauce drizzled on top may have been slight overkill. Or at least a killer on my taste buds. But what they tasted before dying out was definitely enjoyable.

The pretzels were also winners of the evening. I commented that they looked delicious, to which Cassi relied that “oh they sure are.” And everyone said that they liked the sandwiches also. I didn’t hear any notes about Top 5 material or anything like that, but perhaps that’s just because that list isn’t as easily maintained as the burger and wings lists, since, you know, we typically order those every week.

(If you haven’t guessed, Missing Falls doesn’t offer burgers or wings, so therefore that’s why this was a rare week with neither option showcased on our table. I’m sure we’ll be back to normal next week.)

But even though the food was decent, we all had to agree that the beers were a disappointment – and probably the biggest hinderance to a revisit decision in the future for us. Of course we’ve all learned by now that product descriptions are misleading – I’ve been suckered in far too many times by the words “hints of caramel and chocolate,” only then to be served a glass of something the consistency of motor oil that tastes like tree bark. But even so, there’s still usually one or two on a flight that we order on a whim and end up surprising us.

And even though Shane was struggling through this paradise of IPAs, you would think that Jason and Ted – who typically enjoy variations of them – would find something they enjoyed.

Nope. There just wasn’t a clear standout, despite ordering across the board and trying things we usually lean toward.

And this was where the location of Missing Falls Brewery may be a hinderance to them … because we all agreed after we finished our meals that, to be perfectly honest, if we were going to be in downtown Akron – and in the same literal building as R. Shea’s – we would just rather go there, and have beers that we already know we enjoy.

And so that’s where we ended the night. We still like the location in the Valley better than the one downtown, but it was still a better option than the wealth of IPAs and tree bark flavored motor oil we would’ve continued with at Missing Falls.

I think we discovered what the “missing” stands for in this instance. We’ll bring you a few flavor suggestions along with that thesaurus next time around.

Picked by: Ted
Next pick: Jason 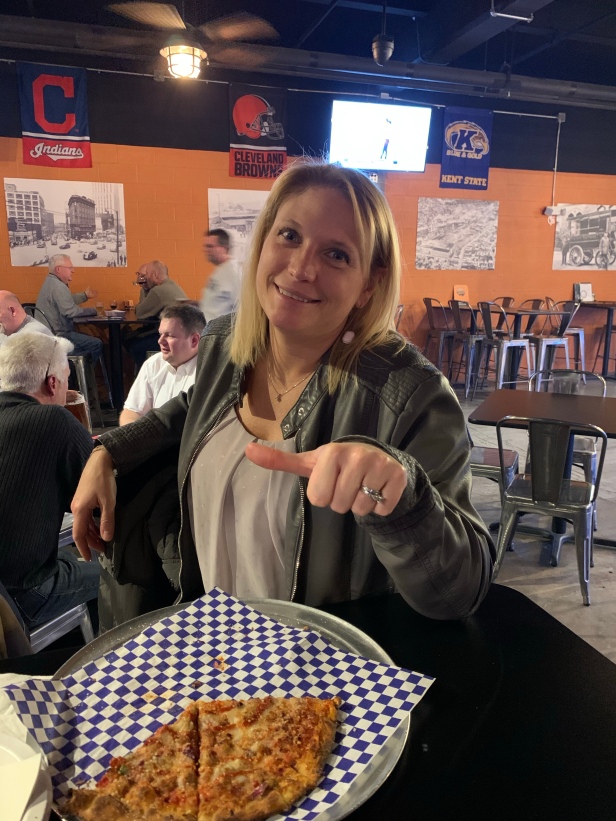 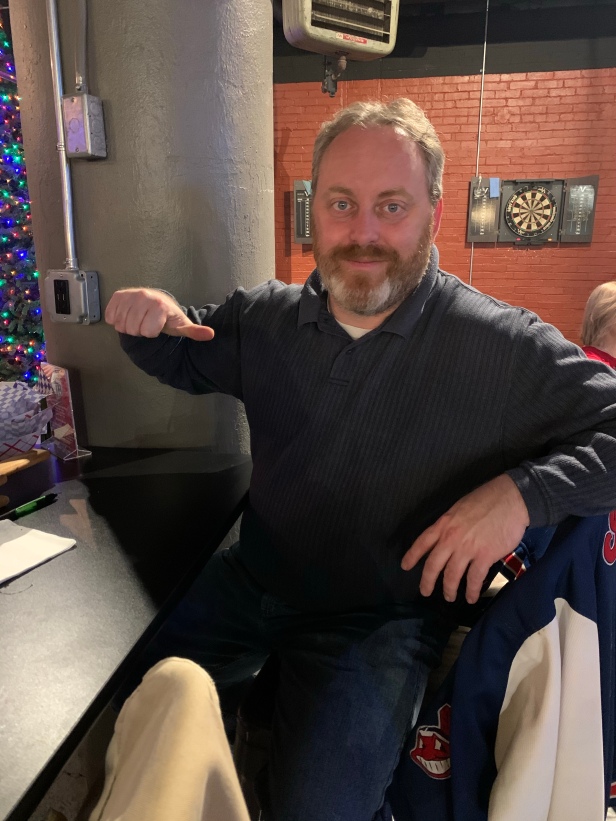 How quickly we can go from classy to drinking Christmas themed drinks out of plastic boots: a story in two parts
Well, we feel seen.
Maybe it’s the fact that it’s nighttime now by 5pm, but something steered us down the road of dark beers this evening. Although let’s be honest, do we really need much arm twisting to go down any road that has beer of any color on it? 🤔🍺
Sometimes our Wednesday outings are less about trying a new place and more about finding comfort laughing with friends over some fairly strong alcoholic drinks now a familiar place. Tonight was one of those nights. 🥃🍺
This week we’re all about #wings ! Lucky for us they’re the Wednesday night special at The Clubhouse.
One of these things is not like the other … and is also not mentioned on the table advertisement either. Hmm 🤔