Sorry for the absence, but with major holidays like Christmas and New Year’s Day falling on Wednesdays this year, we had to sit a few weeks out. I mean, as much as we love showcasing our functioning alcoholism and ability to continuously outsmart the odds of a heart attack with cholesterol-laded foods … OK, so really the holidays aren’t much different than any normal Wednesday for us, other than they provide an opportunity to share those qualities with our families, in the comfort of our own homes.

But here we are in 2020, and nothing says crisp January evening like a tiki bar, am I right?

Tiki Underground has actually been a kind of “edge of the list” pick for the group for a bit now, ever since it opened in 2017(ish?).  I think part of the reason we were waiting to pick it was because this ill-fated location never seemed to house any sort of restaurant for too long of a time period, so we didn’t want to get our hopes up that it might be something we liked that would also stick around.

Case in point, we’ve been to this building when it was a Mexican restaurant (pre-blog) … and then when it was a sports bar called Sidelines … not on a Wednesday, but instead for an Ohio State/Michigan football Saturday after we got kicked out of another place for showing up and walking in the unlocked door 10 minutes before opening time. Seems those owners might be related to the folks who own Harmon’s Pub down in Canton?

But those places closed in a relatively short span – we’ve only been doing this since 2013, kids – and so it’s not a stretch to say that we didn’t really have high hopes for this new place, especially with a theme this specific. If a sports bar can’t make it, can we seriously hedge our bets on Hawaiian drinks and Polynesian cooking?

Apparently, we can, since it’s still open three years later. Or, someone can, anyway. It just may not be us.

Did I spoil the suspense there?

So let’s talk about the drinks first, because there’s clearly a lot going on here in that department. 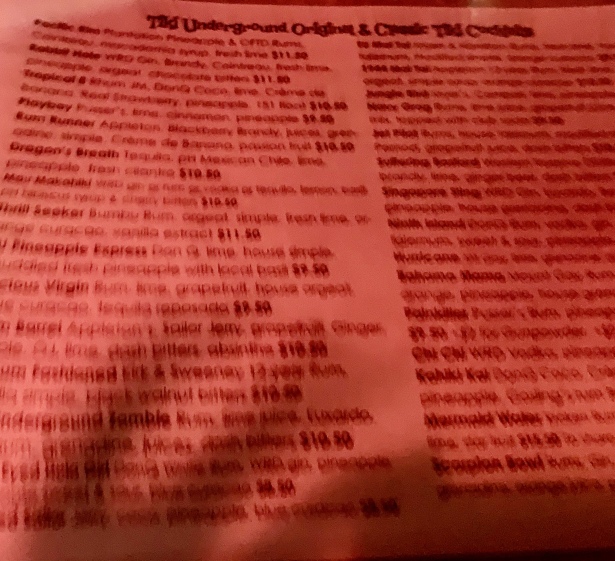 That’s a lot of words that all mean “alcohol” in some way.

I mean, it is a tiki bar, after all, and drinks are kind of the main point. So I guess they’re kind of winning in that respect?

Although they may want to turn up the lighting in the place a smidge so that we can read what is in said drinks. And before you joke about calling us old – which, full disclosure, we did to Ted when he pulled his phone out to use the flashlight feature just to read the menu – we weren’t the only ones who went down that road. I mean, if you can’t tell from the photos, it was pretty unlit in this place. There were lights behind the bar, but everywhere else they were certainly more decorative than functional.

Also, who doesn’t want to see … whatever this is … more clearly? Because we all love having nightmares.

So once we could finally read the menu, we discovered lots of rum drinks – which is on brand for this whole island theme. But for those of you who prefer to avoid the hard alcohol, they do also have regular beer. In fact a whole section of “old man beers” like PBR ($2 on Wednesdays!) and Bud Lite. And White Claw and wines.

I was the only one to order something fun. 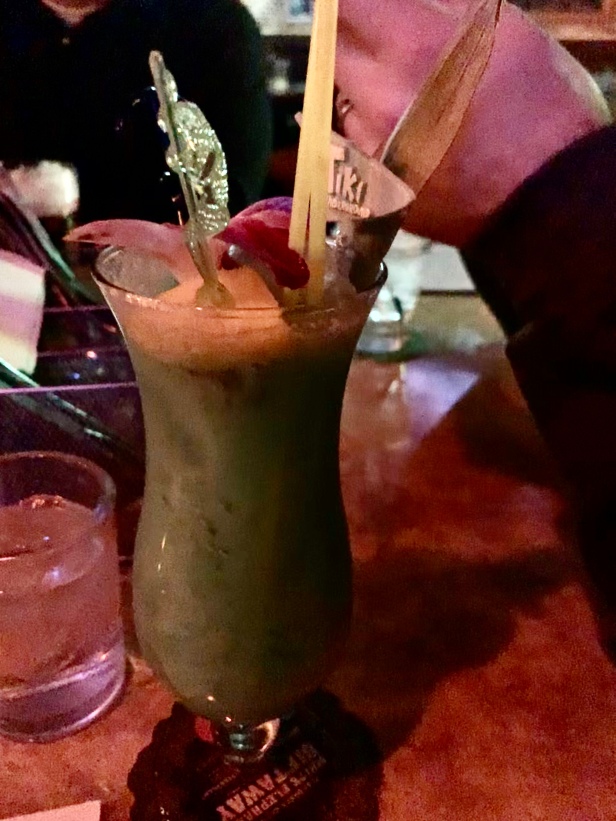 The food special for Wednesday’s is an “adult happy meal.” Which is exactly what it sounds like it should be – a burger and fries, with a beer. At $10 it’s a little more pricey than McDonald’s … but, well … beer.

Ted started out with edamame as his appetizer.

If you’re thinking that looks a little odd … well, so were we. It arrived already shelled, which is not how we’re used to seeing that particular dish served. Ted said he would offer to share it with us, but it would’ve been a little strange since we would all need forks.

Cassi and Jason ordered the Crab Rangoon for their app. See above note as to why there is no photo of this dish.

Have we mentioned it was dark in this place?

And then Cassi got six of the boneless garlic parm buffalo wings.

If you think that photo is bad, just imagine what the one of Ted’s wings and of the crab Rangoon looked like. This is clearly not the place to be taking any magazine quality food photos.

I got the chicken soft tacos and a side salad.

Shane ordered the same thing. Yep, the exact same thing. If you’re thinking that sounds strange, and that I also didn’t mention an appetizer for us … well, now might be a good time to mention that Healthy Shane has rejoined the group, as he seems to pretty much every January. Because we all love the fun of watching him watch all of us eat completely unhealthy meals – or in this case, drool over just the smell of the crab rangoon when it arrived at the table – and drinks we actually want to taste while he complains about still being hungry and makes a bitter beer face every time he sips his tequila and soda.

Unfortunately for Shane, Cassi confirmed that the crab rangoon tasted as good as it smelled.

So the moral is, avoid the garlic sauce.

Although if you ask Ted, he might tell you to just avoid the whole place altogether. Between the weird edamame, wings that were breaded more than he likes and a not-so-delicious sauce on the fries, it was pretty much a strike out for him. Add to that all of the mixed drinks being laden with rum and other random mixers Ted isn’t a fan of. And most of the beers were also not-Ted-friendly, which meant the only thing he could drink was a Guinness.

So yeah, it definitely earned less than a thumbs up in his book. He said the only redeeming factor for him was the service, which was decent. Sort of.

Shane and I thought the tacos were good. They kind of had a sweet taste to them, but they were pretty tasty. But I would much rather come back on Thursdays, though, when they’re only $5 for three tacos.

The place does have some decent specials, and some of the food is better than expected. But I’m not sure the “some” here was enough to warrant us a return visit. For certain we know we don’t want to return when the band from this particular night was back on stage. And I use the term “band” lightly, as it was really just a guy with a microphone and guitar, and a really, really loud speaker system. To say it was a little bit intense for the crowd of less than 10 that was in place on this particular evening would be an understatement. We probably could’ve reversed the lighting and sound levels in the place and made for a much more enjoyable experience. 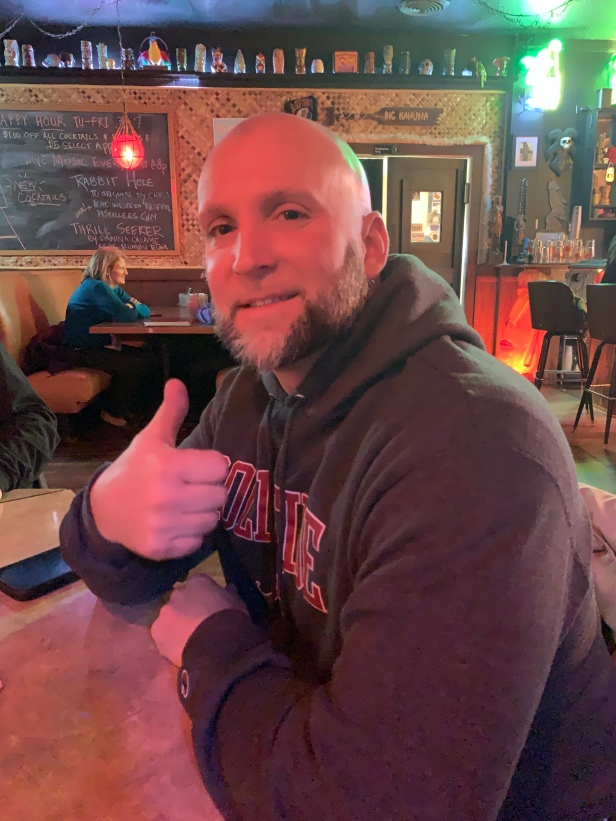 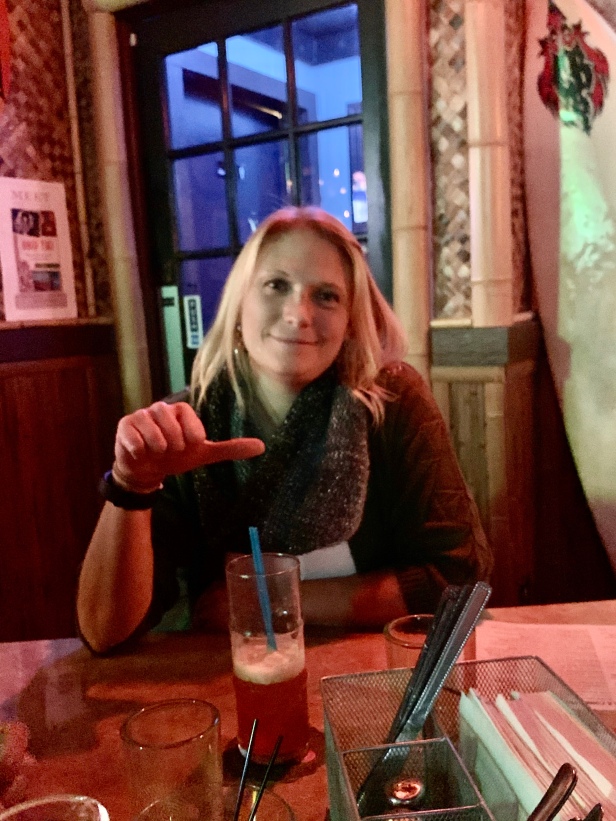 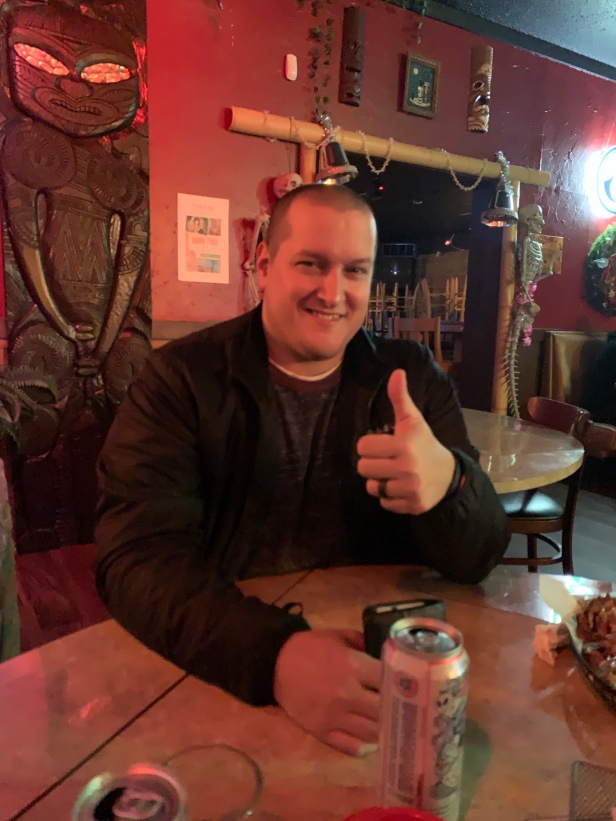 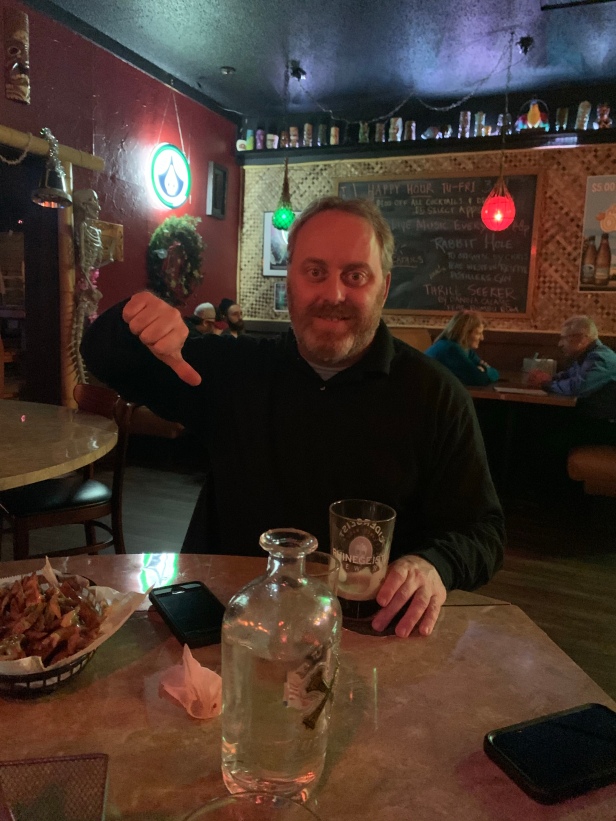 We may or may not have made our restaurant choice tonight based primarily on available desserts 🍰
Don’t you just love when your #wings look like they’re all tucked into a little bed when you open up the #carryout container?
When it’s snowy outside and one of us has a hankering for a sandwich of some kind and some giant onion rings ... well let’s just say we’re thankful to have places like @ontapcfalls nearby to grab some carryout! Full review coming to the blog soon 😁
Move over ... well, honestly we can’t really remember who was on Shane’s Top 5 List prior to tonight because it changes so often anyway 🤷‍♀️... but whoever #5 was they should assume they’ve been knocked off, because Shane has declared @uppercrustoh one of his new faves!
Yes, those are VEGETABLES 🥗in that last picture.
Oh look, it’s that new Invisible Burger everyone has been talking about 😂🍔