Move over Musketeers, I think we have a new top spot on the list.

Located in the Tallmadge area (which BTW is apparently Ted’s own personal Bermuda Triangle of undiscovered dining establishments, so chances are you’ll see us back in that area in the near future), Delanie’s Grille is definitely a hidden gem. It’s a true neighborhood bar, one of those places where you half expect the place to erupt in a chorus of “Norm!” whenever one of the regulars walks in … but yet they don’t all stare you down from over the tops of their beer mugs and let the jukebox screech to a halt as soon as someone new walks in.

Our waitress was actually the owner’s wife – a fact she didn’t tell us, but we deduced from her name and several mentions within the menu, because, well, we’re pretty smart like that – and mentioned after she overheard us say we were newbies that she thought we “didn’t look familiar.” For someone who took our whole not-exactly-easy order without writing anything down and didn’t mess anything up, I don’t doubt she really does remember faces and names of frequent flyers to the establishment.

So, Wednesday nights are half off “grogs” – which, when we asked what those were, all we heard was basically “contains so many liquors that we can only serve you two of them max.” So of course we all had to try them. Especially for $4.00 each. I’m still not sure exactly what was in them, but it was a large mug of very sweet deliciousness that didn’t taste like alcohol at all, so really I don’t see how that can be bad, ever. Shane was the only one of the group to hit the two drink limit – which, you know, is good since he was our driver. But honestly I don’t think any of us felt the effects any more than we would after a few regular mixed drinks. I’m not really sure what that says about our tolerance levels.

A round of grogs. That’s just fun to say.

And truthfully I might’ve ordered another smaller drink, or a beer or something like that, but if I have one complaint about Delanie’s it’s the lack of any sort of a drink menu to choose something like that from. I mean, while our sever did a wonderful job of explaining to us what a grog was, when we asked about what beers were available the best she could do was point us in the direction of the bar and let us know that the 100+ varieties of bottles were in the cooler behind the bar if we wanted to look. Which Ted did … and we lost him for about 20 minutes as he got sucked into a conversation at the bar with two of the regulars. I guess he was fresh meat.

Speaking of meat, our table was full of it when our dinners arrived. I ordered the cheeseburger wrap – something I’m fond of in pretty much any restaurant, but once I saw the “National Hamburger Festival Award Winning” distinction next to it then I knew I had to try it. I was not disappointed. Although the rest of the table might have been upset that I stole all the napkins, since my dish definitely required a few in order to keep me from wearing any of it home.

Amanda had the steak sandwich, and was impressed to find that it was made of chunks of actual steak, not shaved slices or imitation Steak’ums like what you’ d find at some places. It was so filling that she ended up taking half of it home. Shane had the Delanie burger and of course a 6-er of wings, because, well, why wouldn’t he.

Ted is apparently on some sort of strike from bar food, and had the orange roughy. I’m noticing a pattern over these past few weeks. Either a fryer has wronged him in some way recently or he’s just trying to make a name for himself as the one person in the group who orders off the “entree” side of the menu. Whatever the reason, at least he was happy with his decision.

Another thing that really impressed me about Delanie’s is that everything came out to the table steaming hot. From appetizers to entrees – everything was at the “so warm you need to wait a minute before eating it” level. And as someone who puts soup in the microwave until it’s practically a boiling volcano, I appreciate that. I’d rather things be too hot and I have to decide between practically drooling as I stare at it waiting to eat or risk losing a layer of skin on the roof of my mouth by jumping the gun.

I chose the latter option with the homemade chips and dip that we ordered as an appetizer, and even though my mouth is a bit unforgiving of that at the moment, I can’t say I regret it. I had never had a hot potato chip before, and it was amazing. I would go back to Delanie’s for the chips alone. Seriously. Although we all agreed that we would’ve preferred some sort of french onion dip to go with the chips, instead of the two options of ranch and, well, something- that-wasn’t-ranch-or-french-onion-but-was-still-tasty-even-though-we-weren’t-really-sure-what-it-was that came with the order. I just ate them plain, but I’m kind of weird like that.

So, yes, all in all, this place is definitely at the top of our favorites list. From the atmosphere, to the food, to the prices – everything was amazing, and we’re already talking about how soon would be too soon for us to plan a return visit. And don’t think we didn’t take notice of the what-looks-to-be-amazing-when-not-covered-in-snow-and-its-20-degrees-out patio outside the bar area. I’m already predicting we’ll spend many an evening there once the weather changes and we can actually be outside without the air hurting our skin. Thumbs up.

OMG are his eyes actually open? Must’ve been the two grog limit. 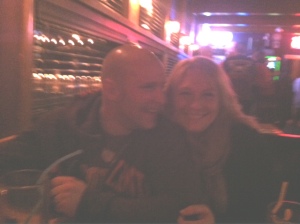 Who is Shane laughing at?

(ps – we would’ve taken more pictures, but it was really, really dark in there. Like hold the menu to your face to read it dark. Which is fine overall, but not when you’re trying to be awesome reviewers. Ha. And it also probably doesn’t help that the phone on my camera kind of sucks. But whateves.)

Picked by: Steph
Drinks: While a menu or actual printed list of some kind would’ve been helpful, at least the staff doesn’t get put out at having to rattle names or descriptions off at you. And you can meet friendly people at the bar when going to look at the beer cooler.
Food: Delicious. Great selection of bar food, specialty dishes, apps and salads. Get the chips. For real.
Service: Fabulous. And I’m not sure saying that because we had the privilege of being waited on by one of the owners.
Overall: I think our previous top placeholder has been dethroned. Especially once patio season hits.