This post was originally titled “WTGW 3/5/14: FlipSide Burgers, Hudson.” But then I realized I was going to have to work late on Wednesday this week, so we had to switch nights (strike one) … OK, we can roll with that … Until we get to the restaurant, and there’s a 45-60 minute wait for a table. Apparently Thursday is the new Saturday night in Hudson. Or, actually in all honesty, based on the size of the place, I’m going to guess probably the only time you can get a table there without some sort of a wait is on a random Tuesday at 2:30PM, but whateves. So, yeah, there’s strike two for our evening. Rats.

Lucky for us, however,  there were a couple of other dining options in Hudson’s “First and Main” shopping area that meant we didn’t even have to move the car, so we chose the 3 Palms Pizzeria for our WTGT outing last night.

So the first thing I noticed as we sat down was that there were lots of table with children in the place. As in, I think we were in the minority because we didn’t have a small person under the age of 10 seated with us. But that being said, it wasn’t overly loud or obnoxious, and unless you really looked around, you probably wouldn’t even notice. Apparently this is Hudson’s version of a “family restaurant.” And something tells me some of those kids could pronounce the Italian names on the menu better than we could.

Given the amount of children, the first question we had was whether or not the placed served alcohol … or, rather, I think it came out more of a warning than a question (“They BETTER have alcohol here!”). Perhaps this could explain why all of us in the WTGW group are childless.

Anyway, the answer is yes, they do have alcohol – full bar, although a limited list on the printed menu and also a limited beer selection. Ted had an Italian beer whose name I wasn’t even going to try and remember. Shane and Amanda tried the Limoncello Iced Tea  – which I had been eyeing up as well, but decided to not go with our usual “3/4 of the table orders one thing except Ted who always gets something different” and had an Espresso martini. Everything was good … but take note, there are no prices on the drink menu, and at the end of the night Shane and I discovered that two rounds each pretty much equaled our entire tab from last week at Johnny Malloy’s. So use caution. 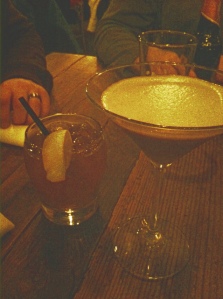 That’s $17 staring you in the face

Shane ordered the bread plate as an appetizer, which I wasn’t going to argue with because I can’t get enough of carbs lately. It’s like the opposite of the South Beach Diet. I didn’t care for the bread with peppercorn, but the regular Italian bread was good. Ted tried the fire roasted hot peppers as an appetizer, and said they definitely weren’t lying about the “hot.” One of the peppers apparently had all the seeds in it for the entire dish. So that’s a fun surprise.

The main dish of choice at 3 Palms Pizzeria is, well, pizza (surprise!) – so if you aren’t looking for that in some fashion then this probably isn’t the place for you. All of the pizzas on the menu have fancy Italian names, and are made the traditional Italian way with fresh mozzerella, not the American way with a crap ton of shredded cheese and meat toppings. They do have a couple of sandwiches and some salads on the menu also, but not a huge selection. It might’ve been nice to see one or two pasta dishes, but unless I overlooked those somehow I didn’t notice any.

So pizza it was for the table. I had the Puttanesca, minus anchovies but with Italian sausage. I’m glad I added the sausage because that seemed to be the only flavorful part. Ted had the Rapini, which probably rates as the first time I’ve ever seen broccoli on a pizza. He also said it didn’t have much flavor. Amanda had the Polpettina, and said even the meatballs had no flavor. Are you seeing a theme here? Maybe us Americans with our shredded cheese and 15 kinds of meat are actually on to something. Just saying.

So I’ll have pizza, with a side of pizza please.

The one dissenter of the group, Shane, apparently got all the flavor on his pizza, the Diavola. I tried a slice of his, and let me tell you, when they say spicy salami they aren’t kidding.

That’s what she said. Ba-dum-bum.

(OK, come on, even I laughed after I innocently typed that and re-read it. There’s more of a joke in there somewhere, but I don’t what to completely offend everyone.) 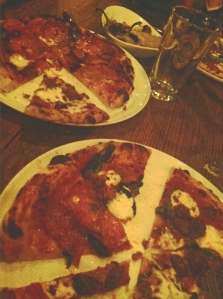 One of these has flavor, and one does not. Choose wisely.

So overall, the atmosphere of the place was good – which is something I think we lacked last week, so we definitely made up for it this time around. It was full but not crowded, and we didn’t have to wait for a table so that was a big score for us. And as I mentioned, despite all the kids it was still relatively quiet and intimate feeling. We all commented that we liked the lighting and the way the seating was arranged – it gave a very homey, cozy feeling. And you gotta love the abundance of BMWs, Audis and even the occasional Porsche seen navigating the streets outside the windows. Fancy.

But even so, the food just couldn’t quite bring the place into one of our top slots – I mean, when Shane doesn’t initially put the pizza into his coveted “Top 5 list” (I told you we have one of those for everything) it’s most likely not going to make the cut into the revisit basket.  Especially after dropping $80 for me and Shane on two pizzas, two rounds of drinks and an appetizer. I mean, fancy or not, it’s still pizza.

Since the night was young when we left, we decided to make the night a double and grab a drink somewhere. We tried to head back to the coveted FlipSide (I mean, for real, they have alcoholic milkshakes. How can that NOT be a good way to end the night?) – but they still had people packed into the waiting area like sardines and no open seats at the bar, so no thank you once again. Rats.

After a drive around the block we decided to circle back to Kepner’s Tavern, right on the main square in downtown Hudson. And although not as swanky as the area around the corner by 3 Palms, apparently this is still not on the “other side of the tracks” just yet, as we passed on our way into the bar a minivan parked on the street with its side door completely wide open for the world. Huh. So I guess it’s so safe here that not only do you not have to lock your doors, you don’t even have to close them! Sweet! (Side note: about 20 minutes into our visit, someone eventually popped their head into the bar and asked if anyone owned said open bed for the homeless, and another guy at the bar who looked like he had arrived long before us scrambled to run out and close it. Which made us feel like horrible human beings for totally laughing about it and then not mentioning anything as we walked in. Oops.)

We only stayed for one drink at Kepner’s, because it seemed that once again we’d found our way back to the land of the not-nice-to-strangers. The bartender wasn’t rude, but he wasn’t especially friendly either. When we asked what he had on draft, he pointed to a not-very-noticeable sign up above his head, rather than just read off the 10 or so names. Thanks dude. And quite obviously everyone in the place was interrupting his nightly watching of Impractical Jokers, since that’s what he spent the majority of his time focused on, and seemed annoyed every time he had to turn down the volume. The place is also way tiny. Like almost claustrophobically tiny. And our group pretty much doubled the crowd when we walked in, so it’s not like it was a busy night and I would hate to be in there when it’s packed. And I guess they serve food, but I wouldn’t dare ask Mr. TV Watcher about specials or kitchen hours. Another probably not a return. Booo.

Picked by: Well, kind of all four of us, after our first choice was a no-go … but initially Ted
Drinks: If you’re looking for a non-craft, American beer you’ll probably be disappointed. Good wine selection, and the specialty drinks we tried were good. Just be prepared that the “they don’t list the prices because you probably don’t want to know” rule applies here.
Food: I understand they’re going for the authentic Italian style, but I think we were all a bit underwhelmed.
Service: Attentive and knowledgeable.
Overall: Eh. I hope we weren’t just influenced because we all originally had our hearts set on burgers and alcoholic milkshakes, but I don’t think any of us will be voting this one onto the must-revisit list.

Next Pick: Shane. And we’ll be doing another Thursday outing again next week, as I’m spending another evening working late on Wednesday. Clearly my employer hasn’t read this blog. Ha.