Conestoga Grille, in the heart of Downtown Canton. Which felt like a million miles away since of course we were all hungry. Shocker, I know. Then we had to warn Ted about a divided highway after last week’s adventure. Because this is definitely the group to be around when it comes to forgetting past mistakes.

See also: Gus’ Chalet, the place with two things on the menu, and a very aptly named but memorable-for-the-wrong-reasons place in Richfield.

The front of the Conestoga Grille pretty much immediately screams dive bar, thanks in part to a dark street and a wildly  flickering sign in the front window. And that was even before we saw they have cans of Hamm’s on special.

Insider tip, once again the window table will look alluring, but unless you want to wear your coat or not feel your nose throughout the meal you may want to rethink that seating option.

If you don’t like IPAs you’ll want to steer clear of the draft beer options. But they did have White Claw, so there’s that. And of course Hamm’s.

In this week’s edition of let’s interrogate the server about the menu, we learned that the pizza and the wings are good, and the burgers are a top seller. When Jason upped the ante and asked for a further definition of what was better between the burgers and the pizza, she claimed that was a tough call because, well, she personally likes the pizza … but they sell a lot of burgers … but she’s never actually tried one of the burgers there before so she couldn’t really give us an honest opinion.

OK then. If you can make sense of this then you get a medal. Or a burger. We’re not really sure.

Jason ended up getting the Bacon BBQ burger. If that tells you anything.

Meanwhile Cassi got the 9 inch pepperoni pizza with a side salad. If that also tells you anything.

In what I suppose was an attempt to be helpful, the server turned to Jason after Cassi ordered and basically said “well, there you go, since she ordered a pizza and you got a burger then it seems you can try them both after all.”

And thus the server learned a very important lesson about how this group doesn’t necessarily share food.

Although it worked out OK, because they each liked their respective orders.

I chose the other on the list of best sellers, the wings. I got 10 of the garlic parm wings.

And they didn’t disappoint. They were decent sized, and had good flavor.

I also got a side salad, which was, well, a side salad. There’s not much to say about vegetables in this group.

Shane got the pizza, which he customized with about a billion toppings following an explanation of the menu pricing for such that went a little like the scene at the end of the movie Clue where they’re trying to count the number of bullets left in the gun 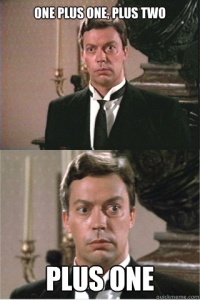 He also got 10 wings. And a basket of fries, which supposedly he was only getting because I was sharing with him but I barely got out the first consonant of “yes” before he decided to order.

Which probably confused the hell out of the server when it comes to our stance on that whole food sharing thing, but whatevs.

Ted got the jalepeno wings. Here’s something fun, they were actually jalepeno parm wings, but the menu failed to mention that whole parm thing. Fun, right? I mean, especially for someone who hates cheese. I don’t think I’ve ever seen Ted recoil from a plate of food before, but this certainly warranted that reaction. I think he might’ve reacted less if you’d set down a platter of snakes in front of him.

Which may say something about Ted. Just saying.

But he was a champ and tried them anyway. And admitted that they actually weren’t too horrible. He said the jalepeno was far more evident of a flavor than the cheese, and since the parm was more of a shaving/dusting situation than a giant melted mess, he wasn’t all that disappointed.

But for future reference, they may want to note that on the menu. Also because the rest of the table was a little jealous when they saw what was served and admitted they may have tried that flavor if they’d known parm was involved.

Ted also got the Dr. Seuss burger. In keeping with the theme of his dinner, it arrived with a giant jalepeno on it, the likes of which had a scent that definitely carried across the table. But for his sake, at least that meal was sans cheese. 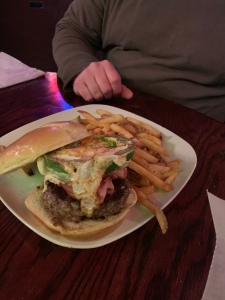 And Ted really liked it. He said that the ham on it was super salty, but the flavor of that combined with the egg and the peppers made it all work. He’s never had something with that many flavors going on – well, that still managed to taste good anyway.

Let’s just say that having two bartenders/servers on the schedule for the evening may have been a little overzealous on the scheduler’s part. There may have been about five other people in the bar along with us this Wednesday evening, and two of them were getting paid to be there. But the trade off to that was that we got decent service, and our server was super nice.

THE HOW (much we paid)

So remember that whole “this is kind of a dive bar” and “awesome, they serve Hamm’s in cans” feel from the start of the evening. Yeah, not to much after the bill arrived. I’m not sure in what world the 12oz cans of Hamms should be $3 each, because that seems a little pricey. And $5 for a White Claw? Someone please visit the local supermarket and let them know the case of six cans is – well, let’s just say no one would be paying $30 for that.

Oh, and the pic of our receipt is incorrect, since Jason and Cassi got one of our wing orders on their bill, so that final number should be $10 more. All total, we ended up at like $77 after tip. At a dive bar. Seems a little pricey, no?

THE WHY (they will/won’t see us again)

All that being said, if we find ourselves in the downtown Canton area again I believe we would revisit. The food was really good, one of those rare evenings where everyone liked their meals – which is saying something considering Ted’s unwelcome surprise. And being that the place wasn’t busy so we got great service – even before Shane outed us as bloggers. Dude, we’re trying to keep things low key here. I mean, we’re already celebrity judges for food truck events. Before we know it people will start asking to be in our pictures with us. I’m not sure we’re ready for that status yet.

One of these things is not like the other … and is also not mentioned on the table advertisement either. Hmm 🤔
Here’s a fun drinking game (literally) 🍻: match the person in our group to the color beer you think they likely ordered 🤔
Sometimes we drink our alcohol out of fancy glasses - and one tall Bud Light - and I yell at Ted for removing one piece of the spicy cauliflower appetizer before I’ve had a chance to take a proper photo. 🤷‍♀️
Remember that time Shane lost half of the taste buds on his tongue despite being warned that the fried zucchini would be hella hot, and someone in the kitchen thought it would be a food idea for trust us with steak knives speared into our sandwiches? That was fun.
The great patio tour of 2021 continues, with an evening of fried foods galore at Jerzees in Green. Which, while the patio is really just a glorified portion of the parking lot with nothing much to look at other that the traffic speeding by, the connection to the rest of the bar area makes it a pretty cool option. Let’s just say whoever invented garage doors as a complement to bar patio areas is somewhat of a “let’s figure out a way to take advantage of the nice weather in northern states as much as we can” genius. 💡🤯
You know it was a fun night when we don’t get around to posting about it until the next day 😉 Let’s just say that those flight boards you see rounding out our table were only round #1 🍻