You guys. You know how we’re always joking around that we’re going to go to a place and order ALL THE FOOD because we’re so freaking hungry?

This week we did just that. That’s right – we actually ordered every. single. thing. they had on the menu.

You’ll be far less impressed, I’m sure, when you hear exactly what that entailed. But I’m getting ahead of myself here.

So Shane didn’t venture far this week from his last amazing pick of Theo’s. Although I guess we can just be glad that at least this time there wasn’t an elderly person’s walker greeting us as we walked in. A slightly intimidating maze of doors, sure, but no walkers or sloppily drunk women trying to find their way out.

The Springfield Tavern is smaller on the inside than what it looks. You don’t hear that very often, right? Maybe it’s all the doors. I only needed one hand to count all the tables in the place. And even though they were larger tables, this didn’t seem like exactly the type of place that welcomes strangers to just plop down beside you at the same table a share a meal.

There are seats at the bar, too, but those seemed to be reserved for people barely able to open their eyes.

Ah, Fun Wednesdays, you never disappoint. Especially considering this was the first time out for our special guest Cassi. I won’t be surprised if she opts to never accept an invitation from us on this day of the week ever again.

There’s no draft beer at this place. Slightly surprising, but we all do enjoy a mixed drink so at least there’s that. Ted orders a captain and ginger ale, the rest of us order our other mixed drinks … and the bartender (who is also the server, because, well, I think my living room is bigger than this entire bar) as she walks away recites our order back to us … and has Ted’s as a captain and coke. Ted seemed unfazed.

Cassi: You know you’re getting a Captain and Coke right?
Ted: Really? I don’t think so.

Sure enough, as soon as she makes the captain and coke she yells over “wait, was that coke or ginger ale?”

Cassi: Told you so.

So she makes the right drink – and of course she and the other bartender (who may or may not have actually been on shift, or perhaps was just there hanging out? We never really figured that one out) didn’t let the captain and coke go to waste. Guess those hard of hearing skills can be put to some good use after all.

More evidence that this is definitely a drinker’s establishment: Cassi and I had ordered tequila and sodas, and they asked which kind of tequila. Cassi asked for Don Julio, and they responded that they aren’t allowed to keep that one at the bar anymore because they usually are the ones to drink it all.

So here comes the part where we ask for menus … and are told that they are currently “redoing the menu.” Um, OK. But no fear, we were instead directed to the neon dry erase board above the bar showcasing the two options for food at the Springfield Tavern: burgers (two, with fries, for $7.99), and wings (10 for $9.99). That’s it.

Granted those are usually our staples anyway, but it’s funny how once you’re presented with those as the ONLY options, you kind of don’t want them anymore.

Well, except for Ted apparently, who – when Shane looked around the table and asked if we were OK with this (since obviously his extensive google searching for reviews on this place failed to alert him to this conundrum) – promptly replies “Sure, sounds great to me!”

Well great. Now the rest of us look like jackasses if we say we don’t want to stay. Thanks, Ted.

And so, yeah, we ordered everything on the menu. Shane and Ted – not surprisingly – each got both the burgers AND the wings for themselves, while Cassi and I each opted for wings with a side of fries. 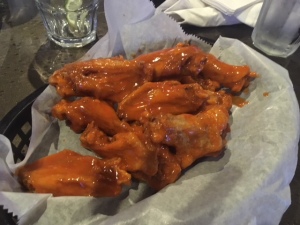 And last but not least, Mild

The wings were just OK. They were pretty large, so that was a nice revelation. So large that Cassi and I each left a few of our 10 in the basket by the time our meals were over. Probably could’ve done without the fries, in that case, but honestly I kind of thought those were the best part of the meal. 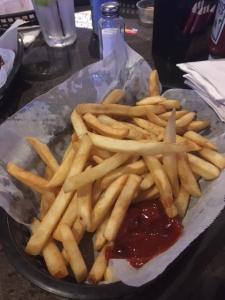 I’m a sucker for good fries fresh from the fryer

I thought the mild wings had some kick to them – and I’m usually in the “yes, I like spicy things” camp. Cassi said her BBQ wings had some heat to them also, which is unusual.

Although maybe we were both just being babies that night, because Ted buzzed through his Hot wings like they were pretzel sticks. Guess they didn’t have the same habenero peppers in them that the place formerly known as Ripper’s Rock House  uses in their drinks.

Shane didn’t say anything about his wings, which leads me to believe they weren’t that great.

The burgers were sold to us by the server as being “smallish” -and so that’s why you get two of them with the meal. So I guess I was kind of expecting sliders to show up at our table. Yeah, no. They were actually more like the size of a McDonald’s regular hamburger. Not huge, but definitely bigger than sliders. Like I couldn’t probably eaten one burger with fries and been happy. But that’s just me. Of course the boys placed their entries for the clean plate club, as usual. 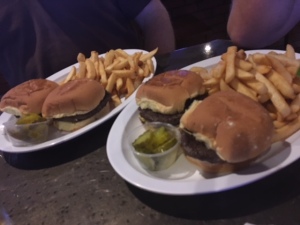 The guys said they were definitely frozen patties, not fresh – again, not really a surprise given the locale and the vibe of the place. But they also said weren’t cardboard flavored. Score? And also that something about the bun made them “sweet.”

Yeah, I don’t get it either, just reporting back what they said. Don’t shoot the blog writer.

We had to ask about the giant prize wheel they have behind the bar, which we could see but not make out the actual prize selections up for grabs. The server told us that it’s $1.00 to spin, and you can win such fabulous prizes as “free parking” (in the lot that we certainly didn’t pay to park in), “$2 fireball shots” (is it still winning if you have to shell out more money to claim it? It’s like those emails promising 45 billion dollars in a South African bank account in your name if only you provide your social security number, birth date and a check for $1,000), and “free beer yesterday” (slight time/space continuum issue there in claiming that, I think). Finally, a place that appreciates sarcasm as much as I do.

Although I think she may have glossed over what happens to the $1.00 you donate to spin. If I had to guess I’d say perhaps it goes the same route as the two “accidental” Captain and cokes she made Ted over the course of the evening.

Feeling lucky that day, Ted threw in $1 to spin. He won free beer yesterday, which he assured us tasted fantastic.

We all agreed that there was decent people watching … and by that I mean there was lots of epic facial hair, and what I can only assume to be regulars that we were glad left well before we also ventured back out onto the roadways. Maybe getting rid of that menu wasn’t such a good choice after all. I should also mention that while the story about “currently redoing the menu” made it sound like this is a temporary situation, the server seemed pretty happy about the fact that there were only two options up for grabs. So who knows if that will actually change back. Or maybe they just need to start offering “free bread and water” on that magic prize wheel of theirs.

Picked by: Shane
Next pick: Steph 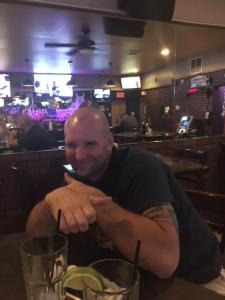