Rittman. Raise your hand if you know where that is.

Yeah, I don’t think any of us really did either. And come to think of it, maybe still don’t?

Although we did discover a giant Morton’s Salt processing facility on our route into town, which given this week was Cassi’s pick we considered for half a second we might just be dining there. 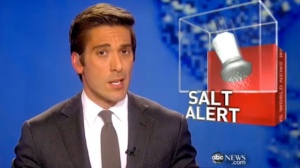 But alas we ended up at BG’s Main Event, which is your typical “just on the right side of divey” bar and grill in a typical small town atmosphere. It’s also aptly named, as, well, there’s not much else on what I assume was the main road we arrived on.

You know what sounded super appetizing? The meatball splash.

… said no one in the history of the world, ever.

Are you kidding me? What marketing genius came up with this extremely unappealing name for something you’re supposed to want to put in your mouth? It sounds like the name of a person or maneuver you try your damndest to avoid at the community pool in the summer.

Also on the non-order list for this evening: the steak. Not because of some hideous attempt at a cute name like “seared cow flank” or “farm animal surprise” or anything like that, but because they were trying to sell us a 10oz steak for $12.99. I mean, really. Have you not seen what Shane considers to be a deal when it comes to meat products?

I think he outright scoffed at the menu when he saw this supposedly economically feasible option.

But they got us on Wednesdays being wing nights, and the price of 50 cents per wing was right up our alley. Spoiler alert: I was the only one of the group to not be sucked into that deal.

Shane also pointed out the other, far less tempting Wednesday special, which is the Hangover Burger … at a whopping 40 cents off of its original price. That’s right, folks. Quite a bargain. Start your savings funds tonight by dining here.

We prefaced our order by telling the server that we liked food, and that we would probably order a lot of it. She retorted that we were in the right place for that.

And so an agreement was forged.

I got the Rhinoburger sub, which everyone said sounded delicious (from the description, of course, not the actual name. I’m sensing a theme with this place). It’s kind of like a Mr. Hero Romanburger – a burger, plus lunch meats like ham, salami and pepperoni, plus lettuce and tomato, on a sub bun. 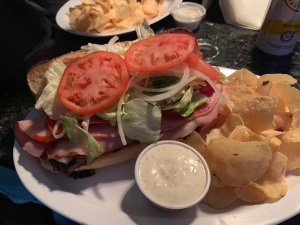 FYI, that’s not chip dip. I mean, not that I tried it or anything

Ted was personally offended that I chose this, because he had kind of wanted to order that same thing … but then he also felt like he had to get something different just for the sake of variety.

He ended up with the brisket, after the server said that the restaurant is known for BBQ.

He was much happier with that than I was with the Rhino sub, let’s just say that much. I mean, don’t get me wrong, my sub was OK … but it was nothing overly exciting. I haven’t had a Romanburger from Mr. Hero in some time, but if memory serves me correctly, I venture to say I would prefer that over what I ate here this evening.

So next week we’ll be at Mr. Hero then?

Ted also got the hot garlic wings. Because, well, they were on special.

Shane got the All American burger, which is basically a bacon cheeseburger with fried pickles on it. Um, OK. So where’s the fancy name for this one? Green Machine Burger? Fried Former Cucumber Burger? Instead they go with All-American? Interesting.

Also, that one pickle looks a lot like a French fry

And wings, although I neglected to take note of the flavor, so you’ll have to use your imagination there. Or, I mean, this is Shane, you can probably go back about four posts here and figure out his type. 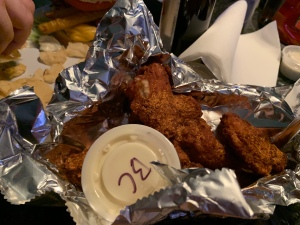 It’s a dry rub, we can say that much

Cassi got 12 boneless wings – six of the Teriaki, and six of the hot garlic.

Plus a side salad 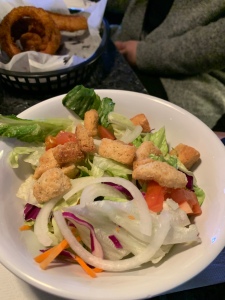 You know how much we love our veggies

Jason got the bacon cheeseburger, which when given the choice of a half or third pound, he responded he would “just” take the half pound  … like he was conceding to the lesser of the two options there. I believe we all hinged onto the end of his order like a broken screen door in a windstorm trying to figure out where that was headed with that statement. Or why he seemed to think that a half was less than a third.

He then proceeded to ask the server what came on the burger. And was told, shockingly, that it’s condiments included bacon … and cheese. On a bacon cheeseburger.

Jason also got six of the honey mustard wings, because, well, he knew he couldn’t not when the rest of the guys had also ordered them.

Honey mustard in the front, plus Cassi’s teriyaki in the back

Oh, and Cassi and Jason split an order of onion rings.

And Shane and I got breaded mushrooms. 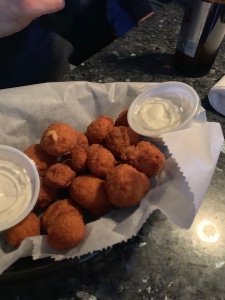 Is that all? I mean, is that enough? It hardly covered the table. That seems disappointing.

Lots of people with plastic pointy things that they kept trying to throw at the wall.

Also known as dart league. Which explains why we didn’t sit at the bigger table that would’ve required us to walk directly  through the path of the throwers.

And judging from this, they take it pretty serious. 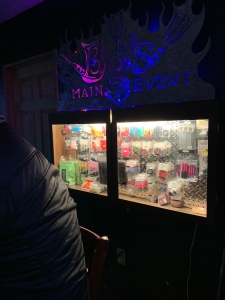 Who knew so many colorful accessories could go into a game of darts?

Our server was decent at first – very personable and attentive, coming over to the table shortly after we sat down to get our drink orders and introduce us to the menus. But when we didn’t know our orders approximately 5.2 minutes after being handed the menu it seemed like she took that opportunity to run out back for a lengthy smoke break. Or maybe a run down the street to the corner store. Who knows. I mean, the good news is that she did come back eventually, and that our drinks never went empty for entirely too long throughout the night. So we won’t judge too harshly.

The place also got fairly busy later in the evening. I mean, it’s also super small in there, so adding about 10 people to our group of five and the league of darters was about all if took to fill the place up – but the point is that you can tell it’s for sure a town favorite.

THE HOW (much we spent)

$48 – for an app, a giant sub with side, a burger with side, wings, and several drinks. Not too shabby.

Bonus: the White Claws were only $3.25 each. Considering we paid $5 each last week, I would call this a win.

In the not-a-win column, it appears we got the basket of onion rings on our bill, and Cassi and Jason got our breaded mushrooms.

THE WHY (they may see us again)

So I think Cassi summed it up best when she stated that her food wasn’t the greatest, but that she would like to drink at this place.

Everyone pretty much gave the wings a big thumbs down, saying they weren’t the best they had ever had. The sauces were OK, but there was too much breading and that made the flavor “off.”

And the rest of the food was just OK.

But the vibe was great and the drinks were cold, so once again if we could transport a place to about 30 miles closer to where we live then I think they would have regular customers in us.

Or, you know, if we every need to make a run out to get some fresh salt straight from the factory, we’ll plan to stop back in.

Picked by: Cassi
Next pick: Steph 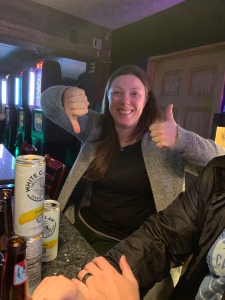 Cassi – thumbs down for wings, thumbs up for atmosphere 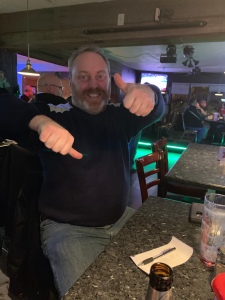 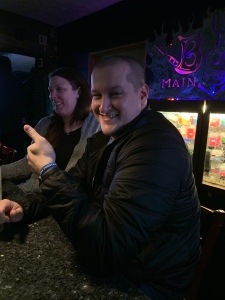