This week’s adventure begs the question: if there’s a national holiday for a beverage but yet the place you’re eating at doesn’t offer a special on it, is it really a holiday?

Technically El Tren is a revisit for 3/5 of this group, but let’s take a moment to break down the numbers: two of us have never been here before at all, three of us have been before but it was when the place was called Nuevo Acapulco (we think? there was some issue on that visit discerning exactly what website was used to find this magical place that supposedly had towers of margaritas but then no one knew what the hell we were talking about when we inquired about them), and out of those three, two have been back since it changed over to El Tren.

Admittedly the two of us who had returned after the name change didn’t have the best luck, but we pretty much just crossed our fingers and hoped for the best this time around.

Because … National Tequila Day. And it was nice enough to sit on the patio.

So in the broad spectrum I guess we can consider this a win? I mean, even though … well … I’ll let you decide.

The What (we ordered)

So as I mentioned, it’s National Tequila Day, which means it’s just a tad sacrilegious to choose anything other than Mexican food, no? I mean even Ted gets a margarita on this holy day.

Meanwhile Shane gets a rum and coke. OK.

For meals, we can break this down again into fractions, as 3/5 of the table chose the fajita quesadilla. Shane and Jason opted for steak, while Cassi chose chicken.

There seems to be a lot of math so far this week. Sorry about that. I’ll just leave you with one more little equation: 0% of those who ordered this dish got what they were expecting once the meals came out. 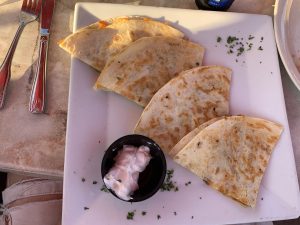 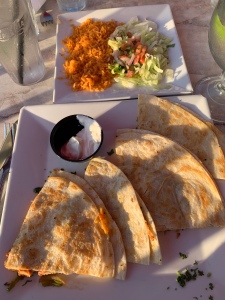 Like, what is that? Did they hear “appetizer quesadilla” and not “fajita quesadilla”? That looks like something you order at Applebee’s. I mean, being married to Shane for as long as I have been now, I can attest that this dish is his go-to order at any Mexican restaurant. And never once has it looked like this.

Except, well, the last time we came here. Oops. Shane said he forgot about that until the plate arrived in front of him. Like “hey what was that place that serves the child-sized portion of fajita quesadilla? Oh, right, this place.”

I got the chicken fajitas. Not the fajita quesadilla, just the regular fajitas. Otherwise known as that dish that gets delivered to the table basically still cooking on the plate so pretty much the entire restaurant can hear, see and smell it arriving at the correct table.

FYI, that didn’t happen here. But, you know, by the end of the evening that wasn’t exactly a shocker to us, since we were kind of just impressed that we got food of some kind brought out.

More on that later. 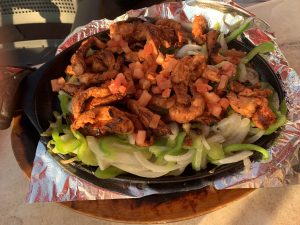 The chicken fajitas were ok – there was a lot of chicken with the onions and peppers – but it was a touch on the dry side. I eventually got some extra salsa to help with that, but let’s just say I was too hungry to wait as long as I would’ve needed to if I wanted it for the whole meal.

And then there Ted, getting some type of burrito.  I missed the name of the dish because I was paying too much attention to the special inquisition he was involved in with the server regarding the type of sauce inside the burrito and the possibility of it being cheese-based. Here the server was trying to educate Ted on the level of spiciness involved with the sauce, when really all he truly cared about was “is it made of cheese?”

That’s right, around Ted things can be spicy to the 1000th degree (habenero peppers, anyone?), just for the love of God don’t let it be made with or include any sort of cheese products.

Ted said his burrito was also really dry. And the sauce definitely had cheese in it. So that worked out well for him.

He also thought his meal should’ve come with rice and beans on the side. Because doesn’t pretty much every meal at a Mexican restaurant? Frankly I think we were shorted like three plates of rice and beans, but, again, at some point we just all agreed I think to be happy we were served anything with the rate at which we both saw our server and had things we ordered or asked for brought out to us.

Shane and I also ordered the tableside guacamole, because we remembered that being like the one thing that went well on any of our previous visits to this place. And I will say that once again, that was the best part of the meal. I mean, on one hand, for $9.95 it better be. But who can really complain when it’s made fresh next to your table and it comes in one of these awesome and much heavier than you think it would be bowls? 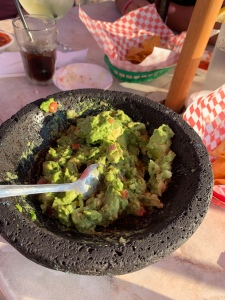 Cassi and Jason got the churry queso. I think in part to taunt Ted after the great cheese inquisition of 2019 during our orders. Because we all know that the one thing Ted loves more than asking to not have it placed anywhere near his meal is to sit at a table next to a vat of gooey, melted cheese, right? 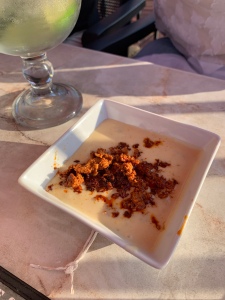 Ironically, after these appetizers arrived, and after we asked twice, it still took a hot minute to get a few more baskets of chips. Because there’s only five of us at the table and two apps that require chips to be consumed. But sure.

We have to admit we were shocked to arrive and find the patio surprisingly empty. Especially considering it was a beautiful night. And they do have a pretty great space outside. And, did we mention tequila holiday?

I’m going to attribute this to everyone else hearing of a tequila special we didn’t and going there instead. Dammit. Next time shoot us an invitation. I mean, why else do you think we joined social media after all these years?

But at least it made for a nice quiet evening on the patio for us. Oh wait, until the gang of children started running around the patio full tilt. So it doubles as a playground, I guess? Good to know.

Because children running uncontrolled in places where adults are consuming alcohol seems like a splendid plan. I can’t imagine any possible scenario where that might be an issue.

For those of us who have visited El Tren before, our main complaint in the past has been the service. Hey, guess what? That hasn’t changed. Hats off to management for keeping stability in the lousiest of arenas. Kudos.

Drinks take approximately six hours each to arrive, so I can only assume they charter a plane and make a quick trip to Mexico to grab that tequila fresh each time someone orders something from the bar.

And then there was this fun little sitcom that took place with my order … so when meals arrived I was served a plate of chicken and peppers/onions, with no rice, beans or fajitas. Not really what I was expecting, but sure I’m trying to be a bit healthier here so thanks for reading my mind, not trusting me on my own and just removing the carbs from my field of vision.

But then about 10 minutes later some guy who wasn’t our server arrived with a package of fajitas to hand to me. Not wanting to be wasteful, I said thanks anyway but actually I’ll skip the fajitas, and can you just bring over some more salsa instead? He said sure … and then disappeared into the Bermuda Triangle of the restaurant, never to be seen again. Maybe he got called oto that Mexico charter for more tequila? Who knows.

So like 15 minutes later when our server finally made her way over to ask how things were, I asked again about some extra salsa. And that ask put me on the receiving end of not one, but two extra bowls of salsa … and another attempt at being delivered a package of fajitas.

Perhaps what we have is a lapse in communication. And they really, really wanted me to have those damn fajitas after all.

But the worst of it happened even later, when the server committed the epic fail for our group: trying to bring us our bills without asking if we needed anything else and just assuming we were ready to go. Because nothing says “I’ve loved taking care of you, please tip me kindly” like shoving customers out the door.

So we ordered another round just because. And the server was clearly annoyed. But the joke was on her because it took about 20 minutes to get that last round (fill up the plane, boys, we’ve got another round of drinks to get!), during which time all we did was calculate the ways her tip was getting smaller, while she still had to keep coming out to check on us.

Ted thinks it all went downhill when we forgot to tip the guacamole guy. I think that may be solid logic.

The How (much we paid)

So, yeah, this was an expensive one, kids. Almost $90 for two people. Hey $5 burger specials from a week ago, we really, really miss you. Now granted about $40 of this week’s tab was alcohol … so, um, what was I saying about no tequila specials?

Also our server, in all her helpfulness to get us our bills promptly before we’d asked for them and essentially shove us out the door, of course got the bills all messed up. Seems the queen of assumptions, in her haste to be rid of us, thought she should split split the guacamole amongst the table, when it was clearly Shane and I who had ordered it and wasn’t about to subject the cost to the rest of the group. So we had her change that, but then when we got the bill back after that we also had Cassi and Jason’s meals instead of our own, plus their app. So they paid for one fajita quesadilla and my chicken fajitas instead of two fajita quesadillas, but we got two fajita quesadillas and both apps.

But our alcohol was right, so I guess that counts for something? I mean, usually that’s the part where people get confused, just because of the sheer amount that gets ordered.

What was I saying about the math portion of this post being finished? Oops.

The Why (they probably won’t see us again)

Well, I mean, unless we’re desperate. Or once again forget our past experiences. This one pretty much got an “eh” all around from our group. Well, except Jason, whose thumbs up makes me think perhaps he either wandered off to join another group for a while or maybe his drinks were made with the extra special tequila shipment.

I will admit that the patio atmosphere was perhaps worth the price of admission … or maybe at least the price of the guac and a couple of rounds of drinks. But then factor in the great invasion of the children and the amazingly awful service, and, well, let’s just say it would need to be a perfect storm of being on that side of town, not being very hungry and just wanting to sit on a patio that may or not be peaceful for us to actually consider going back there.

Picked by: Cassi
Next pick:  Steph