Oh Tommy’s, where have you been all of our existence? Or, at the very least, where were you last week as we were experiencing the thrill of unreliable service and feeling like we inconvenienced bartenders as we asked them to let us know what the White Claw flavors might be?

Ironically, as it turns out, we were pretty much right around the corner. Just going to show that it’s amazing what different worlds exist probably not even a half mile away from one another.

I mean, there’s still pizza. But that was pretty much the only similarity.

Speaking of pizza, do you think that symbol next to the numbers 9, 12 and 16 denotes the size of the pie, or the number of slices? 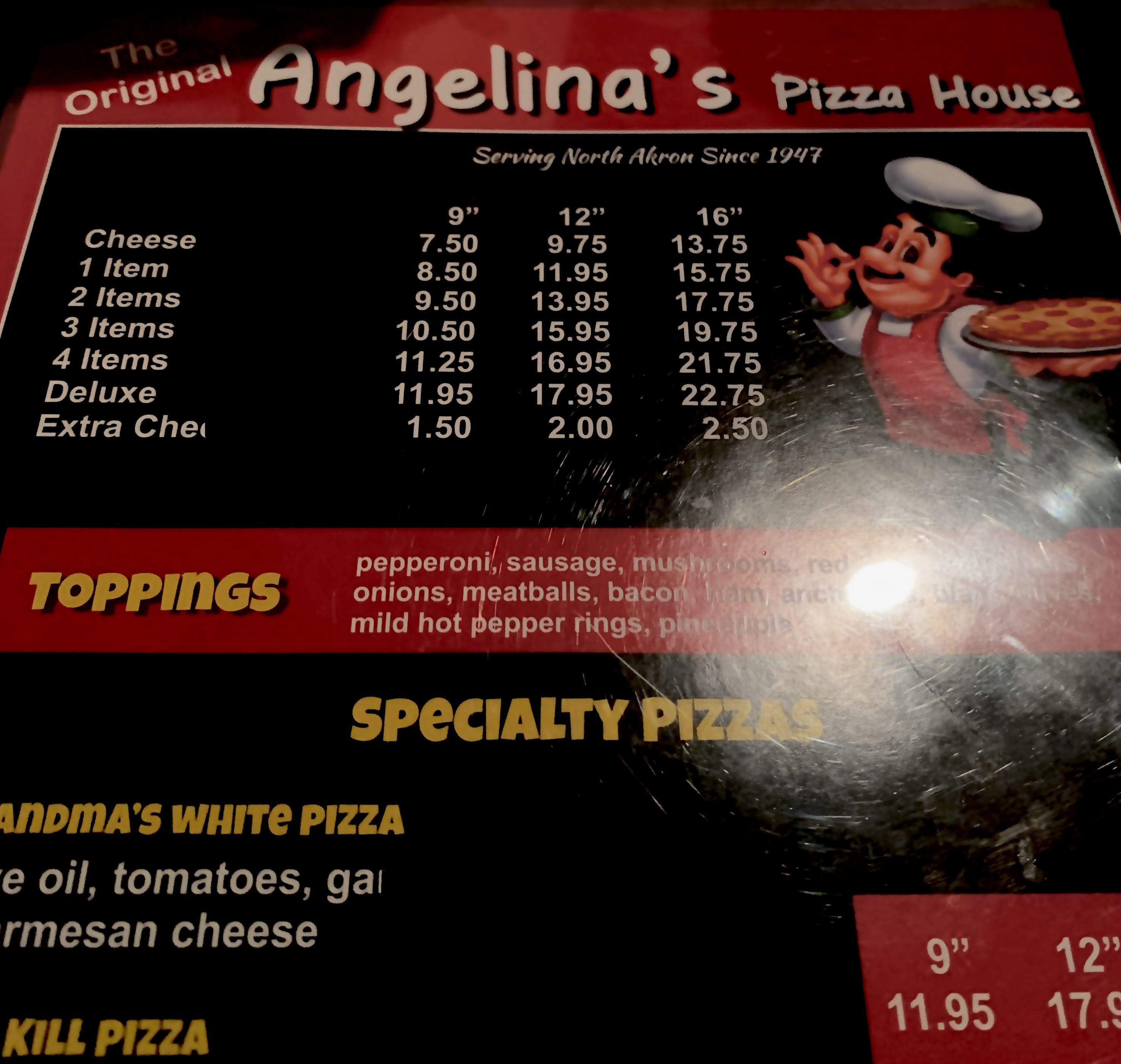 Because we heard nine slice pizzas are kind of a thing now, especially on this side of town.

If you don’t get that last line, I implore you to go read last week’s post. It will make more sense than you want it to after that. And quite honestly if you’re going to continue to read this blog, you probably want to be in on this little inside joke, as chances are this isn’t by any means the last time we’ll reference it. We like to beat these things into the ground with this group.

I mean, anyone up for a trip to Gus’ Chalet? No?

Tommy’s is definitely off the radar, and by that I mean it seems we might be about the only people who realized it was open on a Wednesday night. Well, I take that back – there were a few people who came in to pick up take out orders. They definitely seem to be busier at the to-go counter than on the bar side of the space. But other than the five minutes or so each of those customers stayed in the place to grab their orders and pay, it was pretty much just our own little private party with the bartender.

Not that anything is wrong with that, of course. Again, if you want to reference last week, when we couldn’t get the attention of not one, not two, but three different bartenders … it was a relatively nice change of pace to be the sole apple of this person’s eye for a few hours.

Pizza. Duh. It’s apparently the new “burgers and wings” of this group.

Jason, Shane and Ted all decided to take their chances for another week with this option, even though the nine slice pie was apparently not something they acknowledge at this particular locale.

Ted got the Road Kill pizza, which is just basically a less fancy way of saying “give me a pizza with every kind of meat possible on top of it.” 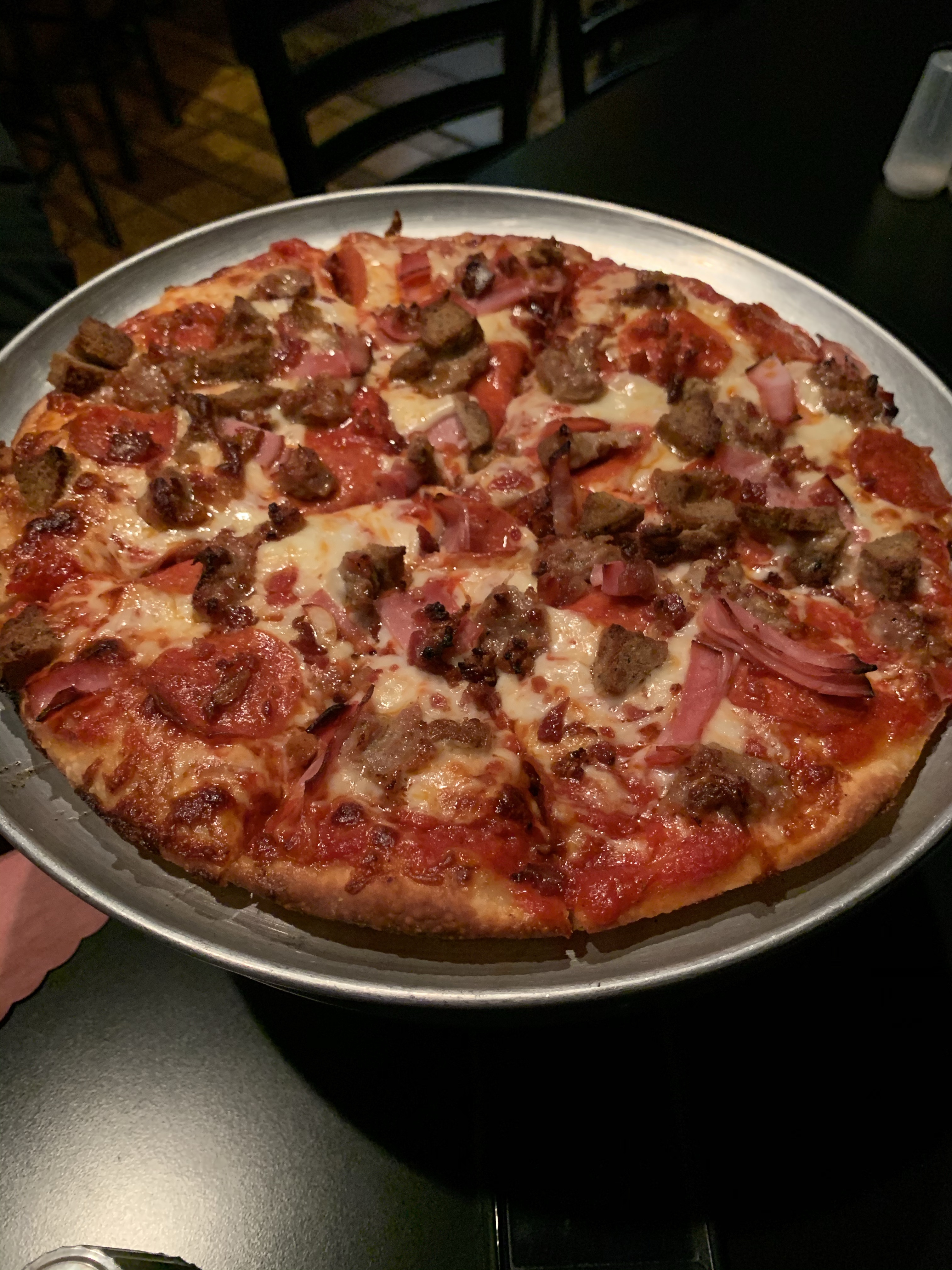 Shane got the Deluxe Pizza.

He got a smaller size pizza because he also wanted to get six of the Jumbo Garlic wings. Old habits die hard. 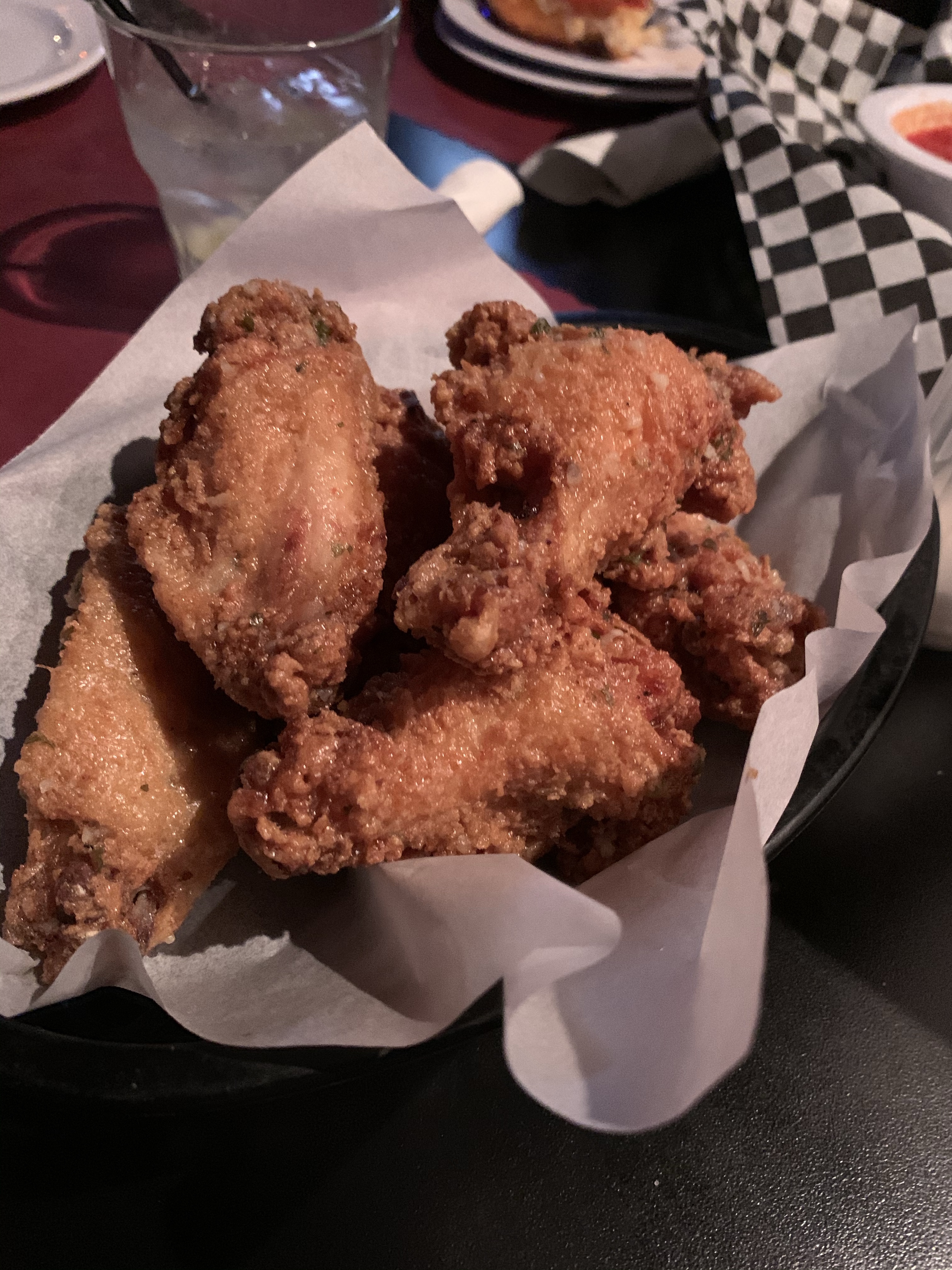 I don’t think there was a fancy name for Jason’s pizza because he just picked the size and added the toppings himself. His had pepperoni, sausage and mushroom on it. 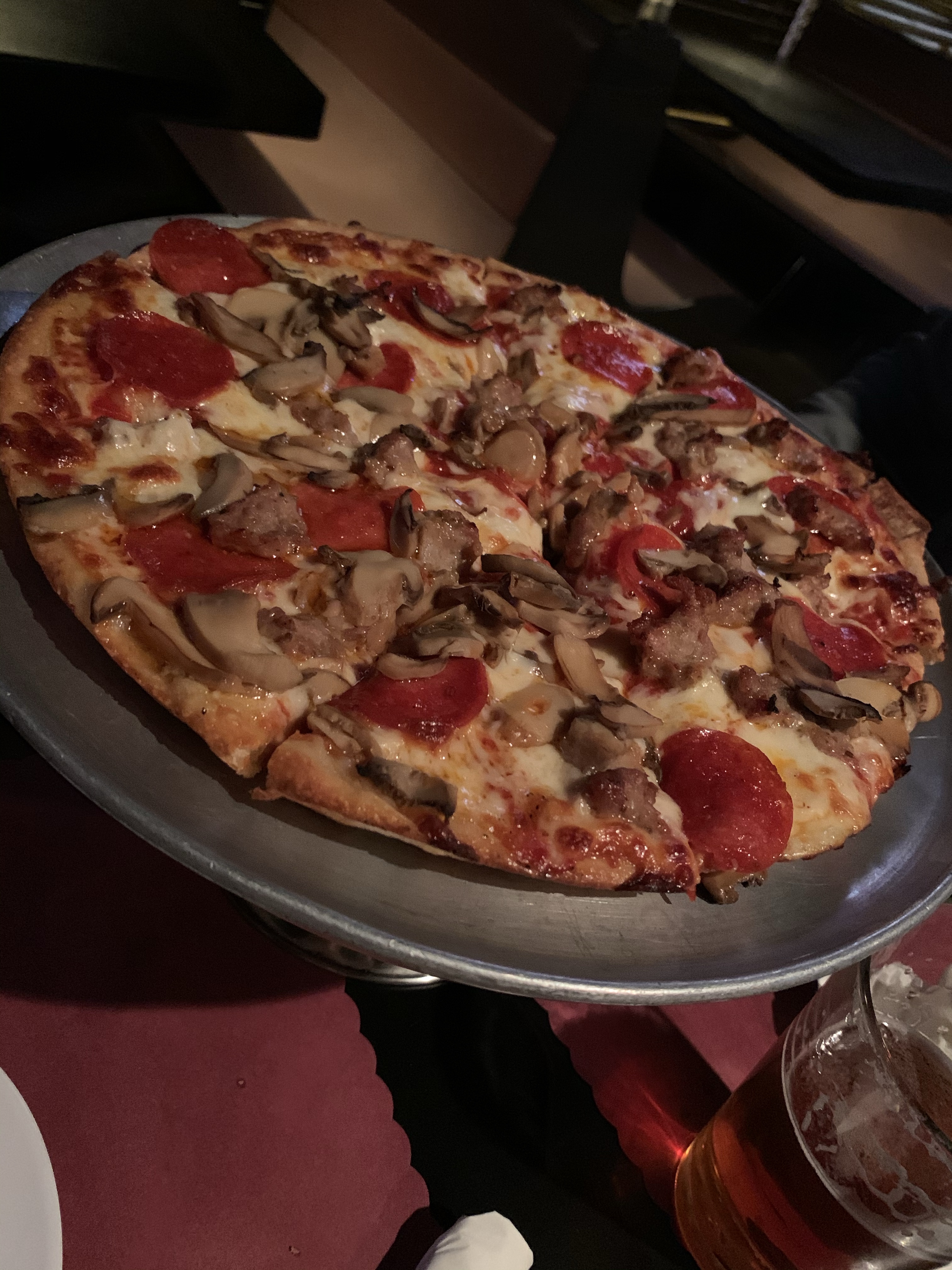 Jason and Cassi also got the garlic bread to start off with. They opted for the small order, which is only four slices. FYI, the large is eight slices. Which sounds excessive but I guess for $11.95 it better be.

Cassi and I both got Italian subs for our meals, after Cassi took over for Shane in the usual bartender inquisition of the menu and asked what he liked best. He was adamant about the Italian sub being his absolute favorite on the menu, so despite throwing a bit of a wrench in the plans since that wasn’t something either of us were even considering before he said it, we both decided to try it. I mean, what the hell, right?

I also got a side of fries, since the menu stated they were “fresh cut,” and we all know that’s like advertising that they’re made with liquid gold. Also the guys were talking about McDonald’s fries on the drive over, so in full disclosure that may have influenced my decision just a tad as well.

Taking over for my husband in the category of “trying to order as many items on the menu as possible,” I rounded out the order with an attempt to be healthy by also getting … you guessed it … a side salad. Which I debated about because it was $5.95, a seemingly somewhat exorbatant price for a salad meant to accompany your meal and not be the only item on it. When I asked if it was giant, that was because I was slightly scared of what might arrive. 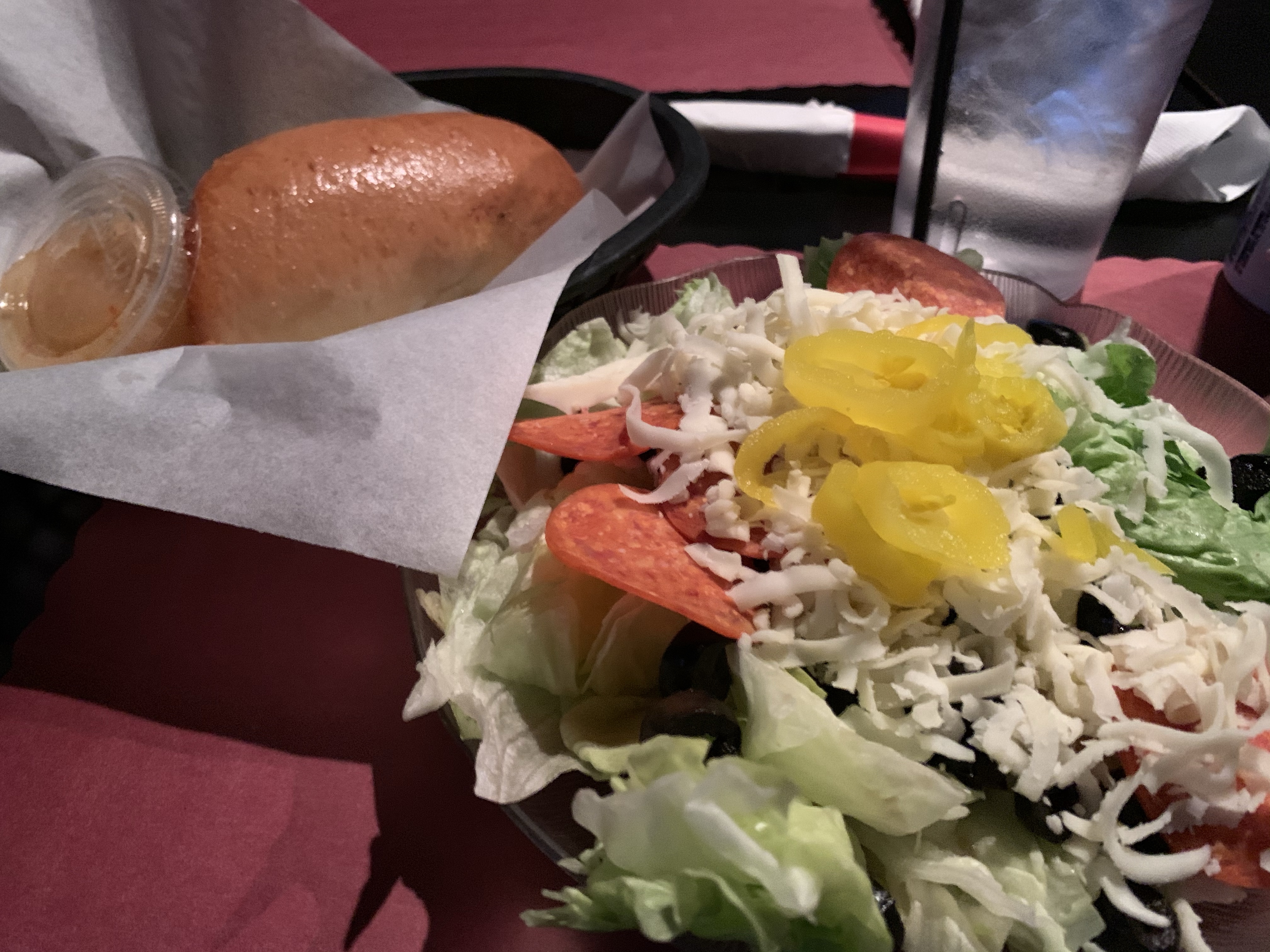 It certainly wasn’t giant – which may have made me slightly put off about the price, except that the pepperoni, mozzarella and black olives wore me down. I mean, $5.95 for just some lettuce and cucumbers would’ve been disappointing, but this was by far more acceptable.

Hey, here’s a fun question that I bet you’ve probably never truly pondered before … what would you do for fresh, delicious, soft bread?

But I ask that, because I think it’s pretty clear in this group that some of us would probably be convinced to jump from a tall building or walk through a pit of fire if that prize were awaiting us at the other end.

Fortunately in the case of Tommy’s, no one is requiring American Ninja Warrior style heroics just to get our food, but I think we would all agree that some lengths would be unquestionably scaled in the future for anything that arrived in front of us in some sort of carb-laden form after this visit.

From the garlic bread to the pizza dough to the piece of bread that came with my salad, we were definitely ready to gobble up anything doughy that came near our table.

I think I called my salad roll “fluffy like a cloud.” So, you know, there’s that.

Shane was happy because the wings that were advertised as “jumbo” on the menu most definitely arrived looking so, so that was a win. We also won’t have to worry about being visited by vampires any time soon, because I think the amount of garlic they were made with will keep us all under cover for some time. That scent certainly wafted to the opposite end of the table pretty quickly.

And since we all left with to-go boxes at the end of the evening, we weren’t complaining at all about the size of the meals for the prices that we paid. 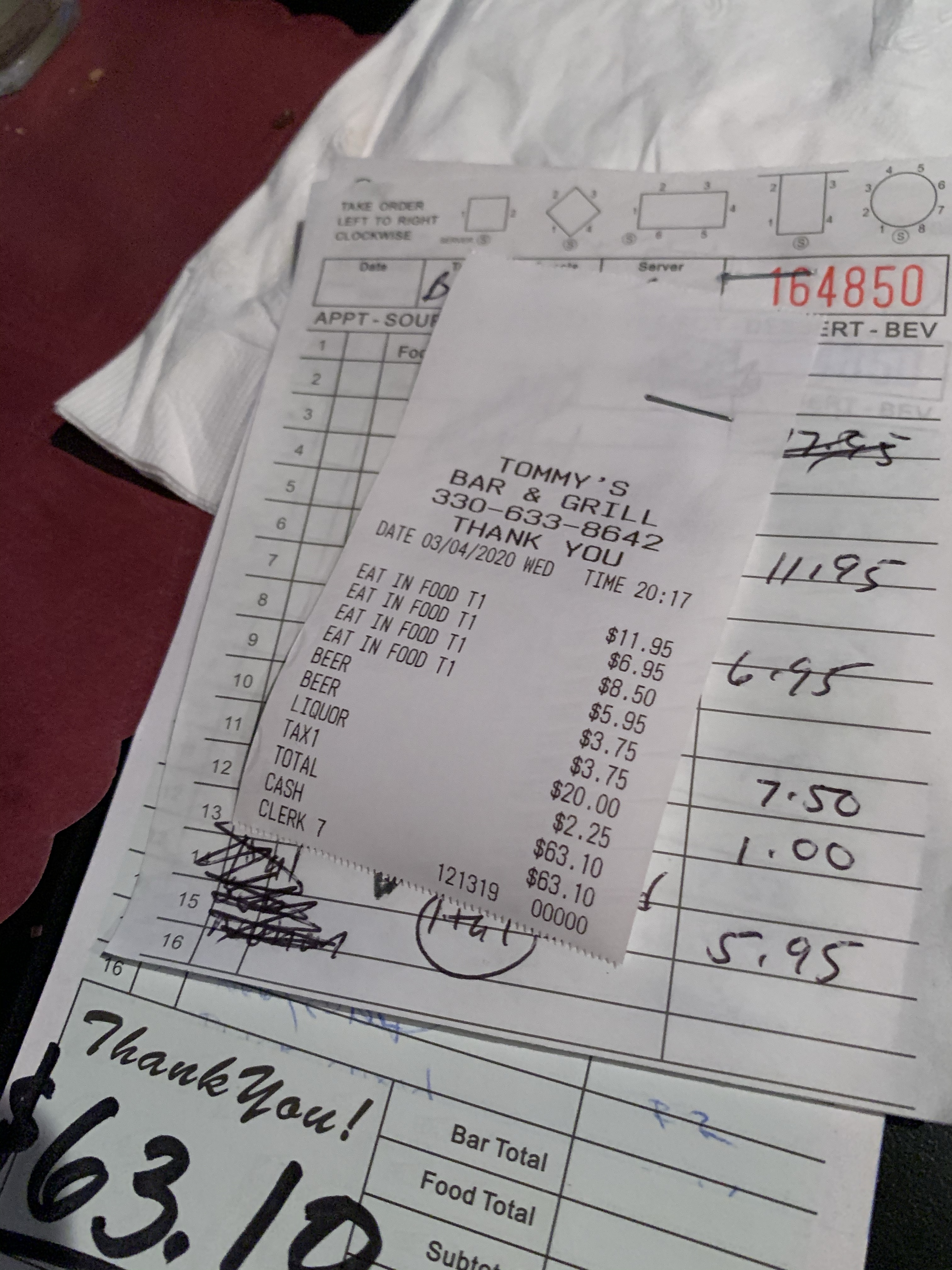 Also now that we’re tried and deemed the bread and wings truly delicious, this item on the menu that’s actually named the “delicious chicken dinner” holds a lot of street cred. Who volunteers to get that the next time we come in?

I’m sure that Tommy’s will be seeing us again sometime soon. Everything we tried was good, and the service was excellent. I mean, I realize we were practically the only ones there, so it would be interesting to go back when it’s busy and see if that changes things – but honestly I don’t think it will. It seems like the kind of place that just takes care of people no matter what.

Picked by: Shane (as his “make-good” for the forced pick of awfulness from last week)
Next pick: Cassi